The predictable segue of production company credits have not concluded at the beginning of James Mangold’s beautifully crafted “Ford v Ferrari” when the rumbling sound of a racing engine being revved floods the theater.  In a moment mildly reminiscent of John Williams’ two note, muscle-clenching theme from the classic Peter Benchley/Steven Spielberg classic “Jaws,” the audience is put on notice that this is going to be a deep, emotional and dramatic film.  They’re right.

A presentation of the monumental battle between Ford Motor Company and Scuderia Ferrari for world racing dominance at Le Mans, France, “Ford v Ferrari” pits corporate politics and posturing against the deeply flawed, but intensely compelling personalities of talented individuals who made that dream come true.

As Carroll Shelby, the driver turned race car manufacturer whose Cobra creations morphed into the Ford racing program, Matt Damon charms, challenges and reflects the intense pressure that millions of dollars and massive pressure can bring on one individual. His candor with Henry Ford II, referred to behind his back as “the Deuce” is successful in keeping the dream of Le Mans dominance alive, even in the face of the inevitable failures and mistakes of high-stakes motor racing.  Almost … that is … because the climax of the 1966 24 Hours of Le Mans was a 1-2-3 Ford victory, but not without a personal cost. 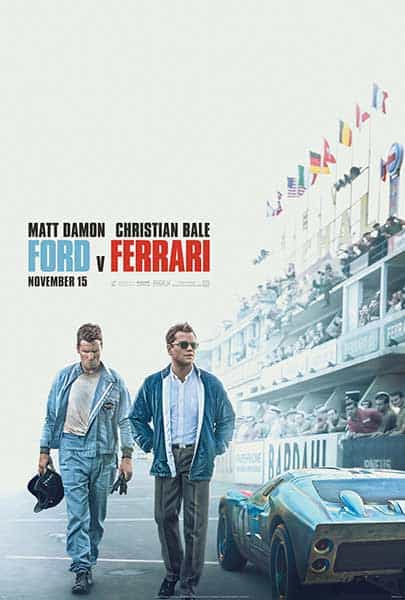 The character who paid the heaviest penalty in that battle of titanic egos and astronomical budgets was a brilliant British engineer and racing driver Ken Miles.  The performance of OSCAR winning actor Christian Bale in the role of Miles is seamless.  He truly becomes the character, from tender father to his young son, played by now seasoned actor (at 14) Noah Jupe to honest, caring and almost playful husband of Mollie Miles, presented with strength, purpose and great comic timing by Caitriona Balfe … to brilliant, thorny, fiercely dedicated racer who fights his own wars while battling his own demons.

Since this film is a dramatic presentation of a complicated, but very public sequence of events in the early to mid-1960’s, there are characters who are critical parts of the story tapestry that cause even those with little knowledge of auto racing to experience “Aha!” moments. Lee Iacocca (Jon Bernthal) navigates the treacherous world between Henry Ford II and Enzo Ferrari (Remo Girone) in a deal that goes horribly wrong and creates the epic battle waged at Le Mans.

For a two and a half hour fevered-pitch journey through personal conflicts and friendships, the struggles of corporate titans and the sheer adrenaline rush of 200 mile racing experienced through the windscreen, “Ford v Ferrari” is superb entertainment. It’s rated PG for some language. In wide release, “Ford v Ferrari” is playing at The Moviehouse in Millerton and the Lyceum Cinema in Red Hook – both in New York.  It is on screen at the Bank Street Theatre in New Milford, CT.