Sequels can be dangerous things.  What may have energized an audience for “Frozen” may be missing in “Frozen II.”  The impact of the musical score in the first episode may overshadow the score of the second time around. Or, the second iteration of the theme can carry some messages of its own that can carry it forward and deftly move away from “I liked the first one better.”

All that being said, “Frozen II” has leaped to incredible numbers at the box office and looks like it will roll right into the end of the year, pushing other revenue contenders out of its way like a dusting of snow.  The reassuring foundation of the film’s success, however, is not just its stellar production, but the fact that there are messages bold and subtle that give the film value.

Returning in her role as Queen Elsa, Idina Menzel has a strength about her rendering of the character that matches the mystical nature of her journey.  It is up to her to find out the source of her powers, and bring with her he sister, Anna (voiced by Kristen Bell), Anna’s companion and would-be fiancé Kristoff the ice harvester (voiced by Jonathan Groff), Olaf the snowman, the comedy relief of the film, played by Josh Gad and Sven the reindeer, who didn’t have to have anyone present his voice.  He’s a reindeer, after all.

Their adventures take them far from the threatened kingdom of Arendelle, a village that looks like a Disney interpretation of a quaint Nordic village … which, of course, it is. As they wend their way into the shrouded woods where the secret lies, the adventures get more exciting, the uncovering of the “back story” that provides the premise for the film continues to add plot in a sometimes confusing way … and the songs keep coming.

Under the masterful animation by the Walt Disney Animation Studio – 80 animators worked on creating the film – there are some messages that may not be all that obvious to younger viewers, but can certainly become the basis of conversation with parents and grandparents on the way home from the theater. 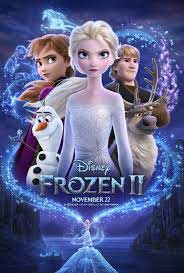 One of the critical moments of the film is underscored with the song “The Next Right Thing.” Supporting the obvious themes of sisterhood, empowerment, acceptance and, of course, love, the “right thing” emphasis is a solid reason to become immersed in the magic of Disney animation and the luscious backgrounds that bear strong resemblance to the terrain of … wait for it …Iceland.

Take the children. Take the grandchildren.  Go as a family, not merely as a “you go to the movies while I shop and I’ll pick you up in two hours” experience.  There’s a message here.  Do “The Next Right thing.”

“Frozen II is in wide release, rated PG for some action scenes and on screen at The Moviehouse in Millerton and Spotlight Cinemans in Hudson — both in New York.  It’s on screen at the Triplex Cinema in Great Barrington, MA and Bank Street Cinema in New Milford, CT.