Let’s begin at the end. “Harriet” is an overwhelmingly impressive film and one that deserves attention, discussion and appreciation across a wide audience.  Kasi Lemmons’ directing is sure, imaginative and unyielding.  The life of Harriet Tubman, played by Cynthia Erivo with almost frightening force, compassion and depth, is a complex story of the obscenity of slavery and the staggering heights one woman will scale to right the wrongs of immoral, narcissistic individuals who have enslaved entire populations.

If your understanding of the legendary “Underground Railroad” that spirited runaway slaves from the southern states all the way to the Canadian border has been confined to a cursory chapter in American History class, the lushly produced film will become a master class in the frenetic, stubborn way that “Minty” Ross … who changed her name to Harriet Tubman when she became free, lived beyond her own safety and made no fewer than 13 missions back into slave country to orchestrate the emancipation of family, friends and total strangers.

The cast assembled around the brilliance of Erivo is so consistent in their portrayals that there is never a let-up in the film.  There are no moments when the audience lost concentration.  There were no “cell phone lights” shining up on disengaged faces checking their email for the 2 hours and 5 minutes the screening takes.

From “Rev. Green,” (Vondie Curtis-Hall) a free man who is the local preacher and the connection to the “railroad” through to the intensely engaged residents of Philadelphia who form the nexus of the railroad organization, there is never a slip. Leslie Odom, Jr. who gave a towering performance in the original cast of “Hamilton” on Broadway is William Still, the man to whom the runaways swarm to help them build new lives.  Janelle Monae is elegant and, ultimately, tragically sacrificed as Marie Buchanan, a free-born woman of means whose boarding house is where Harriet finds a home, tutoring in her new role as liberator and encouragement to become a woman in full. 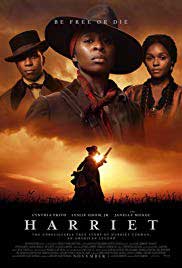 Because the issue of slavery was so contentious in its evil and the struggle to maintain it leading up to the American Civil War, those who owned and brutalized slaves can be hard to portray without becoming stereotypical, cartoonish. The extraordinary task of being human and fully evil is difficult.  Joe Alwyn as Gideon Brodess, seethes with the self-righteous anger of the slave owner and Omar J. Dorsey overlays a most sinister evil in his role as free man/slave hunter.  Through it all, however, they are totally believable.  Abhorrent, but believable.

There has been much discussion about the fact that it has taken this long to craft a meaningful, absorbing and uplifting “biopic” about Harriet Tubman.  We have celebrated far lesser historic characters on film, why has Tubman’s life been kept away from the screen until now?  There may be a plethora of answers, some of them well intended and some of them disingenuous.  The fact remains that “Harriet” is here, now, at a time in our history when holding up strong, inspired and inspiring women as role models can, perhaps, become a motivating spark to some who might otherwise find the summit too hard to climb, the river to wide to ford or the terrors of running through the woods in the dark too daunting.

“Harriet” gives us hope and when the film ends with the biographical notes that are so welcome and essential to completing the story, the audience may well be moved to learn more, explore more, care more.

“Harriet” is rated PG-13 for some violence.  It is in wide release and playing, locally, at The Moviehouse in Millerton, NY and The Triplex Cinema in Great Barrington, MA