The film title, “Hope Gap” may be difficult to remember since it refers not to a character, but a place – a cove on the south coast of England near where Grace (Anette Bening) and Edward (Bill Nighy) have lived for most of their 29 year marriage.  When son Jamie (Josh O’Connor) is summoned home from London for the weekend in order to preside of the dissolution of his parents’ marriage, the story begins in earnest.

The title slyly refers to the period of the film … when a crisis is introduced and the gap in human hope has taken over.  A sense of well being has evaporated.  There is great pain in separation and, one would presume, divorce.  How those closest to the proceedings deal with that pain will often suspend hope … create a gap … and how that gap is filled (or not) becomes the very personal story of each life.

Considered by some critics a “small film” with three dominant characters appearing primarily in three settings – the family home, Jamie’s compact London flat and the open office where he works and engages with two sympathetic friends, the film is the creative result of writer/director William Nicholson’s adaptation of “The Retreat From Moscow” from stage to screen. 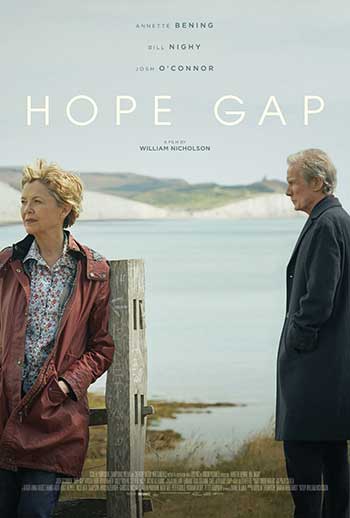 With the popularity of “Marriage Story” during the 2019 run-up to OSCAR qualification, offering another film about a divorce might seem anti-climactic.  When one digs beneath the surface comparisons, however, the roles played with English restraint by Annette Bening and Bill Nighy as the dissolving couple bear little resemblance to the characters portrayed by Adam Driver and Scarlett Johansson.  Edward (Nighy) is taciturn, Charlie (Driver) Voluble.  Nicole (Johansson) is struggling to create a powerful television career, Grace (Bening) is assembling a collection of classic poetry, kept neatly in a cardboard portfolio.

“Hope Gap” is another, carefully presented view of what happens when a presumptive “’til death us do part” relationship ends up disintegrating and the absence of hope creates a deep, painful vacuum.

“Hope Gap,” the coastal cove, is well used by cinematographer Anna Valdez Hanks who employs helicopter and drone photography to skim the waves, explore the tidal pools and present the starkness of the white cliffs.  The interludes provided by these images create subtle moments of transition as the struggle to regain hope does not end with a resounding symphonic chord, but a reasonable statement that as pain begins to ease, hope returns and life goes on.

“Hope Gap” is rated PG-13 for language and is in wide release including The Moviehouse in Millerton, NY.