“Jojo Rabbit” is an emotional rollercoaster of a film.  It has light headed moments of silliness and deep dives into tragedy.  It has vaudevillian comedy and the most tender moments of love and loss.  It is entirely — from opening titles to closing credits — worth the ride.

Taika Waititi, writer, director and co-producer of “Jojo Rabbit” also appears in the film, as none other than Adolf Hitler as imagined by the ten year old Jojo Betzler, a boy conflicted by his apparent desire to become a full-fledged Nazi and the coming of age that is very much a part of the rollercoaster ride.

The setting is Germany in the final days of World War II.  Jojo endures a weekend Hitler Youth camp managed by Captain Kleinzendorf, played with deft comedic touch by Sam Rockwell.  Trying to overcome the derision heaped on him by the other children in the camp, Jojo is encouraged by his imaginary friend Adolf and manages to steal a hand grenade.   Attempting to throw it for dramatic effect, the grenade bounces off a nearby tree and Jojo ends up in hospital with facial wounds and damage to one leg.  Sound dramatic and tragic?  It’s really played for laughs throughout the rest of the amusement park-like ride. 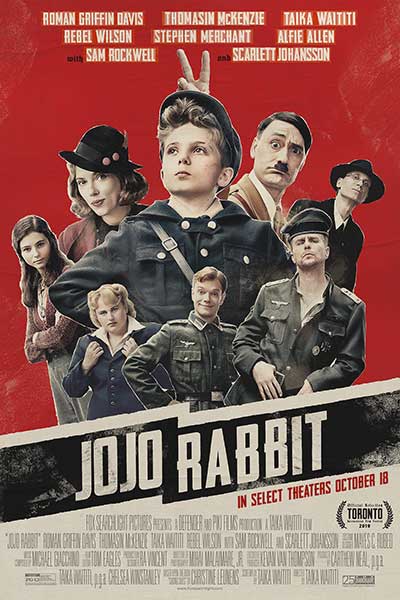 Kept from school while his injuries heal, Jojo first is assigned a menial job by the now-demoted Kleinzendorf spreading leaflets and posters. At home, he makes the startling discovery that his mother, played with great flare by Scarlett Johansson, has hidden away a young Jewish girl — Elsa Korr — in their attic.  Elsa, played gently and with great courage and charm by Thomasin McKenzie, becomes quite a challenge for young Jojo.  Should he report her?  Would that bring the Nazis down on his mother?  Can he even let his mother know that he and Elsa begin to have strangely touching meetings on a regular basis?

Winner of the top prize at the Toronto International Film Festival, “Jojo Rabbit” is distributor-dubbed a “satirical black comedy.”  Is it too soon to laugh at Nazis?   Apparently, that train left the station years ago.  Mel Brooks accomplished that feat twice, first on film (1967) and, then, on Broadway (2005) with “The Producers.” Brooks won an Academy Award for the film script and the play took him 12 TONY Awards.  So much for allowing us to laugh at a comical Hitler and bungling Nazis.