And, you think your family is dysfunctional?  A simple investment of 2 hours and 12 minutes with “Knives Out,” Rian Johnson’s truly enjoyable comedy/mystery film will put things in perspective.

An ensemble cast of brilliant actors (among them Jamie Lee Curtis, Don Johnson and Chris Evans) gathers at the Thrombey mansion outside of Boston to sort through the untimely death of the family patriarch, mystery writer Harlan Thrombey, played with expected elegance in flashback scenes by Christopher Plummer.  Each member of the family has high expectations for the reading of Harlan’s will, but each one has had a recent encounter with the old man that puts things in jeopardy.

Harlan met his untimely demise shortly after his 85thbirthday party, an extravagant demonstration of just how crazy some families can be.  The local police have become involved in an effort to determine that the death was suicide, so the questioning of the family and the household staff is critical. The addition of Benoit Blanc, a somewhat mysterious private investigator to the proceedings provides a wonderful quirkiness to the twists and turns. 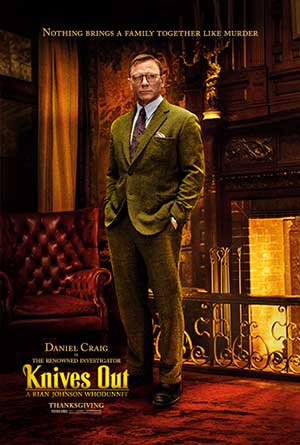 Daniel Craig sets aside his stoic demeanor as iconic James Bond to assume a Southern accent complete with drawl to propel Blanc through the film. He takes an immediate liking to Harlan’s private nurse, Marta Cabrera and, though a suspect, includes her in the search for the truth behind the death.  Ana de Armas is lovely, innocent, confused, frightened and determined as the surprise beneficiary of the disputed will.  Craig and de Armas will be seen again, soon, in Craig’s final James Bond thriller, “No Time to Die.”

The nominations for the 2020 Golden Globe Awards have been announced and “Knives Out” has captured three of the coveted nominations.  Not only is the film nominated in the category of “Best Motion Picture – Musical or Comedy” but both Craig and de Armas are nominated for “Best Actor and Best Actress in a Motion Picture – Musical or Comedy. Since “the Globes” are an early view of the film community’s attitude with the Academy Award nomination process coming soon, “Oscar” buzz is already rising. Whether “Knives Out” and its cast can stand up to the intense pressure of “Joker,” “Once Upon a Time … in Hollywood,” “Rocketman,” “The Irishman,” “1917” and “Harriet” remains to be seen.

The best way to weigh in on the impending contest, however, is to see “Knives Out” as a real contender and a truly enjoyable outing at the movies.

“Knives Out” is in wide release, rated PG-13, including Bank Street Theatre in New Milford, CT, The Moviehouse in Millerton, NY and Triplex Cinema in Great Barrington, MA.