“Little Women” is not a little film.  In fact, it is quite large – in production scope, in reception and in the concentration of creative genius it crams into 2 hours and 15 minutes. And, one more.  It is quite large in heart.

Greta Gerwig, who rocketed to fame and recognition with “Lady Bird” has crafted a script based on Louisa May Alcott’s towering autobiographical novel “Little Women,” then translated it onto the screen as director.  The result of her effort is totally captivating.

Of course, it doesn’t hurt that the cast is filled with amiable superstars, some of whom have worked together in past productions.  “Oscar Buzz,” which is often fed by the marketing machines of the big studios and distributors, seems to have gotten it right this time.  Saoirse Ronan fully embodies “Jo” as the driven, talented and fully compassionate sister whose three siblings laugh, fight, cavort, mourn, celebrate and live fully as a loving family.  Another Academy Award Nomination for her would be no surprise.  She is magnetic. 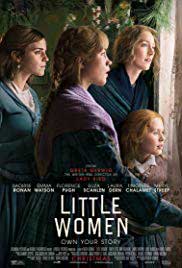 Laura Dern, as “Marmee,” the mother of this clan who steadfastly waits for her husband to return from the Civil War and fills her time by truly caring for those around her, is as outstanding in this role as she is in “Marriage Story” where she is the driving Los Angeles lawyer who orchestrates the divorce that is the backbone of the story.  Two totally different roles – polar opposites, in fact – that further amplify Dern’s incredible talent.

Each of the other sisters is pitch-perfect in their portrayal of the very different, but totally connected members of the March family of Concord, MA.  Emma Watson, of “Harry Potter” fame is elegantly sensitive as Meg.  Florence Pugh as the artist of the four, Amy, is at one point, totally unlikeable and, at another, completely vulnerable.  Eliza Scanlen as the youngest sister, Beth, is gently charming as the emerging musician and painfully sad as her personal charity leads to her decline.

The casting is so perfect that celebrating the work of Timothee Chalamet or Tracy Letts (whose portrayal of Henry Ford II in “Ford v Ferrari” was sensational) or Chris Cooper or the ever brilliant Meryl Streep only emphasizes how this story of family, coming of age, determination and devotion is told beautifully, with great resolution and with great hope.

“Little Women” is rated PG and in wide release, including Triplex Cinemas in Great Barrington, MA, Bank Street Theatre and Bantam Cinema in Connecticut and The Moviehouse in Millerton, NY.