Clarity above all.  “Marriage Story” is about a marriage that falls apart … right before your very eyes – somewhat reminiscent of the celebrated “Kramer vs. Kramer.”  “Marriage Story” is, however, both unique and worthy of notice beyond comparison.  It is one of the best acted, crispest films to come forward during the current “Oscar season,” and a film to be absorbed.  This is not a “let’s go to the movies tonight and have a few laughs” kind of film … although there are some very funny moments sprinkled through the story.

Adam Driver is clearly at the peak of his acting career … a performance at such altitude that we can only hope the journey continues for years to come.  He is brilliant as Charlie Barber, the New York theatrical director who clings to his accomplishments at the same time that he attempts to cling to his marriage and, most pointedly, his devotion to his young son.

Scarlett Johansson fully embodies the complex role of Nicole, Barber’s wife and leading actress in his theater company.  When the marriage begins to fray and she is offered a part in a Hollywood TV pilot, the family is split between New York and LA.  The distance, the differences and the distress of trying to be civil about a dissolving marriage take their toll in increasingly tense moments.

The supporting cast that writer/director/co-producer Noah Baumbach has assembled in this elegantly real drama are exceptional in their portrayals, edging close to stereotypes, but never blundering into that convention.  These are believable people, each with their own lives, their own missions.  It’s a treat to see Laura Dern, Alan Alda and Ray Liotta in complex roles that each add to the tapestry of the film. 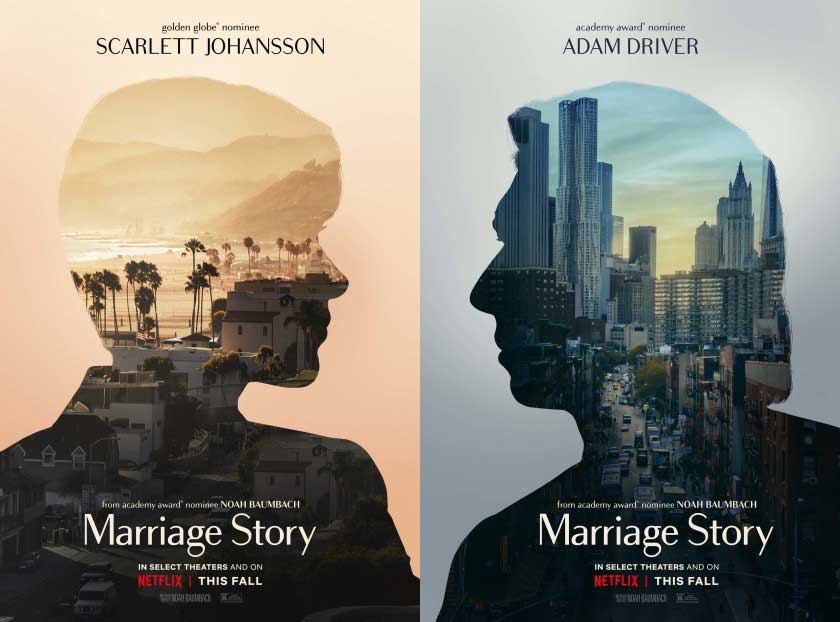 The Golden Globe Award Nominations are out and the film that has captured the most nominations is “Marriage Story.”  Driver and Johansson are nominated for best actor and actress.  Laura Dern is on the list for best supporting actress, music from the estimable Randy Newman is nominated, Baumbach gets the nomination for screenplay and the film, itself, is nominated for best picture- drama.

As a musical aside in the film, one of the most compelling scenes is set in the New York pub where Charlie Barber’s theater company hangs out.  It’s “open mic” night and when the strains of Stephen Sondheim’s  “Being Alive” begin, Adam Driver takes the mic and delivers a poignant rendition of the song.  It is, truly, one of the high points for the film.

Producer David Heyman of “Harry Potter,” “Gravity” and “Once Upon a Time … in Hollywood” fame has, once again, assembled a stunning array of talent to create a film that is an insightful tale, well told.  When the nominations for the Academy Awards appear in the weeks ahead, there should be no surprise when “Marriage Story” appears on several category lists.

“Marriage Story” is rated “R” for language and is in wide release including The Moviehouse in Millerton, NY.  It is a Netflix presentation, so along with its theatrical run, the film is available on the streaming service.