If you missed the winner of the OSCAR for not only Best Picture, but Best Director and Best International Film (the old “Foreign Language” category), then your chance is back.  “Parasite” is playing in wide release, a victory lap of sorts for the richly awarded film by Korean auteur Bong Joon-ho.

Now’s your opportunity to see it … or, perhaps, to NOT see it and let the cinematic mandella swing around without trying to hitch a ride.

The title begs the obvious question – who is or who are the parasites?  Are the poor, disadvantaged Kim family parasites for unfolding a string of scams and hustles on the wealthy Parks family?  Or, are the Parks the parasites for living at the top of the economic ferris wheel with no vision, at all, of what the downside of life is like?  Or, could it be both?  And, if so, then what’s the point of creating a film to celebrate that injustice?

One critic, attempting to mollify the audience, concluded that the film asserts that “we’re all trapped where we are.”  Some might argue that there’s no need for a multi-million dollar feature film to underscore that point.

Or … and we recognize that this may be trying to swim against the critical tsunami … honoring the film provided the startling opportunity for the Academy of Motion Picture Arts and Sciences voters to make a fumbling attempt at counteracting the outcry generated by the absence of actors of color and female directors in the final nominations for the recently awarded OSCARS.  We would suggest … humbly, in fact … that if you had managed to see all the films nominated for Best Picture, you might have landed on another title to take home the honors, setting the social outcry aside in favor of cinematic achievement. 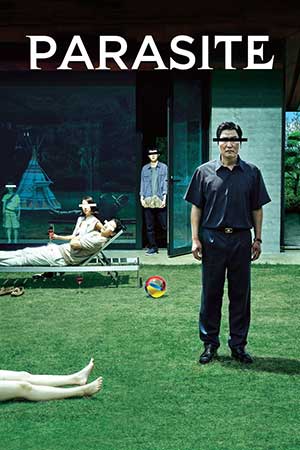 There were some moments … few of them, however … that were engaging and magnetic.  The run through the rain-filled city — down stairs, against towering walls and through the ins and outs of the squalor lived in by the poor provided a mini-travelogue view of a city few have visited.  The elegance of the Parks home (entirely purpose built as a set for the film) was similarly intriguing, offering the invitation to experience the understated elegance of sparely furnished luxury.

The often claustrophobic  scenes of close-up dialog were more than counterpoint to the director’s portrayal of life at the extreme opposite ends of the economic spectrum.

And, there’s the violence.  Oddly enough, most critics steered away from commenting on the brutality captured in the final 30 minutes of the film.  Have we as loyal film goers become so inured to meaningless violence (consider “Joker” and “Once Upon a Time … in Hollywood” for contemporary examples or any of Tarantino’s blood-spattered offerings) that it’s simply “OK” to illustrate personal, family, social or economic struggles by spraying blood across the camera lens?

The critic for Variety summed up her enthusiasm for the film by commenting  – “Parasite is a tick fat with the bitter blood of class rage.”  In this part of the world, we try to avoid ticks at all cost.

“Parasite” is rated R for violence and in wide release, playing on several screens in the tri-state area.