Fair warning. Pig is not a film for everyone. The “R” rating should be enough to steer families looking for an evening out with the kids to look elsewhere.

Which is not to say that Pig is a film that should be ignored, avoided or left to slip away, unnoticed. It is a captivating, thoroughly engaging film that has been widely applauded by national film sites and influential critics. Nicolas Cage, the often controversial winner of the 1995 Academy Award for his starring role in Leaving Las Vegas is at the zenith of his acting career. His portrayal of Robin Feld, a once-celebrated Portland, OR, chef who, upon the death of his wife 15 years earlier, has chosen to live the hermit’s life in the Oregon wilderness is stunning. His contacts are two – Amir (Alex Wolff) who appears once a week to collect the truffles that Feld collects with his pig.

When his world is, once again, turned upside down as he is assaulted and his beloved truffle hunting pig is stolen, Feld begins a journey that returns him to Portland, to his old haunts, to the people he knew and the life he had left behind. He is in search of his pig, and the exploration plays out like an adventure film filled with illegal fight clubs, stolen bicycles and the ultimate confrontation with Amir’s father, played with steely disdain by Adam Arkin. 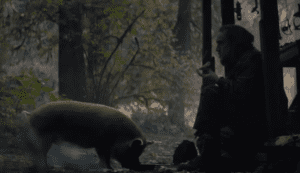 This is a film that draws the audience in from the first moments of searching through the lush forests in search of truffles and never allows the story arc to falter or the characters to lose focus. Writer/director Michael Samoski has crafted a truly engaging story about love and loss and the first tentative steps toward recovery. And, for his part, Cage has never been better. His lines are spare until he finally sinks back into his old world – the fine dining restaurants – where his disheveled appearance, the dried blood from his wounds and his taciturn manner combine to keep those around him off balance. It is a remarkably compelling strategy on the part of film auteur Samoski, and it cuminates in a moment of resolution that is not overplayed, but bitterly sweet.

So, take the kids to another film, soon. There are several PG films in the summer pipeline that should amuse and entertain. For an evening that will engage, challenge, illuminate and, ultimately provide great subjects for conversation, spend time with the Pig. The film runs only 93 minutes, and there is never a moment when the velocity of the storytelling bogs down. There should be little surprise if, when the Academy Award nominations are announced for this year’s offerings, the whimsical title Pig doesn’t appear on the list. 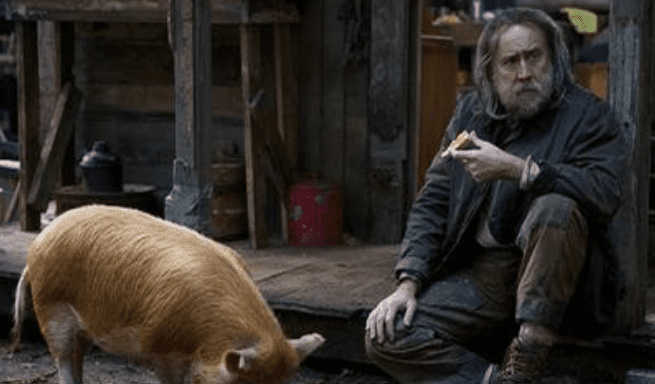