Episode IX of the trilogy of trilogies that is the “Star Wars” franchise has one important element to commend it.  It brings “the band back together.”  With the possible exceptions of Darth Vader (his crushed and melted helmet stands in).  Obi Wan Kenobi (actor Alec Guinness died in 2000) and Yoda. Director J.J Abrams has created a wrap-up film that struggles valiantly to tie up loose ends and end on a high note.

In many ways, Abrams succeeds, preserving the original George Lucas “vibe” of amazing visual effects, high stakes action, “good guy versus bad guy” dramatic tension and enough inserted comedic bits to keep the audience attentive.  Daisy Ridley as Rey leads the surviving Resistance fighters into the ultimate battle against Emperor Palpatine and the might of the Siths.  She manages to insert several lightsaber duels with her nemesis and, in fact, the love of her life, Kylo Ren played with his usual mastery by Adam Driver.

The production has announced budget of $275 Million, which will have been covered by the time Christmas Day becomes Boxing Day and the spilled popcorn is vacuumed from the thousands of theaters screening the epic. 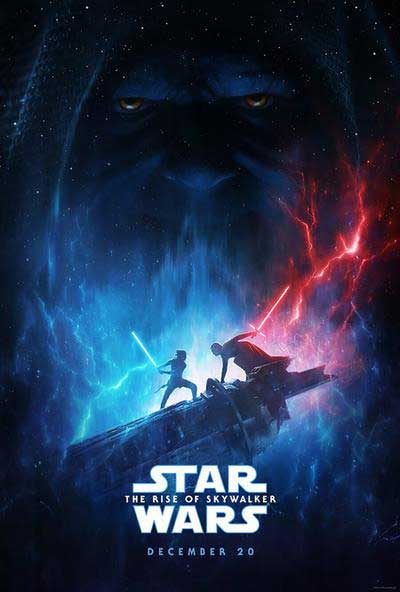 There was much preliminary hype given to the appearance of Carrie Fisher, whose untimely death in 2016 cast a shadow over the final two installments of the nine episode theatrical series.  Through excellent use of footage retrieved from out takes from “Star Wars – The Force Awakens,” J.J. Abrams’ earlier writer/director effort, Fisher takes a decidedly commanding role in “The Rise of Skywalker,” dying symbolically as the final battle begins.

Although Yoda was announced as being 900 years old, some of the other characters appearing in this final episode have aged in a very human way.  Harrison Ford reinvigorates his role as Han Solo just in time to counsel and encourage his son, Ben … who has morphed into the deadly Kylo Ren … to regain his human persona.  Mark Hamill does the same to Ridley’s Rey at the point in the story arc where she struggles most with her destiny and needs some strong encouragement … and a talisman … to soldier on.

John Williams’ music makes the soundtrack rich and the overwhelming visual effects created by Industrial Light and Magic, the company formed by Lucas to create effects for the first “Star Wars,” create a cohesive experience that should reassure the most ardent and critical fan.

“Star Wars – The Rise of Skywalker” may not be classic cinema in the way that the first film in the cycle was when it appeared in 1977.  That film became a worldwide phenomenon and fostered an entire industry.  This film offers a “coda” on the entire series and creates enough of an adrenaline rush to keep audiences coming back for more.

“Star Wars – The Rise of Skywalker” is rated PG-13 and is in worldwide release, playing at The Moviehouse in Millerton, NY, Bank Street Cinemas in New Milford, CT and Triplex Cinema in Great Barrington, MA.