This could be one of those moments when we celebrate the fine line between criticism and review.  There have been some self-important critics who have maligned “The Gentlemen,” Guy Ritchie’s latest action/intrigue/comedy offering for a variety of reasons, most of which seem to miss the point.

Matthew McConaughey stars in this British intrigue, stepping out of his Lincoln SUV commercials long enough to become Mickey Pearson, the kingpin of the marijuana trade in England.  McConaughey has become an actor who inhabits each role, but is always himself.  It’s a Jack Nicholson kind of vibe – no matter what the role, what the film, Jack is always Jack.  Matthew is always Matthew … and that’s a good thing.  It won him an OSCAR for “Dallas Buyer’s Club” and has served him sell.

As for the “vibe” of the film, it’s filled with crass language, sometimes deadly action, a somewhat preposterous premise that giant marijuana farms can be secreted beneath crumbling British manor house estates, and laughs.  Lots of laughs. 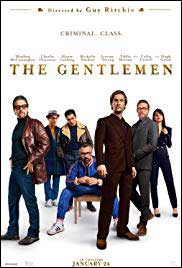 Three male stalwarts of British cinema give most enjoyable performances, making the twists and turns of the intricate plot almost believable.  Hugh Grant as the blackmailing private investigator Fletcher is delightfully seedy.  Colin Farrell as Coach is both charming and capable of explosive moments that bring explosive laughter.  Charlie Hunnam as Raymond, Mickey Pearson’s loyal and deadly aide-de-camp can be charming, observant, supportive and a successful mirror of his mentor.  It’s a great stew.

The appearance of Michelle Dockery, perhaps best known for her “Downton Abbey” character, Lady Mary Crawley, may live a life of opulent luxury provided by McConaughey’s Mickey, but she’s no lady … which is fully in keeping with this raucous adventure, because “The Gentlemen” aren’t gentlemen, either.

The “R” rating for “The Gentlemen” is well deserved for language, violence, drug content and sexual references, and this is not a film for those looking for a soothing bit of cinematic pablum.  If robust laughs, mind challenging twists and turns and bursts of action are attractive, then “The Gentlemen” is a good choice for an evening out at the movies.  Guy Ritchie has a long history of creating films that poke fun at social conventions, and his string continues with verve.  There are “shots” taken at the British tabloids, the aristocracy, social norms, cell phones and other conventions of contemporary society.  The audience discovers, early on in the proceedings, that laughing is a worthwhile release.

“The Gentlemen” is in wide release.