“The Irishman” is a 3 ½ hour Master Class in acting.  The portrayals of mob bosses, “wise guys,” “hit men,” long-suffering family members and befuddled government officials is mesmerizing. … so intoxicating that the audience barely seems to register the time that has elapsed since they sat down, rustled through their popcorn and began Frank Sheeran’s (Robert DeNiro) long journey from petty thief to mob hit man, confidant of Jimmy Hoffa (Al Pacino) and ultimate pawn of Philadelphia mob boss Russell Bufalino (Joe Pesci).

The narrative spans decades, intertwines the historic record of a turbulent time when the post-World War II ‘5o’s became the “Camelot” years of JFK, the disaster of the Bay of Pigs, his assassination and the years of Watergate.  Through it all, the evolution of Frank Sheeran’s story moves with deliberate speed and the characters, who are magically transformed from young men to old, bent and wrinkled shadows of their former selves, sustain a level of engagement that never loses it’s intensity.

The acting is superb and the direction, by legendary filmmaker Martin Scorsese, is so even and intense that the marathon length of the film is only a minor consideration. 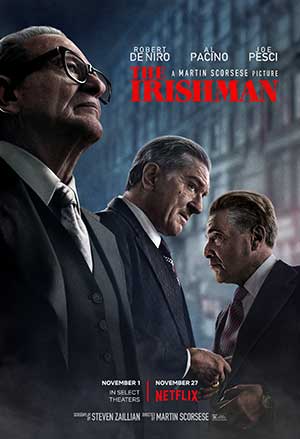 Much has been made over the reluctance of Netflix, the funding mechanism for a film that is rumored to have cost in excess of $140 Million, to allow the major cinema chains to show the film within their normal protected cycle.  As a result, “The Irishman” debuted on the streaming service at roughly the same time it appeared in independent theaters around the country.

Millions of viewers will settle onto the couch and become immersed in the film in the comforts of their own homes, but like many of the current batch of high-budget films, “The Irishman” should be seen on the big screen so that when a row of taxi cabs explodes or Jimmy Hoffa addresses a crowd of Teamsters or Frank Sheeran is honored at a banquet in front of hundreds of local dignitaries, the effect is fully experienced.

To appreciate the details of the precise character portrayal, the little flourishes that make each scene a gem, the meticulous way in which characters age  as the story unfolds all can ben viewed and re-viewed at home across a winter’s evening.  The original effort to initially see the film in a theater, surrounded by a live audience to experiences the complex mastery of “The Irishman” is well worth it.

As a side note, the full title of the film is “The Irishman … I Understand You Paint Houses,” which is a mob reference to the “wet work” of the hit man.  The film is the invitation for the uninitiated, those who live their lives inside the law, pay their taxes, drive their kids to soccer practice and occupy a welcome place in the community to see what life is like on the other side.  It is a mesmerizing view … one that can end with the final credits as the audience returns to their normal lives.

“The Irishman” is rated “R” for strong language and violence.  It is playing at The Moviehouse in Millerton and Spotlight Cinemas in Hudson, NY and on select screens in the region.