The film begins calmly enough. It’s a lovely autumn day and a group of vacationers are taking a guided tour on Lake George. A rogue wave. A series of painful funerals. “The Laundromat” has just begun to unveil what personal tragedy can look like … all in pursuit of the “almighty dollar.”

Steven Soderbergh is no stranger to brilliant political and social commentary. “Michael Calyton,” “Syriana” and “Erin Brockovich” are a few good examples.
As director of “The Laundromat,” he has accumulated an estimable cadre of “A-list” stars to wander the globe as he unravels the insidious corruption and duplicity of the very, very wealthy who rely on shell corporations and tax havens to hide their wealth.

At the center of the exceptional cast is Meryl Streep who, once again, proves that she can act any part, make any character charming and believable, and start a revolution with the simplest questions. Gary Oldman and Antonio Banderas are comically brilliant as Mossack and Fonseca, the Panamanian attorneys at the heart of what came to be known as the “Panama Papers” scandal that rocked the world, caused governments to collapse and demonstrated just how corrupt a financial system can become.
From the simple tragedy of a boating accident in Upstate New York to the center of power in China, the crushing wealth of Las Vegas, the lavish homes of Los Angeles, the back streets of Caribbean islands where tax laws are lenient and persons of questionable integrity find much to entertain them, the film is an amalgam of vignettes, all tied together in the Panamanian offices of Mossack and Fonseca. 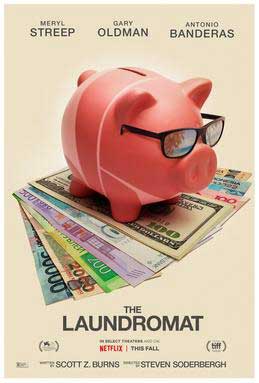 There are laughs, there are moments of cinematic tension, there are wonderful cameo appearances by such luminaries as Sharon Stone, David Schwimmer, Will Forte and a dozen other recognizable stars … and there are the rock solid performances of Streep, Oldman and Banderas.

“The :Laundromat” is not a blockbuster. There are no car chases, earthquakes that topple cities, visitors from outer space, stunts that could only be accomplished with layers of post-production digital effects. There is an effort to unwind the circuitous and seedy world of those who attempt to avoid tax laws, hide their money – much of it ill-gotten – and behave as if the rules of human decency don’t apply to them. It’s quite a ride.

“The Laundromat” is a well-crafted intellectual adventure played out on an international scale, and punctuated at the right moments by news clips from broadcast outlets around the world and a poignant lift from a speech by President Obama that acknowledges “the elephant in the room,” and calls out for enforcement of laws that protect the many rather than sheltering the few. Sadly, a brief on-screen statement reminds the audience that the most recent U.S. Tax Law did nothing to address the inequities.
Playing at The Moviehouse in Millerton, NY and in wide release, “The Laundromat” is being distributed by Netflix and after its theatrical run, will be available on the streaming service. It is rated “R” for language, some violence and suggestive material.