There was an awkward moment in the darkened theater as the last notes of “Hitch Hikin’” reverberated in Bruce Springsteen’s New Jersey barn as the opening salvo of his concert film/autobiographical exploration “Western Stars” started the journey through his newest album of the same name.

Several members of the attentive audience began to applaud … then caught themselves with a light nervous laugh.  This is a film, after all, and “The Boss” is not within earshot to hear the appreciative response to vintage Springsteen music and lyrics, the rich, sensuous blending of the 30 person orchestra, the razor sharp back-up band and the tightly meshed back-up singers, led by his wife and long-time band mate, Patti Scialfa.

“Western Stars” is, by Springsteen’s admission, the third piece of a trilogy that began with release of his autobiographical “Born to Run” and continued with “Springsteen on Broadway” which ran (with two extensions) for 236 performances.  The film is a brilliant completion of that cycle. Each song is sensitive, revealing look into the soul of Bruce Springsteen … and for many in the audience, a probing mirror. 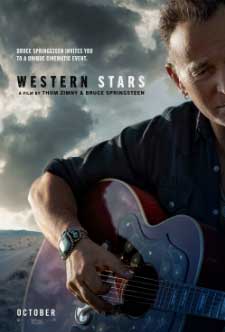 The film is co-directed by Springsteen and Thom Zimny, who won a 2019 EMMY Award for his direction of the broadcast production of the Broadway show.  It is a lush amalgam of fully nuanced coverage of the barn concert combined with charming archival footage and expansive aerial footage that celebrates the open, rugged Western terrain.

Springsteen performs every song on the new album, then adds an encore that puts an exclamation on the notion of hope and discovery that come with maturity (Bruce just turned 70). When he and Patti blaze through “Rhinestone Cowboy,” the audience knows that this very special hour and a half as come to an end, but the afterglow will remain.  Certainly, “Western Stars” will appear on one of the streaming services, but making the effort to experience it in a theater and being immersed in the full range of sound is not to be missed.

“Western Stars” is so tightly produced (each violin has its own microphone) and brilliantly edited (Zimny is credited for the edit) that it creates a new film genre and, in so doing, sets the bar impossibly high.

Those of a certain age may recall the first efforts to put visuals to music for a wider audience – the Scopitone “video jukeboxes” that were created in France in the early 50’s and became fixtures in bars across the country before MTV launched its channel in 1981 and made music videos an essential component of the music industry. Neil Sedaka, Bobby Vee and Procul Harum all benefited from their appearances on the Scopitone machines. It is widely held that The Beatles led the demise of the jukeboxes and ushered in a new musical era.

With that history deep in the past, the appearance of “Western Stars” may well signal the changing of the guard as visual “tone poems” bring the majesty of skilled film production together with simply outstanding music.  The fact that this effort has Springsteen music, lushly presented and beautifully timed allowed the audience to overcome their inhibitions at the closing credits and applaud the entire experience.

“Western Stars” is playing at Triplex Cinema in Great Barrington, MA and in wide release.