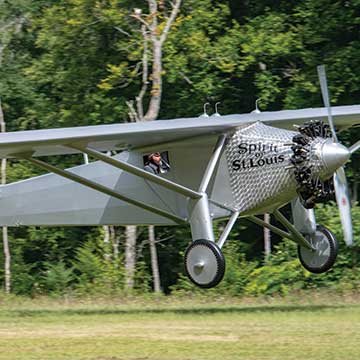 Every summer crowds flock to the active airfield in Rhinebeck, NY, to catch the spectacular weekend air shows and browse the museum’s extraordinary collection of vintage aircraft, which date back to 1900 to 1937.

The late Cole Palen was the pilot, aircraft preservationist, and founder of the Old Rhinebeck Aerodrome. The Pennsylvania native spent much of his childhood in Dutchess County on his family’s chicken farm in Red Oak Mills. As a young boy, he developed a passion for aviation. A fan of Charles Lindbergh, he devoted some of his leisure time to building model airplanes.

After high school, Palen was drafted into the United States Army and served in World War II. Upon returning home from his European tour, the aviation enthusiast enrolled in the Roosevelt Aviation School in Roosevelt Field, Long Island. After completing a one-year program, he simultaneously earned his pilot’s license and aircraft mechanic’s license.

As Roosevelt Field was preparing to shutter for the 1956 debut of the Roosevelt Field shopping mall, everything – from equipment to aircraft – had to be removed from the premises. One of the airplane hangars housed several aircraft from the World War I era. All of the aircraft were put up for auction.

After learning that the Smithsonian Institution acquired several aircraft, Palen bid his life savings for the remaining lot. After winning the bid, he had one month to remove the aircraft from Roosevelt Field. “Legend has it that he towed them up to Dutchess County one by one,” says Stew Sommerville, airshow and events manager at Old Rhinebeck Aerodrome.

Fueled solely by his keen interest in all things aviation, Palen initially had no intention of establishing a museum. He simply needed a place to house his new collection of vintage aircraft.

Evolution of the museum and airshows

“An abandoned farm in Red Hook was being offered at a very reasonable price because there was an unsolved murder on the property,” reveals Sommerville. After purchasing the land in the early 50s, Palen used his own two hands to hack the runway out. He used his expertise in mechanics to ready the planes for flight.

Once the planes were spotted soaring the Dutchess County skies, people started showing up at the airfield. It wasn’t long before Palen started hosting air shows as a means of entertainment. “He didn’t charge admission, but he placed a top-hat on the wing and accepted donations,” says Sommerville.

After witnessing the success of the initial air shows, Palen created a schedule. Shows were held on the last Sunday of the month. Sommerville mentions that interest in aviation began to escalate during the 1960s after cartoonist Charles Schulz unveiled his Snoopy and the Red Baron comic strip. Clad in a flying cap, goggles and scarf, the adventurous pup took to the skies atop his doghouse, which he envisioned as a soaring biplane.

In 1993, the Rhinebeck Aerodrome Museum was established as a 501 (c) (3) non-profit organization. Its mission is to continue Palen’s legacy in preserving, restoring, and flying the aircraft of the Pioneer, WWI, and Golden Ages of Aviation. Today the Old Rhinebeck Aerodrome boasts one of the finest collections of antique aircraft worldwide. One of the highlights is an original 1909 Bleriot XI – the oldest flying aircraft in the United States and the second oldest in the world.

Before Palen acquired the Bleriot XII, it was housed in a barn in New England. “Someone heard about it and told Palen where it was located, so Palen purchased it,” says Sommerville

The museum collection, which is open from May through October, includes 50 to 60 static planes, 14 to 15 aircraft, which fly in the airshows, and 20 antique automobiles and motorcycles. Nearly all the vintage vehicles are in working order.

“We have WWI-related ephemera, helmets, and goggles – everything related to the early days of aviation,” reveals Sommerville.

Palen was active with the museum until his passing in 1993. Throughout today, the staff and volunteers at Old Rhinebeck Aerodrome continue to support Palen’s initial vision.

The museum boasts three key groups. Its Pioneer aircraft hail from the period from 1903 to WWI. There’s also the aircraft from the Lindbergh era. These date back to the time when Charles Lindbergh completed his first solo flight across the Atlantic Ocean when he flew the Spirit of St. Louis from New York to Paris.

A reproduction of the Fokker Dr.1, which is also known as the Fokker Triplane, is another museum highlight. The Fokker Dr.1 gained notoriety during WWI. It was the aircraft that fighter pilot Manfred von Richthofen, aka the “Red Baron” – claimed his last 19 victories in. He also died in a Fokker Dr.1. “Of the 250 that were built, only a few of these planes survived. All of them were lost during the bombing of Europe during WWII,” says Sommerville.

Over the years, Palen utilized his mechanic skills to fix the aircraft of yesteryear. Upon his passing, he donated several of the original WWI aircraft that he restored to the National Museum of the US Air Force, the Canada Aviation and Space Museum, and the Smithsonian National Air and Space Museum.

The Old Rhinebeck Aerodrome continues to carry on Palen’s air shows. The Saturday History of Flight show highlights the Pioneer era and Golden Age of Aviation in the 20s and 30s. The Sunday show, which was created by Palen many years ago, is a WWI dog fight complete with a hero, heroine, villainous Black Baron, a bit of pyrotechnics, and a WWI tank.

“It’s all great fun. We’ve had thoughts about changing the show, but when we do something different, fans always let us know,” says Sommerville.

As Old Rhinebeck Aerodrome heads into its 62 season, its team is scurrying to bring back the heyday of the late 1970s to 1990. “Our demographics are aging and there are seismic shifts going on, so we are trying to build our attendance. We are doing what we must to attract younger audiences and cultivate the next generation of enthusiasts,” reveals Sommerville. A youth program provides kids with hands-on experience and education about the early days of aviation when the planes were made of wood and fabric.

The season for biplane rides kicks off June 20 and runs through October 18. The 15-minute flights travel around the Hudson Valley area. This season will unveil a new premium lighthouse and mansion tour. (Note: Due to uncertainty with the COVID-19 situation, please check the website for updates). •

To learn more about the Old Rhinebeck Aerodrome, you can call them at (845) 752-3200 or visit them online at www.oldrhinebeck.org.