McSpiritt, whose wife, Janet, teaches in the Webutuck school system, worked at Webutuck HS from the fall of 1987 until the summer of 1993 when he joined the staff at Connecticut’s Torrington High School in Litchfield County. One of the McSpiritt’s two children, Joseph, is a health and physical education teacher at Mount Everett High School in Sheffield, Massachusetts. 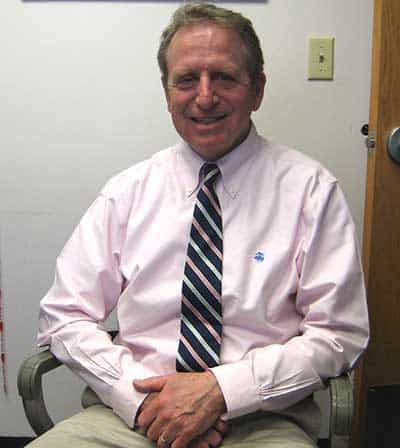 McSpiritt’s latest honor marks the third time he has been inducted into a sports hall of fame. He had previously been elected to the Torrington High School Hall of Fame in 2017, and was a member of the 1976 Verona High School (Verona, New Jersey) soccer team that was enshrined in that school’s Hall of Fame in 2004 for its accomplishments.

McSpiritt was a defenseman on the University of Connecticut men’s soccer team that won its first NCAA Division I championship under legendary head coach Joe Morrone in 1981. McSpiritt captained that team. At the end of the season, McSpiritt, along with teammate, Pedro DeBrito of Waterbury, were both voted “Co-Most Valuable Players” by their teammates. “I wasn’t the best player on the team, but to be a part of that championship was certainly the highlight of my playing career and something that brought me this latest recognition.”

McSpiritt said, “It was “cool” to be inducted into the Connecticut Soccer Hall of Fame and to have been part of that successful team and program. It’s nice to still have people come up to you and say they remember you from your playing days.”

He played a key role on those UConn teams that compiled a three-year record of 61-12-3, culminating in the national title. He was looked on so favorably by his teammates for his play and leadership that they voted him team captain his senior season. “I did believe I was a good leader, both on and off the field. It meant a lot for my teammates to think so much of me that they chose me captain.”

“The boys soccer team was competitive in our league going against schools from Pawling, Dover, Pine Plains, Millbrook, Haldane High School, and Spackenkill High School. We qualified for the Section I state tournament a couple of times as did the boys basketball team.”

One of the teams McSpiritt recalled fondly while at Webutuck was his first boys soccer team. “We were pretty good and we had some talented players. I also remember the boys basketball team beat Dover High School my first year as coach, which was another highlight.”

There were also some outstanding student-athletes that McSpiritt thought back on. “Todd MacNeil, Alex Duncan, Allen Lazarus, Steve Duncan, Brett Reimer, and the late Todd Waite were all very good soccer players.”

McSpiritt was selected as the New York State Section 1 Boys Soccer Coach of the Year in 1990. “It is always a surprise to be recognized for work that you love to do. I love the game of soccer and enjoyed sharing my knowledge of the game with the players. While at Webutuck, I enjoyed working with the students, staff and community that supported a strong school community–students who wanted to be competitive in their sports. I still run into Todd MacNeil, who works at Cranes in Canaan (Connecticut).”

McSpiritt played four years at UConn and graduated with a B.S. in physical education in 1982 and added a master’s degree in sport management in 1984. After leaving Storrs, he became an assistant men’s soccer coach at Bowling Green University in Ohio, where he also served as assistant director of a summer sports program until 1987.

Beyond his family and when it comes to sports there have been many highlights for McSpiritt. But none topped that momentous day when the Huskies’ soccer team brought home the National Championship from Palo Alto, California. UConn defeated the Alabama A&M Bulldogs at Stanford Stadium, 2-1. The 1,500 or so fans that were in the 60,000-seat stadium paled in comparison to the energy generated by the 7,000 standing room only crowd that jammed into the UConn soccer stadium for a quarterfinal match against Long Island University that sent the Huskies to the Final Four.

“The energy in the stadium at the LIU game was amazing,” said McSpiritt. “We beat them 3-0 and the stands emptied after the game and fans came onto the field with us. It was really something.” UConn went on to beat Eastern Illinois, 2-1, in the National Semifinals at Stanford Stadium to set up the championship game. “The championship game tops it all. It wasn’t a big crowd but I believe it was the first time the men’s soccer title game was on ESPN.”