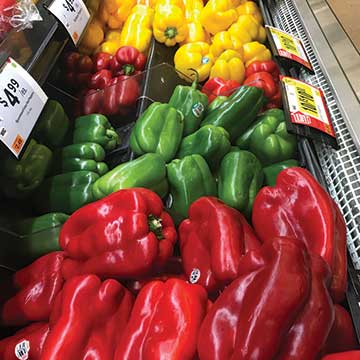 “Just go for it.” Those were the last thoughts I remember thinking before I rolled up and over a wooden ladder, and attempted to huck a 4-5’ drop on my mountain bike this past September. I’ve been mountain biking for over twenty years now with relatively few injuries, and although I usually draw the line at five foot jumps and drops, my bike handling skills are good enough to get me out of most jams. Not this time.

My front wheel dropped out from under me, and I fell down to the left and over my bars. Some part of my bike – I think it was the bars – hit me hard in the chest on the way down, leaving a yellowish bruise there and soreness that lasted for months. Worse still, when I finally came to rest in the dirt, my chin was dripping blood from a gash that would require five stitches to close, and eventually a beard that I’m still wearing to cover the scar.

Over the next month, I pretty much stopped riding. X-rays of my head, neck, and chest all came back negative (or positive, depending on how you look at it), but my chest ached from the impact, and my neck and back were a knotted mess of muscle. I probably should have sought out a physical therapist, but I couldn’t find the time, or rather, I didn’t make the time. Instead, I rested.

I’ve had a few sports-related injuries over the past five years or so, and since hitting my forties I’ve noticed that recovery takes longer and longer. A strained calf that might have healed in a week when I was twenty-five can take up to six weeks to return to full strength now. Gym work, yoga, and stretching all help to speed up the process, but I had to face facts: I wasn’t twenty-five any more.

Over the next month, I slowly recovered with plenty of rest, ibuprofen, and light stretching. Eventually, I bought a full-face helmet and returned to the trails to conquer my fears, and although I didn’t attempt the same drop, I was reasonably confident on other obstacles. In most ways, I was back to 100%, but my body still ached from the crash, now over a month earlier.

One day during my convalescence, a friend recommended watching the Netflix documentary, The Game Changers, about elite athletes who had taken up plant-based diets and seen major performance gains. His enthusiasm for it bordered on evangelism, such that I had to at least give it a look in the way that all of us take a passing interest in our friend’s podcast recommendations. I’d at least watch enough of it to hold up a conversation about it.

But as I watched, I found myself intrigued by the science. Former MMA fighter James Wilks narrates his own investigation into the world of plant-based diets and interviews a range of professional athletes who espouse the lifestyle. The film cites many studies, and touts Arnold Schwarzenegger, Strongman Patrick Baboumian, Formula One driver Lewis Hamilton, and endurance athlete Scott Jurek as beneficiaries of a plant-based approach. But despite a wealth of citations and testimonials, the film smacked of the kind of propaganda I was prone to ten years ago, when I was a vegetarian myself.

Back then, I was a much more idealistic and militant vegetarian, adopting it for ethical and high-minded reasons. And while I never proselytized, the mere act of seeking it out at restaurants and grocery stores was an advertisement for it. However, towards the end of one fateful backpacking trip on the Long Trail in Vermont, my mind locked onto the idea of a hamburger, and voilà, just like that, eleven years of vegetarianism slipped into the rear view mirror.

For the next decade, I ate everything from bison burgers in Goshen to caterpillars in China, but I also took on more and more responsibility at work … and a few more pounds around the waist.

With my injuries, I found myself willing to look past the possible propaganda and assess a plant-based diet on its own merits. “Just go for it,” I decided again. Over a period of weeks, I eliminated animal sources from my diet, replacing milk-based yogurt with cashew and coconut milk-based options, and after I used up the meat in my freezer, I stocked up on veggie burgers and plant-based proteins that supposedly replicated the taste and texture of meat.

Eventually I slow-cooked the last pork loin in my freezer, and for the next two weeks, I was vegan – something I had never achieved in my most dedicated days as a vegetarian.

The athletic benefits that were chronicled in The Game Changers were enticing, and as a cyclist, I was hoping to shed some weight to help my climbing. With each week, I dropped a few pounds, and soon I’d hit a ten-pound weight loss goal that I’d been trying to hit for years. I recalled this happening when I went vegetarian the first time, but this time around, I also noticed that the inflammation in my chest and neck had disappeared, and I was feeling better than I had since before the crash.

The wisdom that comes with age and experience

So why did I ever start eating meat in the first place, and what is different this time? For one thing, the market has changed dramatically. My first foray into vegetarianism began when I was still in high school, and my income and options were limited. While I wasn’t eating meat, I wasn’t always eating the most healthful foods.

Today’s widely-available organic produce offers nutrient-rich foods that contain substance and sustenance that keep hunger at bay. Furthermore, most grocery stores have plant-based alternatives that are not only more available but more appealing. While I won’t say that veggie sausage can compete with a nice Italian pork sausage in marinara sauce, it has gotten significantly better, and for my daily consumption, that suits me just fine.

But therein lies another difference: I’m not so vigilant about avoiding meat this time around, and I’m willing to bend the rules frequently enough that I would have to call my diet plant-based, not vegetarian. Travel taught me that there are times when you will miss out on an experience if you don’t bend the rules for a good Argentine steak, and experience has taught me that I can’t do without ice cream and an occasional Italian sandwich.

It’s been about a month and a half now, so the experiment is still young, but so far I’ve been able to sustain the weight loss, and I don’t have an overwhelming desire to go back to a protein-heavy diet. Moderation and a certain amount of discipline help keep me on track, and the benefits to my health and overall fitness are worth the sacrifice I’ve made for most meals.

Shifting to a plant-based diet is a game changer for weight loss, athletic performance, health, and the environment, but a game changer doesn’t have to be so dramatic. Changing diet should be an evolution achieved one meal at a time, one ingredient at a time, and giving yourself permission to take it slow will also make it permanent, and that’s the only way to change your game. •