Live theatre is back at the venerable Sharon Playhouse (Sharon, CT) where their full-blown production of Guys and Dolls is in place through August 14th.  Director/Choreographer Justin Boccitto, who is also serving as “Interim Artistic Director,” made the creative decision to have all of the dancing be tap, and the result is quite amazing.  This production marks the return of fully staged productions to the theatre after the pandemic pushed events onto an outdoor platform that lent itself to concerts, not plays requiring sets, costumes, precise lighting and staging.

Headlining the cast of this lively revival of the Frank Loesser, Jo Swerling and Abe Burrows classic adaptation of two Damon Runyon short stories are four Broadway actors who charm the audience from start to finish.  Boccitto has clearly given them license to explore and enjoy their parts, and in so doing, given the audience much to applaud about, throughout.

The mash-up of Runyon stories unfolds in New York where Nathan Detroit, played beautifully by Robert Anthony Jones, is struggling to find a venue for his floating crap game while keeping his fiancé of 14 years, Miss Adelaide (Lauralyn McClelland) amused and at bay.  McClelland has a stage presence that is magnetic with a voice to match while Jones plays Nathan with just enough of an homage to Nathan Lane (who appeared in one of the many Guys and Dolls Broadway revivals) to keep the audience laughing at his every line.  Comedy requires excellent timing.  Musical comedy adds a degree of difficulty that is immersive.  McClelland, Jones and the other leads deliver on every level.

The second love story brings noted gambler Sky Masterson (played with both brass and empathy by C.K. Edwards) to meet his match in Sgt. Sarah Brown of the Save-a-Soul Mission, brought to life by Amanda Lea LaVergne.  Their characters are polar opposites on a collision course, but after a wild wager – Sky promises to bring a dozen sinners to a revival meeting at the mission if Sarah will fly down to Havana for a few hour dinner – they fall in love.  Getting from the fall to the wedding is a different matter, and just as Nathan Detroit and Miss Adelaide toss and turn on the way to the altar, Sky and Sarah find the journey most challenging.

There are many reasons to find a seat in Sharon Playhouse’s Main Stage for Guys and Dolls.  Not the least of those reasons includes the precise musical work of the show orchestra under the able direction of Jacob Carll.  The 8 piece group is tight, balanced and creates just the right platform for the vocalists.  Throughout the play the exact timing of a move, a look and, of course, the precision of solid tap dancing makes the orchestra most worthy of the applause generated during the curtain call.

For those who have grown up in the age of musical theatre, there are several songs that are part of Guys and Dolls that immediately evoke pleasant memories.  “Luck Be a Lady,” “A Bushel and a Peck,” “Sit Down, You’re Rockin’ the Boat,” and the comedic gem “The Oldest Established” which celebrates Nathan Detroit’s floating crap game are classics.  One moment to anticipate in this presentation of the musical is the gentle “More I Cannot Wish You” which is sung by Arvide Abernathy (Payton Turpin) to Sarah Brown as she struggles with her new-found love for Sky Masterson.  Turpin is a theatre devotee, but not a professional.  He’s a physician who has appeared on the Sharon Playhouse stage before.  His presence on stage is, just at the right moment, calming.  He’s got a great drum-side manner.

Two more plays fill out the 2022 Sharon Playhouse schedule. Following Guys and Dolls,  Shear Madness runs from August 27th to September 11th and A Raisin in the Sun closes out the offerings from October 7th to the 16th.  Tickets are available for all three shows on the theatre website (www.sharonplayhouse.org) or by calling the box office at 860-364-7469. 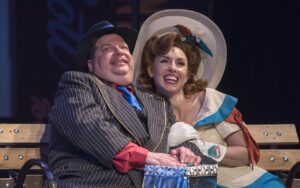