This is the month of Halloween and thinking of scary things – even in real estate. Maybe watching Lovecraft on HBO made me wonder what real estate agents and sellers have to reveal about “unfortunate” circumstances that have occurred in a house. Is it haunted? Was there an ax murder? Did someone die from a lethal disease like Ebola or commit suicide? As it turns out the legal answer is surprising and slightly different in every state. Buyers should know to ask and find out for themselves. Sellers should be careful about what they say.

A 2018 university study discovered that 57.7 percent of the US population believes that places can be haunted by spirits. Ghost Hunters is now one of five paranormal shows on A&E and the Travel Channel offers Ghost Nation. But how does a ghost, murder, or death in a home affect real estate values? Research studies suggest that it can take 50% more time to sell a house where a grisly death has occurred at a 2.4% lower price than comparable homes. One California appraiser estimated that a well-publicized murder could reduce the price of a property by 15% to 25%. Famously the house where Sharon Tate was slain by the Manson family was torn down by its new owner in 1994, “We went to great pains to get rid of everything.” In its place is a mansion with a different address. What does a seller and the property’s listing real estate agent need to reveal about what is referred to as a “stigmatized” property?

Did you ask about the ghost?

Experienced real estate agents often have a feel for old houses and ghosts, which might be more reliable than bringing in ghost busters. One described a very recent experience with an unexplained emptying of a sink cabinet during a walk-through in a vacant house. Another noticed out of the corner of her eye a fleeting image of the deceased former owner. Thomas McGowan, an Elyse Harney Real Estate agent with 22 years of experience buying and selling old houses, related his own experience buying the Pettibone House in Norfolk, CT. Built in 1802, McGowan was instantly drawn to the three-family home. One of the renters tried to scare him off the purchase by telling him about the ghost on the third floor. When his mother-in-law from Iowa came to inspect the house she observed an old woman in the window on the third floor. “Supernatural was not part of her rule book,” according to McGowan.

Later Tom and his wife Celia purchased an inn in Winsted, CT, with a moaning nurse, which drifted down the stairs and they delighted in giving haunted tours. Eventually the McGowans moved into the second floor of the Pettibone House. Every night they heard footsteps and a dragging sound above them. They remembered Celia’s mother telling them the story about the woman at the window. Tom went to the third floor bedroom to have a sit-down with the spirit. The room seemed cold, but Tom calmly told the ghost, “I don’t know who you are but you are welcome to stay here. Just please don’t scare us.” After a few nights the noises stopped. Some time after, the librarian asked if a story could be done about his haunted house for a local news article. “Who knows about this?” McGowan asked. “Oh everybody in Norfolk knows that the Pettibone House is haunted.”

Generally speaking, real estate laws in each state require sellers to disclose material facts about a house such as age of the roof, mold, square footage, number of bedrooms, taxes, etc. Most do not consider the seller’s reasons for selling – paranormal occurrences, a notorious history, deaths, or suicides – material, but the disclosure specifics vary from state to state and are evolving.

Let’s start with New York State. In 1995 the New York legislature amended the real estate laws to exempt brokers from any duty to disclose that the owners or occupant of a property had any transmissible disease, including AIDS, or that the property was the site of a felony like a murder or suicide or death by accident or natural causes. This means that in New York a buyer can’t sue a seller or broker for not telling them about disease or murders, although ghosts are not specifically mentioned. BUT the buyer may make a written inquiry and the seller can decide whether to respond or not. A seller cannot lie but is not forced to disclose any information.

Interestingly 1995, when this legislation was passed, was the year of peak deaths from HIV/AIDS in New York. The law states, “AIDS has been determined by medical evidence to be highly unlikely to be transmitted through occupancy of a dwelling place.” One wonders if there will be COVID legislation.

A famous New York court case does touch on the supernatural – the Ghostbusters ruling of 1991. The New York Supreme Court Appellate Division ruled to rescind the sale of a house because the owner had reported the existence of ghosts in a Reader’s Digest article and talked to the local press about poltergeists. No one had revealed the haunting to the ignorant buyer from New York City who was unaware of the home’s reputation when he signed the contract and put down a deposit.  Subsequent to the case, the Victorian with a view of the Hudson river was sold to a filmmaker, a singer-songwriter, and a musician, none of whom reported seeing any ghosts.

“Stigmatized” properties in Massachusetts and Connecticut

Massachusetts is filled with haunted houses and its real estate disclosure law Chapter 93A, Section 108 goes into detail about “stigmatized” properties. Unlike New York, Massachusetts’s law specifically refers to alleged parapsychological or supernatural phenomenon. Unless the purchaser specifically asks, “the fact or suspicion that real property may be or is psychologically impacted shall not be deemed to be a material fact required to be disclosed in a real estate transaction.” There is no duty for the broker to either investigate or disclose murders, suicides, ghosts, or other potential stigmas. If the consumer does ask however, the real estate representative must answer the question truthfully.

Separately in 1998, legislation passed to ensure that the privacy rights of persons with HIV and the families of victims of suicide and violent crime are respected. In simplest terms, the law states that questions regarding the HIV status of any former or current occupant of a residential dwelling should not be answered by the real estate licensee, even if the answer is that the individual in question does not have AIDS or the HIV virus. The National Association of Realtors recommends that real estate agents give the following response. “It is the policy of our firm not to answer inquiries of this nature one way or the other since the firm feels that this information is not material to the transaction. In addition, any type of response by me or other agents of our firm may be a violation of the federal fair housing laws. If you believe that this information is relevant to your decision to buy the property, you must pursue this investigation on your own.”

The current law in Connecticut is pretty straightforward. No disclosure is required of any non-material fact and neither owner nor agent can be sued for failure to disclose. BUT if a bona fide buyer asks the owner/agent in writing whether the property has been the site of a homicide, felony, or suicide the owner must either respond truthfully consistent with applicable laws of privacy or refuse to reply in writing. The buyer may draw their own conclusion.

Unlike California, which has expansive real estate disclosure rules extending to the whole neighborhood, in our Tri-state region it is the sole responsibility of the buyer to investigate the presence of dangerous neighbors, sex offenders/felons living or working in the vicinity of the residence or the history of the house. Prospective homebuyers should, at their own discretion, check with the local police department, consult the online sex offenders list, and generally Google the address and talk to the neighbors.

Real estate professionals are specifically prevented from looking into any of this as it is deemed a “transient” issue, but nothing prevents a potential buyer from knocking on doors and introducing themselves. Googling the address is also a good idea. Has the house ever been the location for a TV show? Do fans show up on the lawn? Is it famous for any other reason? One former tenant of the Hitchcock house in Millbrook, NY, said that the odd people who showed up looking for Timothy Leary of LSD fame were much scarier than the ghost of the little girl who appeared in the mirror at the bottom of the stairs. TV show Breaking Bad fans still track down the location of Walter White’s house in Albuquerque and imitate the episode where White throws a whole pizza on the garage roof. In 2017 the owner was forced to put up a fence.

What to do about ghosts?

With quarantine and so many people working from home, reports of ghosts have reportedly quadrupled. In these stressful times some homeowners and tenants cleanse their house with sage and herbs to celebrate their new space, or clear any negative energy. Check the internet for sage cleansing kits or ask friends to refer you to a spiritual healer. Or perhaps, like Tom McGowan, you could just have a chat with the ghost. If you are thinking of selling it might be best to be silent about the ghosts. 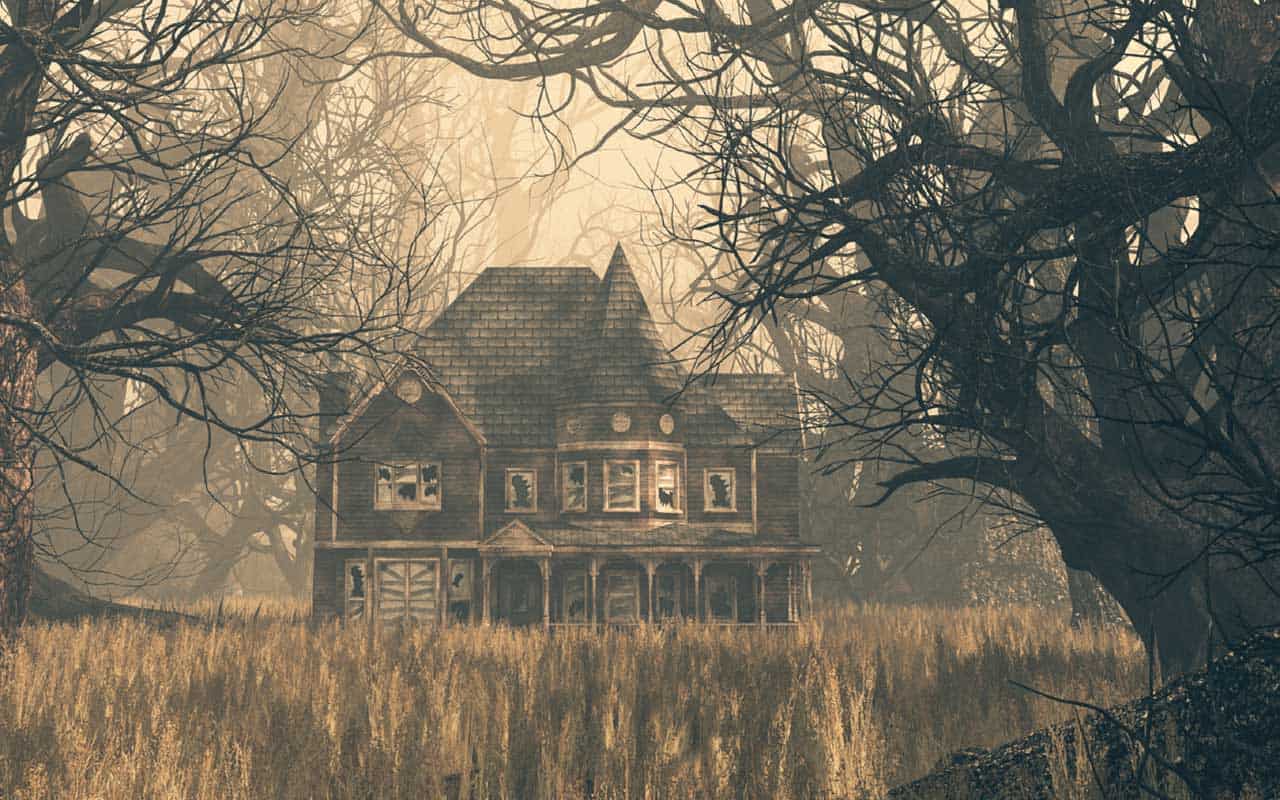 Christine Bates is a registered real estate agent in New York and Connecticut with William Pitt Sotheby’s and has written monthly for Main Street Magazine since it’s first issue. She has never seen a ghost but has been asked about them.