From Hillsdale’s earliest days, farming was a major occupation, although not an easy one to pursue. The rocky, thin soil and the hilly contours of the land made Hillsdale a less-than-perfect spot to grow crops. In fact, the steep population decline Hillsdale experienced in the latter years of the 19th century and early 20th century was in some part due to soil erosion. Heeding the words of Horace Greeley, young men and their families pulled up stakes and “went west” to the more fertile fields of Pennsylvania, Ohio and beyond. During that time, there were few newcomers moving in to stabilize the population. Hillsdale’s population — which had been at an all-time high of 4,700 in 1800 — hit rock bottom in 1930, when the Federal census recorded only 968 residents.

Many farmers who did stay turned to dairying, for which our hills and dales are much better suited. Butter production became a major force in the town’s economic development, all the more so when the railroad came through in 1852. Prior to that, dairying had been mainly a local business, with each dairy serving a radius of only a few miles due to the perishable nature of milk. With the arrival of refrigerated rail cars in the late 1860s, Hillsdale’s dairymen could serve markets as far south as New York City. Fresh milk replaced butter as the predominant dairy product as production grew substantially through the 1880s and 1890s.

In his 1883 “History of Hillsdale,” Capt. John Collin notes that a variety of mills operated along the Green River and Roeliff Jansen Kill in the early 19th century. Collin’s grandfather, also John, was born in Milford, CT and relocated to Hillsdale from Dutchess County probably in the years immediately following the Revolution. He is believed to have erected one of the earliest mills in Hillsdale in 1788 when he built a dam on a small Roeliff Jansen tributary near Route 23 (then known as the Old Sheffield Rd.) in East Hillsdale. Collin bought a second mill site in 1791 from Robert Van Rensselaer, upstream from the first on what is today Collins Street. There he constructed saw and gristmills, and what became the Collin homestead. A fulling mill was already operating on the site. 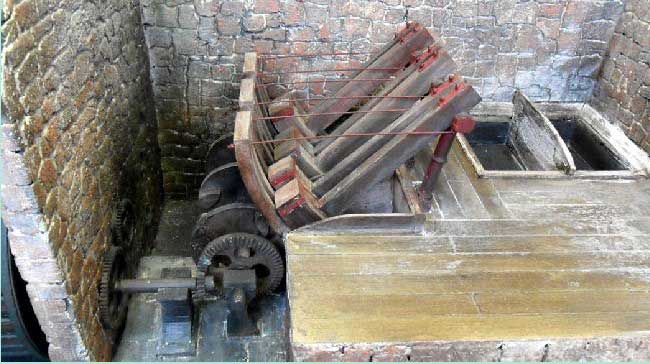 Fulling mills were used in the production of wool. Hand-sheared wool would be brought to the mill, where it was soaked in water and fed through a water-powered hammering device that cleaned the wool and made it thicker, or “fuller.” (Incidentally, this process originated in Europe, where the wool was soaked in a tub of animal urine, which dissolved the lanolin to which the dirt and soil adhered. Boys would then jump in and stomp on the wool to clean and full it. This method was eventually abandoned after mechanical advances, and presumably because it was disgusting and the pay was piss-poor.) The fulling mills also carded wool, at first by hand with spiked paddles (think of a pair of oversized dog combs) and then by the use of a carding machine. Carding was like combing; it straightened the fibers and further cleaned them. Once processed, the wool would be spun into yarn and used for myriad purposes. A worker in a fulling mill was referred to as a “fuller,” the origin of that surname.