We recently discovered that Hillsdale shopkeeper Matthew White has assembled one of the most complete collections of late 19th and early 20th century Hillsdale postcards. It gave us the idea for this blog post. And, as often happens, researching the topic led us to explore the history of a humble item that turns out to be richer than we could have imagined.

A word about postcards. The study and collection of postcards is called “deltiology,” and it turns out that, worldwide, collecting postcards is the third-largest collecting hobby after stamp collecting and coin/banknote collecting. Deltiology associations started forming at the end of the 19th century when postcards began to be mass produced. Most deltiologists agree that the concept of the postcard originated at the Austro-German Postal Conference of 1865, although the French will tell you they came up with the idea in 1777. The British have their own claim (1843).

We won’t belabor the full history of the postcard here, other than to direct you to summaries that can be found on the Smithsonian website, the American Association of Philatelic Exhibitors website, and Google Arts & Culture, among many others. Matt White’s collection contains excellent examples from each of the major “periods” of postcard types and styles: the “Pioneer Period” (1869-1898), the”Undivided Back Period,” the “Divided Back Period” (1907-1915), the “White Border Period (1915-1930), the “Linen Period” (1930-1940), and the “Chrome (Photochrome) Period” (1939-present). We also took advantage of the extensive library of postcards available on the Hillsdale town website to round out this post.

Congress passed an act in 1861 allowing privately printed cards weighing one ounce or under to be sent in the mail for postage of one cent, and in 1872 approved government production of postal cards.

The low postage fee was a draw, but because no messages were allowed on the address side, postcard publishers and the public pressured Congress to allow privately produced postcards with handwritten messages to be mailed at the same one-cent rate as government postal cards. Visitors at tourist attractions, as well as immigrants, were anxious to impress their friends and family with their travels, but were reluctant to pay this extra postage to mail a card that already cost a penny or two to purchase. The groundswell of political pressure forced Congress to act and the passage of the Private Mailing Card Act of 1898 allowed the privately printed cards to be mailed first class for one cent.

As a cheap way to correspond about ordinary things, such as confirming an appointment, postcards were sometimes referred to as “the poor man’s telephone.” The period from about 1898 to the beginning of World War I is referred to as the “Gold Age” of postcards. The majority were printed in Europe, on top quality presses, with high quality paper and expensive, brightly colored inks, and exported to the US for sale. The postcard transitioned from a simple souvenir of a vacation trip to a collecting fad of almost manic proportions, rivaling stamp collecting. Postcards were found everywhere: newsstands, drugstores, cutout cards in Sunday newspapers supplements, and as offers on the side of cereal boxes.

But World War I made the printing presses of Austria and Germany unavailable to U.S. companies, and postcards had to be printed in the U.S., where paper, inks and printing presses were inferior. The quality and beauty of postcards changed immediately. Coupled with this, other factors, such as high tariffs on imported postcards and changing methods of communication, such as the telephone, brought about the end of the Golden Age.

Nevertheless, towns that had printing or publishing businesses – a newspaper, for example – were often lucky to have their history documented in postcards, and Hillsdale was one such town. Here are some postcards that give a sense of Hillsdale’s past. Some have illustrated previous Historians of Hillsdale posts but some are “new.” Let’s start fittingly with the structure that today is Matt’s HGS Home Chef. 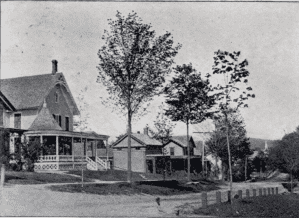 Postcards can also provide a “progress report.”  Here are two cards showing the Roeliff Jansen Central School before and after landscaping.  We wrote about the school in this post. 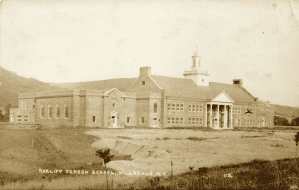 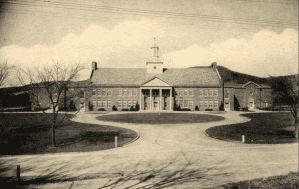 Look at this card showing the path of the Harlem Valley Highway (Rt. 22) in North Hillsdale. Does it look familiar? It’s remarkable how little that vista has changed over the years. 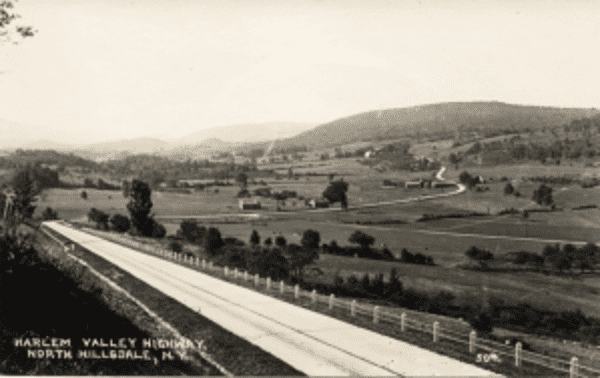 This card showing the east side of Anthony Street has a nice view of the post office (the one-story building furthest left) before it was renovated. (We wrote about the possible origin of the of Anthony street in this post.) 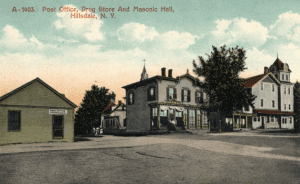 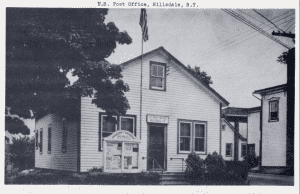 The East Gate Tollhouse was featured on a number of postcards, and here are two examples. When the tolls on the Columbia Turnpike were eliminated in 1907, the tollhouse became a private residence. (Read about it here.). 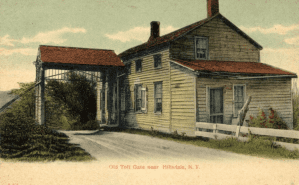 Here we have a postcard showing the home of George Bullock on Pill Hill Rd, just off Route 22. Or is it the home of Ed Herrington?  It was both.  George Bullock built “Edgewood” around 1880. He was co-owner of Bullock and Herrington, the forerunner of today’s Ed Herrington, Inc.  Mr. Herrington acquired the home from Mr. Bullock (perhaps after George’s death in 1909) and lived in it for several years. Eventually it became the home of the Rip Van Winkle Clinic. (Read more here.) 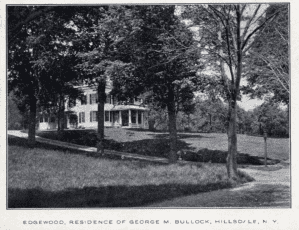 This is a card showing Park Square and Johnnie Quick’s news stand and ice cream shop. For many years, it was the Village Square luncheonette until it was remodeled to become the building that today houses Passaflora. (There’s more to read here.) 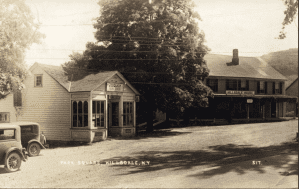 This dilapidated home deserved a postcard because it was the birthplace of John Bunyan Bristol, a noted Hudson River School artist.  (Here’s our post about it.) The home also turned out to be an old Dutch/Palatine dwelling built in 1840 and probably the oldest house in Hillsdale. You can read about that discovery here. 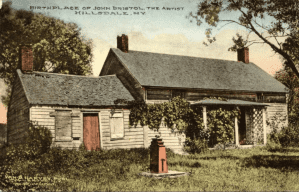 Meanwhile, the Elmwood Inn, located in one of the oldest houses in Hillsdale, was sold to a succession of restaurateurs starting in 1968.  Today it’s the location of C. Herrington Home + Design.  (More about this fascinating house in this post.) 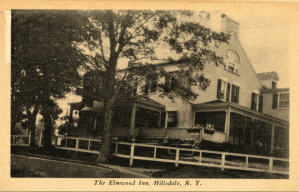 The Mount Washington House built by Levi Zeh in 1801. It attracted a classy clientele including artist John Bristol who, after gaining fame and fortune in New York City and beyond, continued to summer at the “Mount.” 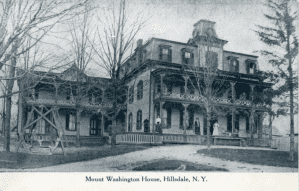 Part of the fun of old postcards is reading the messages on the back. Usually postcards with written messages are of lower value than like-new versions, but these messages tell so much about the people who lived in Hillsdale long ago.

Here’s an unsigned 1940 message, addressed  to “Flossie” in Hartford, CT:

Am now in Hillsdale NY State. Hudson only a few miles from here. Next week will go to Hinsdale Mass to see ___ and find out if she has considered my last year’s proposition.”

What could the proposition have been?  And why did the author wait a year for an answer?   Fascinating.

Here’s another.  We can’t make out the year, but from the rounded edges on the date stamp and the fact that the card was printed in Berlin, we’d place it in the late 1880’s:

Dear Marion: Expect to be home on flyer. Am feeling fine, but oh as large as a pig!  Love to all X Lillian

This 1909 message, from a postcard with a view of Hillsdale’s Main St., seems to express displeasure with the local weather:

That air was too bracing.  Perhaps it will not be so strong another time.

This 1915 correspondent was quite declarative:

Do not forget that suit of mine you borrowed! And I would not advise you to count much on using it while you are here!

Or this 1907 postcard from the “Undivided Back” Period, labeled “View Near Hillsdale, N.Y.”:

An artificial pond for the milk stations. Received your card was glad to know you were alive.

Does anyone know where this artificial pond was?

The message on this 1914 image of the Baptist Church in North Hillsdale (an early example of the “White Border Period” revealed a secret about the building we never knew:

Dear Blanch I wonder if you have forgotten the promise we made five years ago today.  We were some kinds in those days.  Does this picture look natural to you? You know they have made it over into a dancing hall.  I have not been to any dances there yet but think I will go Fri. night. Let me hear from you. Lovingly, Hazel Johnson

Today the former Baptist Church is in private hands.

When we asked Matt White what led him to his love of collecting postcards, he said, “No matter where we’ve lived we always collected ephemera of the place, and that was true when we moved to Hillsdale some fifteen years ago. We were surprised at the amount of materials produced, and so the collection still grows. Hillsdale has been a much-admired place for centuries, and of course those of us lucky enough to live here know why. These historic postcards are evidence that Hillsdale has always been a little slice of heaven.”