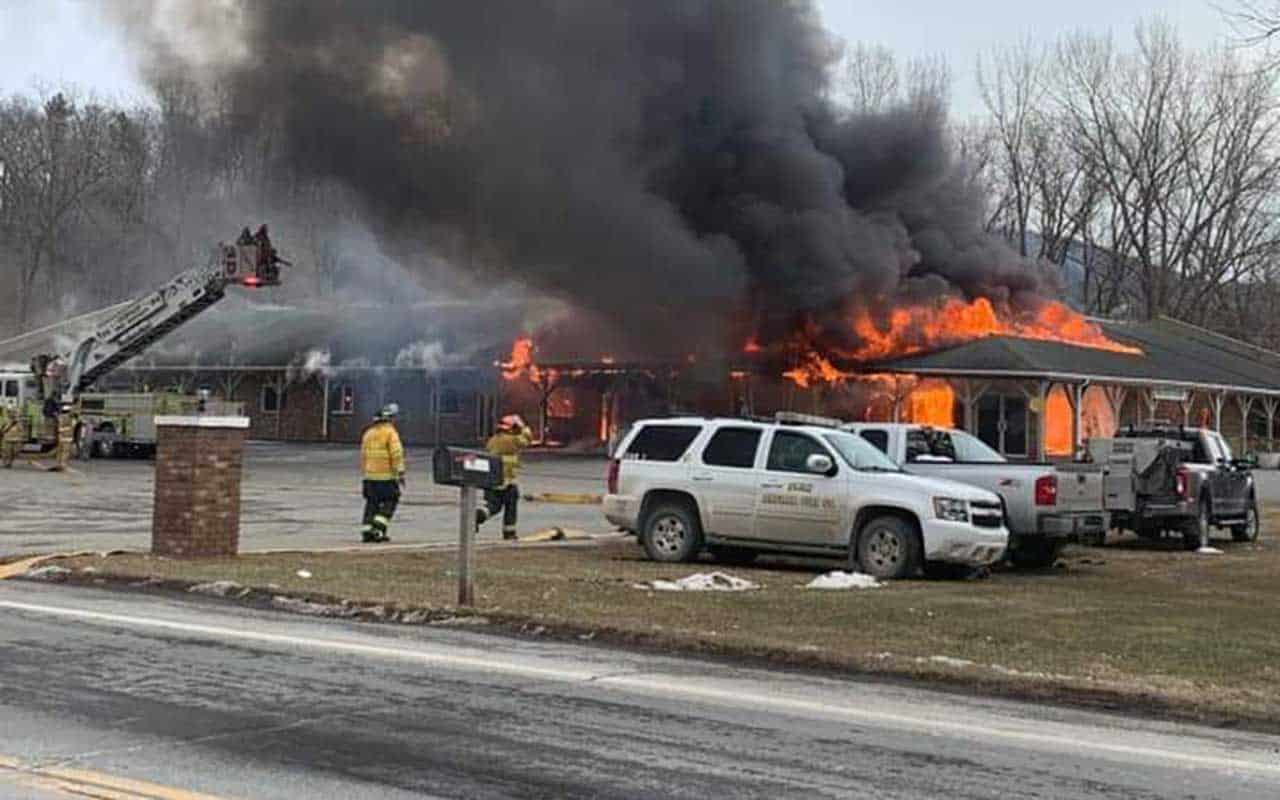 What began as an early afternoon fire alarm from the Hillsdale, NY Fire Company became an outpouring of social media shock for members of the Hillsdale community and beyond as a majority of the plaza that holds the Four Brothers restaurant tragically went up in flames on Sunday afternoon. Residents and neighbors began posting photos of the blaze as it progressed from the west side of the plaza and soon completely engulfed the space occupied by Hillsdale Healthcare, “I worked as an office manager at Hillsdale Healthcare ten years ago and have remained close to provider Elizabeth Bledsoe as a friend and patient ever since,” says Hillsdale resident Jen Wakamatsu of Nurse Practitioner Elizabeth Bledsoe who heads up Hillsdale Healthcare, “She offers in-depth, whole patient care for the community and that’s a rare in any place, much less in a small town like [Hillsdale]. I can’t imagine how difficult this must be, I am heartbroken for her and all of her patients.”

At approximately 2:15pm Sunday afternoon, Columbia County 9-1-1 dispatchers reported several calls from residents who reported smoke coming from the roof of the Coldwell Banker Prime office at 2828 Route 23. The Hillsdale Fire Company as well as the Community Rescue Squad were dispatched to the scene shortly thereafter where they observed the structure fire and quickly requested further aid. Volunteers and firefighters from Columbia, Dutchess and Berkshire Counties were involved in providing aid for those fighting the blaze. The fire quickly engulfed the aforementioned Hillsdale Healthcare office as well as a vacant space, damages to the Coldwell Banker office were also reported. Thankfully, firefighting efforts managed to stop the fire before it reached Four Brothers Pizza Inn which had been immediately evacuated. Currently the cause of the fire is under investigation and there have been no reports of injuries. The Columbia County Sheriff’s Office closed traffic on Route 23 in Hillsdale between Route 22 and Old Town Road. “I know I speak for the entire community when I say how proud we are of the astonishing collaboration and teamwork of our local fire departments and first-responders,” says Hillsdale Town Supervisor Peter Cipkowski, “They put so much at risk at a moment’s notice. Quite remarkably, they bravely stopped an aggressive fire from taking out both Coldwell Bankers and Four Brothers.”