No disrespect to mountain laurel as the Connecticut State shrub, but perhaps it’s time to pass the torch to the humble, medicinal, and magical witch hazel.

This wonder shrub finds a suitable home in the woodlands of the northeast part of the country. While mostly present on the eastern side of Connecticut, you can find a healthy dose of it in the woods of Great Mountain Forest (GMF), whose over 6,200 acres straddle Falls Village and Norfolk.

How to spot a witch hazel

Flanking the Chattleton Road, on the western side of the forest, grows GMF witch hazel (Hamamelis virginiana), one of its more storied forest products. You can identify the witch hazel shrub by its grey meandering branches and the surprising and stunning autumn bloom of its yellow tendrilled flowers – think of forsythia on a bad hair day.

These flowers and the shrub’s seed pods appear after the leaves have fallen, making witch hazel all the more mysterious and dramatic. The seeds lie on the forest floor maturing and biding their time, and then, due to their two-seed pod, they spring from their dried casing and travel upwards of 20 feet. This distance from the mother shrub enhances their ability to survive and thrive.

Witch hazel is known for its medicinal qualities that Native peoples harnessed for their use. These included easing sore muscles, treating wounds, and brewing a medicinal tea. The shrub contains flavonoids and tannins that are astringent and help stop bleeding.

Its name has less to do with black magic than its branches’ flexibility. The word “witch” derives its meaning from Middle English for wych or wyche, meaning pliant or flexible. It is thought that Mohegans showed English settlers how to use its Y-shaped branches for “dowsing,” which is the ability to find water underground, also called water witching.

Since 2002, GMF has harvested its annually certified organic witch hazel. The harvesting process begins in late autumn and early winter after the leaves have fallen. GMF contracts with second-generation witch hazel harvester Eugene Buyak to chop the shrub the old fashioned way – with an ax.

Buyak then hauls the branches from the forest in his adapted doodlebug vehicle. As the doodlebug drags a load of witch hazel out of the woods, it spreads the newly fallen acorns. This acorn dispersal aids in the regeneration of oak trees in the area.

Rotating around the prolific witch hazel stands, which need a minimum of ten years to regrow, Buyak harvests over a hundred tons of witch hazel each season. He chips the branches and stems in a specialized chipper and sells them to American Distilling, owner of Dickinson Brands.

American Distilling’s T.N. Dickinson’s and Dickinson’s Original labels have been familiar sights in medicine cabinets since the late 1800s. According to its website, American Distilling is the world’s largest witch hazel supplier in the world. Not only do they distill it, but they also perform research into the plant’s properties and benefits and have an in-house team of botanical extraction and application scientists.

Three times is a charm

The cornerstone of American Distilling’s process for turning the chipped stems of witch hazel into the clear astringent liquid is triple filtration. The plant extracts first enter a filtration process that analyzes it for clarity, color, odor, pH, alcohol percentage, and microbial contamination. The second filtration further tests the product for integrity and safety. It is filtered one more time before being transferred to a storage container for shipping.

Global reach of a local product

The spindly branches of GMF’s witch hazel shrub have a global reach. The distilled extracts from the shrub cuttings sourced from the forest are a key ingredient in products that beautify consumers worldwide. It works magic in soothing irritations and inflammation from your top to well, literally, your bottom.

Next time you reach for a cotton ball and a bottle of witch hazel, you can clarify your skin and conscience with this homegrown, organic, and sustainably-produced liquid magic. • 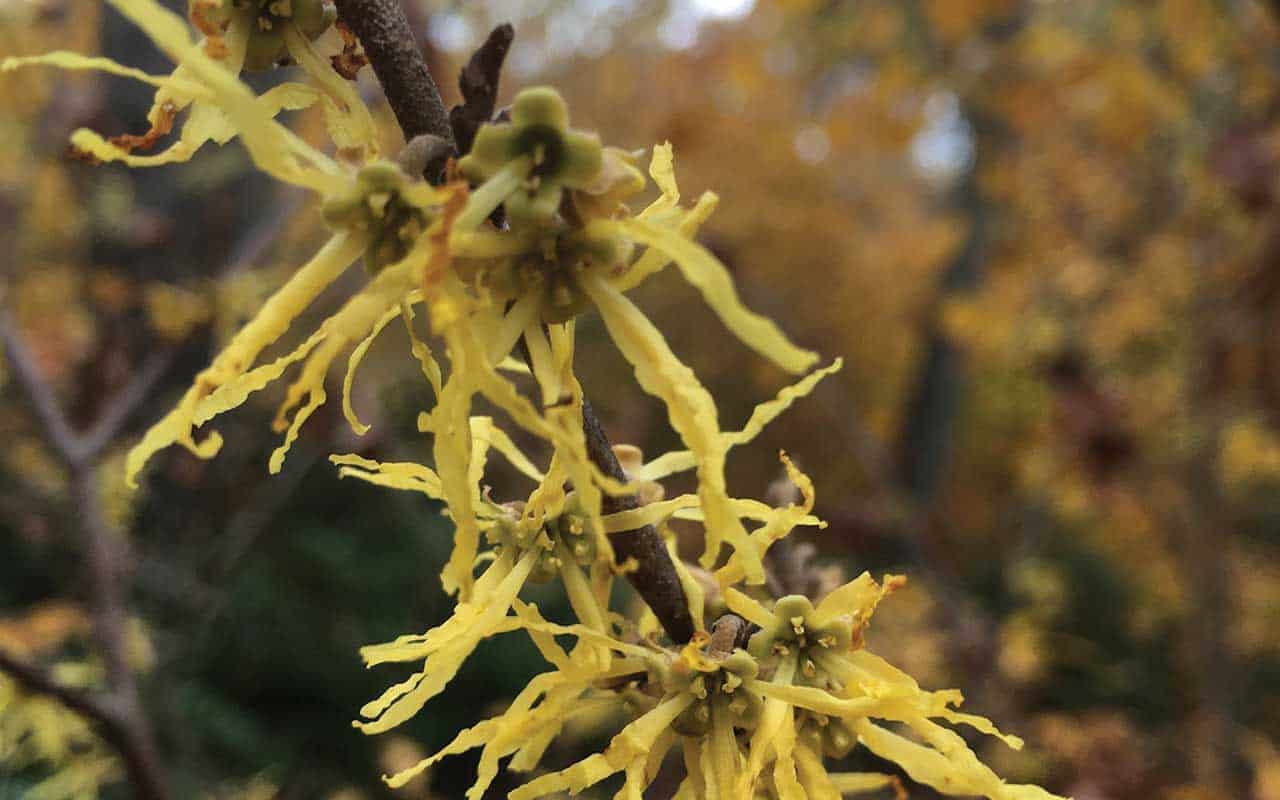 To learn more about witch hazel, go to www.americandistilling.com. This article was adapted from the November Great Mountain Forest newsletter. The author is the GMF director of communications as well as a regular contributing writer for Main Street Magazine.