Doctors and scientists have long searched for new and innovative ways to detect and diagnose deadly diseases and cancers in patients since the dawn of advanced technology in the field of medicine. Recently, an unlikely ally has emerged that may revolutionize the way some cancers are diagnosed and treated. Research from Inscentinel, a UK-based firm specializing in insect research, suggests that honey bees can be trained to detect certain early-stage cancers in humans. As a result, Portuguese designer Susana Soares has developed a device that utilizes honey bees and a detection method involving a patient’s breath. “Bees have a tremendous sense of smell.” says Gino Robustelli, a local beekeeper who currently runs the beekeeping initiative at Silo Ridge in Amenia, NY. Thanks to that highly sensitive sense of smell, bees can detect odors far too subtle for the human nose. As Soares explains on her website, scientific research demonstrated that bees can diagnose accurately at an early stage a vast variety of diseases because certain biomarkers associated with tuberculosis, lung cancer, skin cancer and diabetes, which can all be detected through smell, are 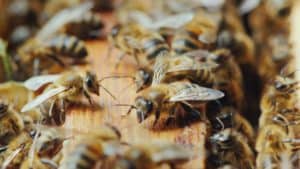 present on a patient’s breath.

The design for Soares’s detection device includes two enclosures: a smaller chamber that serves as the diagnosis space and a bigger chamber where previously trained bees are kept for the short period of time necessary for them to detect general health. People exhale into the smaller chamber and the bees rush into it if they detect on the breath the odor something that they were trained to target. According to an article from mashable.com, “The cancer-detecting bees are trained by exposing the insects to the smell, then feeding them sugar, so they associate the odor with a food reward.” Soares says via her website, “The objects facilitate bees’ odor detection abilities in human breath. Bees can be trained within 10 minutes using Pavlov’s reflex to target a wide range of natural and man-made chemicals and odors, including the biomarkers associated with certain diseases. The aim of the project is to develop upon current technological research by using design to translate the outcome into systems and objects that people can understand and use, engendering significant adjustments in their lives and mind set.”

For more information on the project visit susanasoares.com