How Green Was My River: A Portrait of Hillsdale’s Green River Hamlet

The hamlet of Green River in the northeast corner of Hillsdale has intrigued and puzzled the Hillsdale Historians for some time. Franklin Ellis’s History of Columbia County (1878) identifies it as “…a hamlet in the valley of the Green river … formerly known as Green River Hollow.” But immediately to the north, in the town of Austerlitz, is another area identified on old maps as Green River. It can be hard to tell, topographically, where one ends and the other begins.

There may once have been a unified “Green River” hamlet straddling the Hillsdale/Spencertown line, but in 1818 when the town of Austerlitz was created from chunks of Nobletown and “Spencers Town,” the dividing line ran straight through Green River Hollow, separating the “Upper Hollow” from the “Lower Hollow.” The Lower Hollow, where Route 71 branches off from Route 22 on the way to Egremont, is what we identify today as Hillsdale’s Green River hamlet. 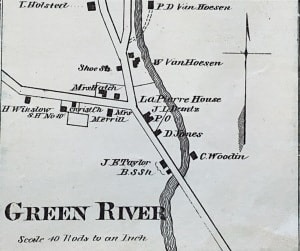 An 1873 map of the Green River Hamlet shows a Christian Church, a School House (“S.H. No. 10”), the blacksmith (J.E. Taylor BSSh, or Black Smith Shop), the LaPierre House, the Post Office, the Shoe Store, and the W. Van Hoesen house, reputed to be the oldest in the hamlet.

Green River is named for the river on which it is located. The Green River rises in the extreme north of Austerlitz on the Canaan line from “No Bottom Pond,” named for the tradition that no soundings, however deep, have ever found the bottom, and flows southeast through Austerlitz, across the northeast corner of Hillsdale, and empties into the Housatonic River in Connecticut. According to Ellis, when the water is high the river “has a greenish appearance” and was “noted for the abundance of trout it contains.” Ellis describes the hamlet as “… contain[ing] a Christian church, a hotel, a school-house, a shoe-shop, a blacksmith shop, and about a dozen houses, with a population of about fifty.”

Or take this 19th-century tool, a product of the Brainard Tool Company, manufacturer of high-quality gauges and bevels. It’s stamped “Brainard Green River” but – you guessed it – the factory was located in the other Green River.

In 1976, local historians recreated what they believed to be the path of General Henry Knox when he transported cannon and munitions for the relief of General Washington at Boston in 1776. They were sure that Route 71 through Green River was part of the “Noble train of artillery” and they even installed a marker at the intersection of Routes 22 and 71. But more recent research suggests that Knox took Route 71 out of Great Barrington to North Egremont and from there traced what is today Shun Pike Road to the Hillsdale line and White Hill Lane (although the connection between the last two roads has long been abandoned).

The 1871-72 Gazetteer and Business Director of Columbia County reports that “Cols. William Tanner and Jared Winslow” were among the first to settle near Green River, perhaps in the earliest years of the nineteenth century. The oldest house in the hamlet may be a circa 1837 dwelling built as part of a 200-acre farm by a W. Van Hoesen. The house its still identified on late 19th century maps as the Van Hoesen house. Chuck Van Hoesen, a descendent, grew up in the house and remembers his mother making sandwiches to sell to the workers building Route 22. The house is purported to have once been the home of a Revolutionary War General’s nephew, but we couldn’t confirm that, and this is where history becomes hearsay. Although “the home of a Revolutionary War General’s nephew” tickled us in the same way that “the name of the Lone Ranger’s nephew’s horse” from “A Christmas Story” always has. (Answer: Victor. Look it up.)

One of the oldest cemeteries in Hillsdale is at Green River. It’s known as the Hatch Burying Ground and is located on the south bank of Cranse Creek. The Hatches were early settlers from Cape Cod and Isaac Hatch for many years kept a tavern house one mile south of William Tanner. The Hatch Burying Ground has been encroached upon by a change in the course of the stream, so much so that in Ellis’s 1878 History of Columbia County the headstones were described as “much broken and defaced.” Ellis records as among the oldest inscriptions “Mrs. Isabel, wife of Mr. Elisha Hatch, died July 23d, 1767, in her 43d year,” “Mr. Elisha Hatch, died. April 15th, 1770,” “Mary, wife of Mr. James Stevenson, died Jan. 1st, 1783,” and “Lieut. Willard Shepard, died March 2d, 1784.” Almost none of the stones today are legible, save one headstone dedicated to Nathan Rolo, age 11, who died in 1788.A later cemetery, connected to the “Christian Church” identified on early maps, is located directly behind Noble House, a bed and breakfast on Nobletown Road that was formerly the Inn at Green River. The graveyard has 168 interments, the earliest being Katherine Webster in 1807 and the weirdest, it is alleged, being the unmarked remains of Simon Vandercook, murdered by the Austerlitz Cannibal in 1882. It is also the final resting place of nine American Revolutionary War veterans.

As late as 1905 colliers were still making charcoal in Green River. That September, a load of charcoal backed under a shed attached to the LaPierre Hotel caught fire during the night, destroying the premises and some adjoining buildings and causing the occupants to escape “scantily attired as they had only had time to grab up some clothing before making a dash from their rooms.” The LaPierre has been a popular destination for New York City visitors and the location of parties and events in the late 19th century. We were told by one local resident that it was rebuilt as “the American Hotel,” but we’ve not been able to corroborate that.

In Looking for Work: Industrial Archeology in Columbia County, New York, author Peter Stott suggests that Green River may have been a product of the 19th century turnpike mania. “A measure of the activity … generated may be seen in Tanner’s turnpike plans. Between 1805 and 1808 [William] Tanner [who opened a tavern here] was named as an incorporator of three separate turnpikes which were planned to radiate from Green River” to the Albany Post Road south of Kinderhook, to the Columbia Turnpike (today’s Route 23) and to Hudson via Harlemville and Mellenville.

Speaking of taverns, a 1845 meeting of the Columbia County Temperance Society on the success of temperance efforts in the county reported “In Green River part of Hillsdale, the cause was retrograding — two or three places there sold [alcohol]. One man had lately died of delirium tremens and if the reform did not progress, more would die; there was much drinking there. It was one of the worst holes in almost any place.”

In 1913, road placement, and the funds that go along with it, became a hot issue as east county residents argued over four proposed routes for a State Highway running from Hillsdale to Chatham. Proponents of “Route One,” (today’s Route 22) running from Hillsdale to North Hillsdale, Green River, Austerlitz, Spencertown and on to Chatham, fought off a late challenge from residents of Claverack who wanted the road to run through the village of Philmont. Former State Senator Stanford W. Smith, speaking at the hearing, sniffed, “Claverack, with ten miles of state and county highway, has had about all the public money that should be expended there until other towns that have had no money spent for highway purposes get a share of the benefits.” 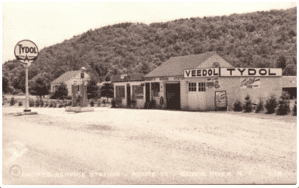 The 1958 Chamber of Commerce map of Hillsdale (you can see it on the wall of Crossroads Food Shop), shows Creighton’s Shell Station on Rt. 71, about a mile and a quarter south of the “Y” intersection of Rt. 71 south of Rt. 22.

Deborah Bowen, former owner of the Inn at Green River, kindly shared her knowledge of the Green River hamlet with us. Deborah bought her building in October 1987 intending to restore and flip it but, nine days later, the stock market crash known as Black Monday hit and she had to pivot to Plan B. She opened the Inn at Green River in July 1989 and operated it until March 2020, when COVID shut it down.

Deborah regaled us with stories about one of the previous owners, Henry Murphy, who worked in the New York theatrical industry and hosted weekend house parties with guests like Bette Midler and Rue McLanahan. A practical jokester, Henry would encourage his guests to walk out into the fields after dinner, where, with dusk falling and mist rising off the Green River and the Cranse Creek, he would sneak up on them wearing an old WWI silk parachute sewn into a leather pilot’s helmet. “They thought he was a ghost — it totally freaked people out!” said Deb.

A guest who’d grown up in Green River told Deborah that The Inn at Green River had once operated as a bordello in the 1950’s. “Ma Thorsden,” a resident of Upper Hollow Road, operated three bordellos: two in Green River, and one in Austerlitz. The late Robert Herron, a renown Austerlitz historian, confirmed the truth of this report to Deb. We’d like to find some evidence, like a newspaper report of a police raid, but perhaps Ma was too wily to get caught. Or she bought off the cops. We’re still looking.

Do you have memories of, or stories about, Hillsdale’s Green River Hamlet? Leave them in the comments section, below.

Many thanks to Deborah Bowen, Sean Fagan, Rick Rowsell and Ron Harrington for sharing their Green River knowledge with us. 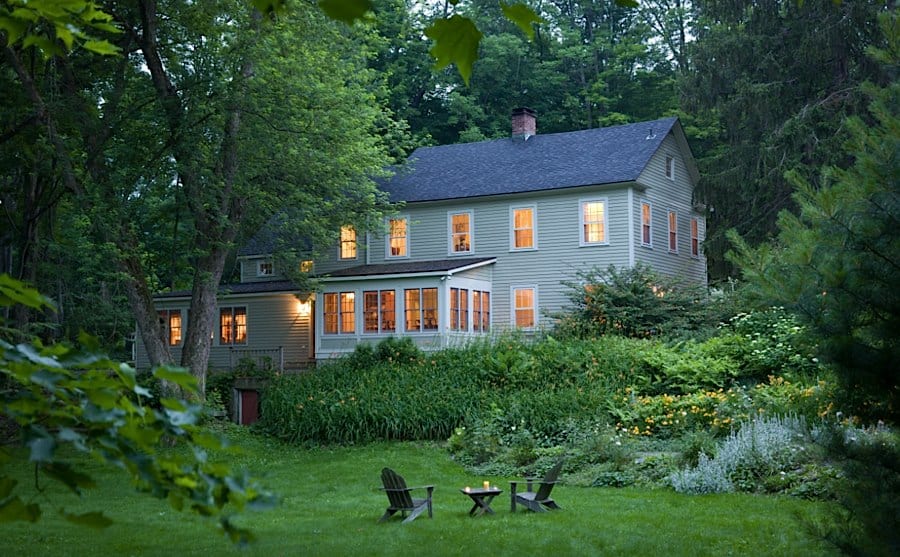 The Inn at Green River