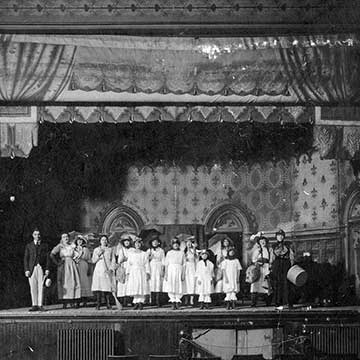 When one views the renovated Hudson Opera Hall, now formally known as Hudson Hall at the Historic Hudson Opera House in the center of this chic town located along, quite appropriately, the slow rolling Hudson River, it is difficult to imagine the structure was once in a state of serious decay.

“The building sat vacant for around 30 years,” explained Executive Director of the Hall for the past 19 years, Gary Schiro, as he stood in the performance room where workers were busy getting ready for a presentation. “There was water pouring through the roof when it rained and the building’s interior was in bad shape.”

Well, thanks to a multi-million dollar effort, Hudson Hall, which once served as Hudson’s City Hall among other functions, is a stunning homage to what a group of committed people, as well as proper funding, can do for an historic structure and a community.

According to the Hall’s website, it was in 1992 that a group of concerned citizens came together to save the opera house, which, by the way, is New York State’s oldest surviving theater. The structure was built in 1855 and was designed by local architect Peter Avery. As mentioned, for more than a century it housed various civic offices, including a post office and police station, and was also home at one time to the Franklin Library and the First National Bank of Hudson.

The showpiece and center of much activity for many years was the building’s auditorium on the second floor, which was used for everything from theatrical presentations to cotillions and poultry shows. Reportedly, Frederic Church and Sanford Gifford showed paintings here, Bret Harte read poems, and Henry Ward Beecher gave an abolitionist lecture. Susan B. Anthony visited at least twice, the first time speaking about abolishing slavery, and the second time to rally support for women’s suffrage. In 1914, President Teddy Roosevelt even thrilled a crowd with recounts of his adventures in Africa.

In 2016, Hudson Opera House embarked upon the largest and most significant phase of its preservation efforts, the centerpiece of which was the restoration of its magnificent upstairs performance hall. The $8.5 million project was funded through two grants from Empire State Development: a $1.3 million Capital Region Economic Development Council Capital Grant, and a $1 million Restore NY Grant; an $800,000 matching Environmental Protection Fund grant leveraging in grants from the New York State Office of Parks, Recreation and Historic Preservation; nearly $100,000 from the New York State Council for the Arts; and $3 million long-term financing from the U.S. Department of Agriculture Community Facilities Loan Program in partnership with Kinderhook Bank and with bridge financing made available through Key Bank. The remaining funding was supported through investments from members of the Hudson Opera House Board of Directors, numerous foundations, and private sponsors.

In April of this year, Hudson Opera House celebrated a grand reopening of the building with a name change. In the spirit of “inclusiveness” the organization and building is now known as Hudson Hall at the Historic Hudson Opera House. Hudson Hall now serves the community with a year-round program of cultural and educational events and continues to be a catalyst for the regeneration of downtown Hudson and the surrounding region.

The history of the building

Now, back to the building’s early history. According to the Hall’s website, in early 1854 a movement to build a permanent City Hall began to grow due to extreme overcrowding at lectures. On March 10, at the first meeting of the newly elected common council, the then mayor promised to have a new City Hall up before another year. The charter was rewritten to allow $12,000 to be allocated to the construction. Although there were rumors that B. S. DeForest of Albany’s plans were favored, the council decided to adopt the plans of Peter H. Avery of Hudson. His plans were published in the newspaper Star on May 19, showing plans for 400 gallery seats and room for 2,000 people overall. On July 1, the Common Council contracted A. Calkins to build City Hall as he had the lowest offer. The final price was $12,975.
On May 28, 1881, all events at City Hall stopped until townspeople voted to appropriate funds to improve the “City Barn.” In August of that year, $2,770 was given to Denegar & Cure of Hudson to completely redo the Opera House. On October 27 a new drop curtain arrived. On November 9 the hall was rededicated the Hudson Opera House. The building came under the auspices of several agencies and organizations in subsequent years, but remained a vital part of town life well into the 20th century until it finally sat vacant that 30-year stretch.

But all that has changed and the Hall is again taking its place in the cultural future of Hudson and beyond with myriad operas, musical, and dance performances, events, readings, and exhibits. The Hall is also very active in conducting community outreach programs, some of them geared toward children of various ages.

The architecture and operas

The building is Greek Revival in style on the outside (columns inlaid into the exterior to give the building a most classical appearance), with the inside sporting a modern, clean look, white or gray walls and wood flooring producing a subtle backdrop and feel to exhibit space (where a photo exhibit was on display on a September afternoon), and the upstairs. An elevator has been installed to allow easy access to the second floor for all visitors, with a walkway leading into the main performance hall, which can accommodate several hundred people for presentations and events. The building is graced with tall windows that can let in ample ambient light when so desired by the staff. The windows are impressive from the outside. Work is ongoing to finish the renovations to the balcony area of the auditorium.
“We are very proud of the work that was done to make this building what it is today,” said Schiro. “At one time there were all types of events held here; operas, boxing matches, dances, minstrel shows and lectures. It really was the center of activity in the town.”

Many in town and beyond will once again fill the Hall when the opera The Mother of Us All is performed in November. Ironically, the play is about Susan B. Anthony, who, as mentioned, made appearances at the building in its former life.

“We know that she spoke here at least twice,” said Co-Director of the Hall, Tambra Dillon, “and this is the 100th anniversary of the women’s right to vote movement. The opera (written by Virgil Thomson and Gertrude Stein) is being directed by a real up-and-coming director, R.B. Schlather, and it’s a insanely ambitious undertaking, with a huge cast that will be gathered from the surrounding area. All of the performers involved are professionals and Schlather sees the play as a community experiment that will draw many people to perform, as well as view the opera. And it’s a very timely event in honor of Susan B. Anthony.”

It is inspiring to see that a magnificent building that was falling victim to neglect and the ravages of time has been so lovingly and exquisitely restored to once again be a focal point for the arts and more in Hudson and Columbia County. •

To learn more about Hudson Hall or for upcoming events and other information, visit www.hudsonhall.org.