Following Governor Kathy Hochul’s announcement that more than $81 million has been awarded to priority projects across New York State through the Regional Economic Development Initiative, the Hudson Valley Shakespeare Festival (HVSF) has announced that it is one of the 97 projects that will receive reimbursable funds from Empire State Development (ESD). The ESD grant, worth $2 million, will allow HVSF to be reimbursed for project-related costs after receiving approval from the Philipstown, NY, Planning Board to progress with its anticipated permanent move to The Garrison.

“We’re thrilled to have this extraordinary support from Governor Hochul and the State,” said Kate Liberman, Managing Director at HVSF. “We’re also honored to be among the other prestigious cultural organizations that are also recipients of this award.” 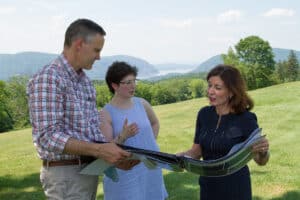 Hudson Valley Shakespeare Festival was among one of 18 grant recipients in the Mid-Hudson region, including Storm King Art Center. The Roundabout Theatre Company (Roundabout), in New York City was awarded funds to renovate its theater venue.

“Support for the arts like this contributes to a more interconnected and resilient Hudson Valley, a community we’re very proud to be a part of and to serve,” said Davis McCallum, Artistic Director at HVSF.

The ESD awards are granted through a rolling process, bolstering projects with the potential to inspire economic growth across the state following the hardships of the COVID-19 pandemic. The HVSF project aims to build a resilient economy and create local jobs by adding nearly 50 seasonal staff positions, plus five more year-round administrative posts as the season could extend up to six weeks into October in its permanent home. HVSF estimates that with this growth it could double its annual local economic impact up to $7.6 million by 2024 according to the Americans for the Arts impact calculator. The organization also has environmental aspirations, with hopes of transforming the former fairways of The Garrison Golf Course into ecologically-maintained native meadows and wildflower gardens. The golf course will close as of November 28, 2021.

According to New York State Lieutenant Governor Brian Benjamin, the projects receiving grant funding were chosen for their innovation, impact on their communities, and potential for positive change coming out of the pandemic. He noted that, “whether it is workforce development, tourism, green investments or domestic manufacturing, we are moving forward to foster a strong and prosperous economy in New York State.”

Check out the Hudson Valley Shakespeare Festival at hvshakespeare.org