Let’s start with the basic, unemotional information.  Hymn, a new play by British playwright Lolita Chakrabarti is running at the Elayne P. Bernstein Theatre on the campus of Shakespeare & Company in Lenox, MA through August 28th.  The “two hander”  is directed by Regge Life and stars Kevin Craig West and “ranney.”

Now, for the emotional reaction.

A bit of explanation is likely required.

Two men meet at a funeral, not by chance.  There is a reason that Benny (ranney) is in attendance and within a few edgy, crisply scripted moments, Gil (Kevin Craig West) not only understands, but is thrown into personal turmoil.  The funeral, as it happens, was for Gill’s father – a difficult, driven, sometimes distant man whose influence on Gil’s life becomes obvious as the story unfolds.

As for Benny, even attendance at the service was a challenge … but one he met face on, and carried forward.  Through 95 minutes of precisely staged vignettes replete with period music both played and sung (and danced), the relationship between these two men who meet as strangers and part as deeply bonded friends grows with laughter, turmoil and … dare we say it … love.

The trio who have brought this stunning play to life share not only a clear commitment to the profound integrity of the piece, but a dedication to live theatre that is palpable.  Regge Life has directed some of the most impressive pieces offered up at Shakespeare & Company over the past seasons and his reputation is surely enhanced with Hymn.  Regge is a master, and watching one of his productions is a deeply fulfilling experience.

“ranney” appeared last season in the company production of Art and the comedic timing, exuberant characterization and, now, his musical and choreographic skills brought to this production are profound.  When he sings, we want to sing along.  When he dances, we tap our feet.  When he digs deep to deliver the most difficult lines of his character’s life, we ache with him.

Kevin Craig West has built a flowering career that reaches across theatre, film and television.  He is an actor who takes the stage to the muttered recognition of an audience who wonder “where have we seen him before?”  It is seeing him now in the cascading development of a man living what seems like a life of great accomplishment that gets caught in the avalanche of brutal reality that demonstrates his great range.

Together, Benny and Gil move seamlessly through the process of starting as strangers and becoming fast, fully reliant friends.  Hymn is a play about relationships – fathers and sons and brothers.  It is a play about the human condition – strength and weakness, exultation and despair, sequined jackets and dance moves from another era.  The play’s title becomes a double entendre – Hymn and him.  It is reminiscent of Jean Paul Sartre’s “Being and Nothingness.”  This play is about “the other.”

Hymn is not a musical, but there is music throughout and playwright Chakrabarti has welded the lyrics of such standards as “Papa Was a Rollin’ Stone,” “Rapper’s Delight” and, most profoundly, “Lean on Me” into a story line that captures the indelible message of two men who find profound friendship that can only be ended by life’s final curtain call.

Tickets for Hymn are available on the Shakespeare & Company website – www.shakespeare.org or by calling the box office at 413-637-3353. 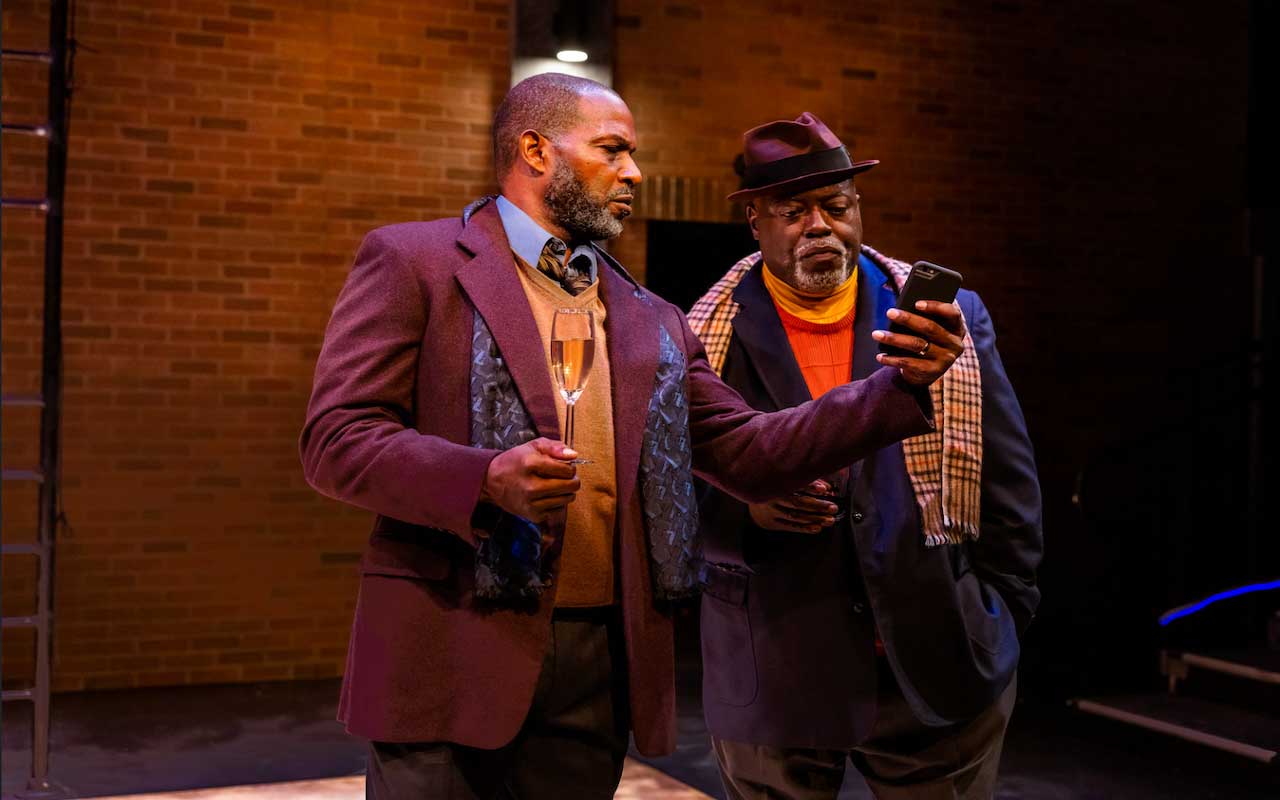