“The Earth took me in, held me and taught me the wonder of my senses: to see beyond clouds to fantastic beings, to hear the weather in the wind, to smell the stories of trees, animals, streams, and to feel the soft mosses, waxy leaves, and sun-warmed stones below the skin – to feel them with my soul,” says Ellen Lynch a photographer in Stuyvesant, NY.

Lynch, who is renowned for capturing the grace, freedom, and beauty of horses, also connects with subjects that relate to nature. Raised in a rural community in Western New York, forests, fields, and the local dairy farm where Lynch worked, fostered her curiosity and innate embrace of the natural world. Trees and creeks were Lynch’s playground, and dogs, cats, horses, and cows were her companions.

Her family of perpetual crafters and makers did a lot to nurture Lynch’s creativity. Gifts and toys were made rather than purchased from the local shop and playing outdoors was the norm. Instead of complaining about the boredom that can accompany children on rainy days, Lynch welcomed opportunities to produce her own plays or create birdhouses made of popsicle sticks.

When Lynch entered college, she pursued the arts. In 1984, she earned her Bachelor of Fine Arts (BFA) degree from the State University of New York at Purchase. “Photography has always been a curiosity for me. I did a bit in school, but never enjoyed being in the dark room all day, so I switched my focus to graphic design,” says Lynch.

After working in Manhattan as a graphic designer for more than a decade, Lynch realized that, thanks to the internet and express mail services, she could work from anywhere. In 1996, she packed her bags and headed out west. Lynch landed by the Grand Teton mountains in Idaho. She believes that this region of the American West is the most beautiful place on Earth. It was the rugged, natural beauty that inspired Lynch to pick up her cameras once again.

While maintaining her client base in New York, Lynch wandered the mountains on horseback with her camera in tow. The focus of her eye: the grandeur of the granite peaks, the dramatic skies, and the animals who make their home there.

The beauty of the land and Lynch’s sense of wonder about the cowboy lifestyle and horses, provided endless opportunities for her to practice her craft. Just as photography always captured Lynch’s interest, horses always sparked her imagination. The serenity and stunning vistas out west are what kept her in Idaho for 15 years.

At the time, Lynch was still working in film – both 35mm and larger formats. She says that she is always grateful for the discipline the limitations of film have taught her – to learn to choose judiciously and when to press the shutter on a roll of film that only offered 24 images.

As technology evolved, Lynch switched over to digital cameras, which enabled her to use the photographic skills that she learned with film in combination with the Photoshop editing techniques that she developed as a graphic designer. It proved a powerful combination.

At home in the Hudson Valley

In 2010, Lynch returned to the east coast. She was drawn to the Hudson River Valley for its extraordinary light. The Earth and horses continue to be her key areas of focus.

The Earth showed Lynch that special things can happen at any time. “Ephemeral moments and light that will never exist in exactly the same way again, inspires me to savor and preserve those moments in photographs,” she says.

Lynch photographs the Earth simply because she enjoys being in the great outdoors, but horses continue to inspire her. “I enjoy the challenge of capturing that dusty turn, a glance, or a perfectly collected stallion galloping across a meadow. My goal is to share their essence and the admiration and awe I feel when they’re present,” reveals Lynch.

Lynch’s studio gallery opened this summer. The idea evolved from a previous venture – a pop-up space that Lynch launched in Chatham, NY, in 2017. At the time, friends loaned her a baby grand piano and each weekend over the course of three months, she offered concerts, readings, and other artist presentations.

“Once I had my first exhibition up, I knew I wanted to share it with other artists and create a community space for the town,” reveals Lynch. “I knew the Chatham pop-up was temporary and not sustainable for one person, but I really missed the space when it closed.”

Right before the pandemic, Lynch began networking and sharing her idea with others. The concept was met with much enthusiasm. Lynch’s first exhibition and reception at her new studio gallery was a dual event for her exhibition, Ephemeral and Cocktails with Cattle, which celebrated the miniature Herefords at BenzWick Acres. The herd’s impressive genetic background hails from high quality registered stock from Nebraska, Illinois, Ohio, and South Carolina.

The event was well received by the community. More than 120 guests attended the summer 2022 opening, which helped the BenzWick Acres promote the animals. The opening offered guests a rich experience in which they viewed photographs, enjoyed some libations and snacks, and visited and fed cattle. Lynch describes the event as “art in the yard and cattle out back.”

“The reception was truly a community event that celebrated the Hudson Valley’s agriculture and culture,” mentions Lynch. Lush bouquets of blooms were provided by Stuyvesant’s Damsel Garden and the wine was provided by The Kinderhook Bottle Shop. Lynch was grateful for Bray Kowalski of Royal Services Property Management and his girlfriend who filled in as bartenders. Locally prepared Mexican fare was enjoyed by all. 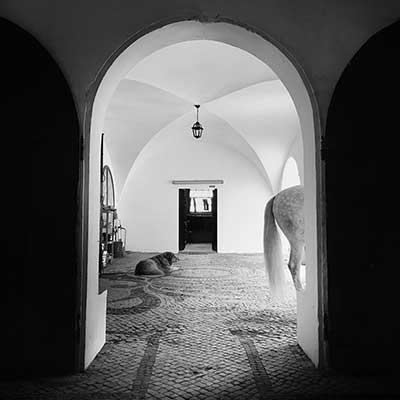 Lynch’s Ephemeral is still on view by appointment only through Labor Day at her studio gallery in Stuyvesant.

The collection of platinum/palladium prints expresses the ever-changing fluidity of horses, which includes their power and motion. “One of the things that has always fascinated me about horses is their duality – their wild spirit and power coupled with their gentle, grass-eating ways. They are ethereal beings, yet grounded firmly on the earth,” she adds. Due to Lynch’s deeply felt connection with horses, they proved to be easy partners and subjects for her.

Using the historic platinum/palladium metals process, which was developed 200 years ago, coupled with negatives made from her digital files, Lynch believes that this process is a harmonious fusion of old and modern technologies.

“Coaxing an image to come to life through this process feels quite similar to the patience required when working with a young horse – trying different things to achieve a desired result. Both are equally rewarding. Even watching the images appear in the developer tray feels like horse magic to me,” says Lynch.

As the most archival photographic process – because the image is embedded in the fibers of the paper – the images offer a reflection of the enduring trust and connection Lynch has been fortunate enough to experience with horses. “If I could infuse the smell of them into the images, I would,” she adds.

The photographer welcomes individuals as well as school and youth groups to her studio gallery space. Last month, she partnered with Ilze Earner, who runs Safe Haven Rescue in Hudson, NY. It offers a two-week “Ride and Read” program, which educates children on how to take care of horses. They also spend time reading stories with horse-centric themes. The camp took a field trip to Ellen Lynch Photography to talk about horses and view the photos.

“I love having children in the studio gallery. They are so curious and engaging. I hope to have more students come in with their classes in the fall,” says Lynch.

The next exhibition, which will launch this autumn, will present a new series of giclee photographs captured this past spring in Idaho where Lynch still maintains a tie to a working cattle ranch. Some of the photos capture the beauty of her own horses. The exhibit will be paired with a concert performed by acclaimed pianist Robert Logan.

Also in development is a monthly salon, a casual gathering of creative minds and hearts with artist presentations and forums. “The goal of this studio gallery experiment will continue to bring together and celebrate the talent and community that is abundant in the Hudson Valley,” concludes Lynch.

“In offering my images, I share my veneration for our home. I share that place in myself that is of the Earth. I share a reminder to look up, to look down and to look within, a reminder that we are all the Earth. As the Earth is, we are.”

To view the current exhibition, please contact Ellen Lynch at Ellen Lynch Photography, Stuyvesant, NY, or by calling (208) 390-9088. You can also visit her online at ellenlynch.com.