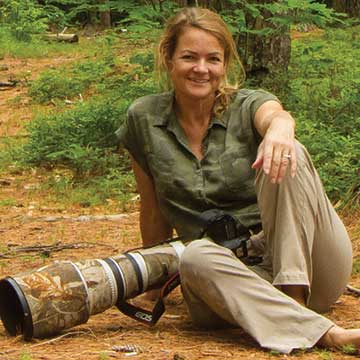 On a weekday morning before a luxury product shoot at her studio in Salisbury, CT, on Salmon Kill Road, I talked with Sarah Blodgett about her lifetime career as a commercial photographer and her new passion for wildlife photography.

How did you decide to become a photographer?

I was born in New York City and lived there until I was five when my parents moved to Pine Plains, NY, and I became a country girl. My father was a successful commercial photographer who also did work for magazines like Look and Life. He was part of the Madmen generation; in fact I saw an ad he did for Hilton Hotels on one of the shows.

I got my first camera at age ten; it was a Kodak Ektralite, one of those flat-flash rectangular plastic cameras.  At 18 I enrolled in the San Francisco Art Institute and learned the mechanics and the art of photography back in the days of dark rooms and film.

It’s really actual work experience that makes you a better photographer. Initially I started out doing photographic portraits of friends. My first clients had eloped and wanted a nice portrait to share with their family. In the late 90s when Pine Plains attracted creative types I opened my own photo studio. I’m an all-around photographer – I do everything from real estate photo shoots for designers and builders, to magazine covers, products and portraits. A good photographer has to wear lots of hats to make a living.

Have iPhones and selfies affected your business?

Of course, but there’s still a need for creative, trained professionals who can create interesting lighting and composition and use software to retouch.

When did you go digital? Was it a difficult transition? Do you still use film?

I started shooting digitally in the early 2000s. It was a difficult transition but a necessary one. Every once in a while I’ll still shoot a roll of film for a creative project. I miss the physicality of film photography, the processing, working in a darkroom, moving around. Digital photography processing is very sedentary with everything being on a computer, my dance routine while working in the darkroom became ancient history!

I used to have a large collection of antique cameras and I used to shoot with all of them including a reproduction 4×5 box camera, complete with the dark cloth and cable release cord. In some moment of insanity I sold all of my cameras and I miss them.

When did you add wildlife to your repertoire?

About six years ago a friend of mine encouraged me to try photographing wildlife. I was immediately hooked!  I’m building my body of work and getting my name out there as a nature photographer. I was getting a little bored with my day job photography and needed something new. Since I had always been a birder it was a natural step to go into long lens photography. The first thing I learned was that wildlife photography, especially birds, is hard!

Birds are always moving quickly, the light changes depending on where they are and you have to shoot manually at the fastest possible shutter speed in order for that slim chance that you’ll get a good shot. Birds in Flight – BIF’s – as they’re known in the business, are the most difficult. Even though, as they say, wildlife photography is 95% disappointment and 5% ecstasy, there’s nothing I would rather be doing and the work has actually made me a much better photographer in my day-to-day work. Recently I spent five days by myself in the Everglades in a tent – it was sublime. Being able to settle into a place and get to know who’s living there (in the animal kingdom) is the key to getting great shots. I usually need to scout out an area several times before I can figure out the best shooting vantage points. The Everglades are so peaceful and fairly void of humans, which is my preferred venue.

What special equipment do you need to photograph animals in the wild?

For starters you need at least a 300mm high quality lens so you can capture detail at a distance. I began by saving up my cash to get a telephoto lens. The first lens I bought was a Canon 100-400 zoom lens that turned out to be not quite tack sharp. After a year of learning the basics I graduated to a Canon 500 mm fixed focal length lens, which I bought, used from another well-known wildlife photographer. It’s as long as my arm and weighs 8.5 lbs. You also need lots of dorky clothing in order to blend in with your surroundings – camouflage pants and poncho, rubber pants for the water, and great snacks. I have a hat with a built in light so that I can turn it on to see my camera settings early in the morning when animals are active. I have a blind, which looks like a small tent, outfitted with windows and doors designed for cameras. I use the blind for fox dens and other shy birds that I might not otherwise be able to get close to.

Do you photograph all kinds of animals? How do you know where they are?

I try to find subjects wherever I am – birds, foxes, and coyotes locally. I had a chance to photograph bears, moose, and mountain goats in Montana. I’m headed to Southern California next week and hope to find mountain lions and bobcats as well as birds. There’s a network of wildlife enthusiasts on line, which are a great resources, and I also check in for tips with the local National Wildlife Refuges or Audubon Centers.

How do you develop a reputation as a wildlife photographer?

Winning contests is what gets you known. It’s a growing field with more and more competition. Some people say it’s the “new golf” because it’s highly populated by wealthy, retired folks. I have placed twice in the top 100 of the annual Audubon photo contest, which is a huge honor. I’ve had my work published in Bird Watching Magazine, National Wildlife, Audubon, and Wild Planet Magazine. Usually this also involves writing, which I really enjoy. Now I’ve added speaking. Most recently I did a slide show and presentation about photographing birds at the Sharon Audubon Society.

How do you make a living photographing birds?

I support my wildlife photography with print sales of my work, as well as my commercial photography business, portraits, real estate, and product photography. My website, www.sarablodgett.com showcases my work and photographic services. On Facebook and Instagram I interact with my fans and friends daily, posting recent projects and subjects.

Ecotourism with burgeoning photographers is another opportunity to use your skills. Leaders and co-leaders of these tours are encouraged to teach photographers not only how to get great shots but to be respectful to their subjects and the environment in which they live. These gigs can be a day-long workshop or a full, weeklong photo tour in places like Africa, Norway, Antarctica, etc.

Every photographer has to hustle – it’s part of the business.

Are there wildlife photography ethics?

I quickly learned how important it is to understand and respect animal behavior. You never want to stress an animal or bird (especially a nesting one) with your presence. It’s important to be sensitive to the clues they give you and for you to retreat if the signal is to “bugger off.” The perfect shot is never worth scaring a duck off her nest, or keeping a fox mother from delivering a meal to her kits. There are other issues too. For example some photographers will cut a branch out of the way of a known nest, in order to have a clear view. This branch could have been offering shade, a perch, or privacy to nesting chicks and parents. In short, it is always best to put the needs of your subjects before your own. For example, I can’t justify using drones for wildlife photography – introducing unnecessary stress into their world.

What are your favorite places to shoot?

The Salton Sea in California is one of my favorite places to shoot. It’s on a migration path in Southern California and is host to around 400 species of birds. New York State has a wonderful variety of birds that are full-time residents as well as vast array of migrants that pass through or come to breed in the springtime.

One of my favorite East Coast haunts is the Delmarva Peninsula in Virginia where I visit Chincoteague and Assateague Islands as well as the Blackwater Preserve. These habitats offer amazing shore birds as well as other birds and animals such as the little sika deer, which were imported years ago from Japan.

What makes your photos distinctive?

I always try to take an artistic approach in whatever I do. I was trained as an artist and I just can’t help myself! I believe that my work is worthy of being called fine art not only because of its visual appeal but because these images will become part of our history. As more and more birds disappear because of climate change and human expansion, what will be left is our visual story telling through art and photography.