In the Holiday Spirit 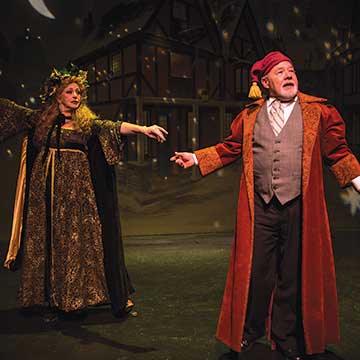 Just a few miles from the Village of Rhinebeck, NY, is The CENTER For Performing Arts – a local theatre whose actors are eager to spread some holiday cheer through their annual presentation of Charles Dicken’s classic, A Christmas Carol.

The production, which runs from November 19 through December 20, is currently in its 15th year at The CENTER. As in previous years, it will utilize the same script – a faithful rendition of Dicken’s immortal ghost story.

A Christmas Carol is directed by Lou Trapani, managing director of The CENTER. Beyond acting as producer and director, Trapani also plays Ebenezer Scrooge – a miser who detests the Christmas holiday and all the goodwill and cheer that accompanies this festive season.

Trapani, who has been at The CENTER since 1995, has been managing director since 1999. He has produced and directed more than 100 shows at The CENTER and acted in countless other productions. Trapani has also been on the board of directors since 1997.

“A Christmas Carol is the most satisfying production The CENTER presents. Audiences love the story and particularly our take – the addition of 33 of the world’s most beloved Christmas carols. Not only is our production a carol in the Dickensian sense, it is a compilation of many carols,” says Trapani.

Unlike the miserly character he plays, Trapani truly embraces the spirit of giving. “Since I wrote the script, direct it, play Scrooge, and produce the show, it’s my gift to The CENTER.” Trapani never draws a salary for the work he does for this annual production and he doesn’t charge royalties. Every year, this sends A Christmas Carol into the top slot as The CENTER’s highest-netting show. Since this classic is presented every holiday season, the net revenue it garners enables The CENTER to settle its year-end debts and start anew.

“Personally, I relish playing Scrooge as I view his function in the play as the essence of redemption. We all need to believe in redemption,” says Trapani.

Tapping into the past

Initially published in London in 1843 and illustrated by British caricaturist and illustrator John Leech, A Christmas Carol presents the story of Scrooge who is transformed from a greedy businessman to a more gentle, loving man after he’s visited by the ghost of his former business partner Jacob Marley and the spirits of Christmas Past, Present, and Yet to Come.

Dickens wrote A Christmas Carol during an era in history when the British were reevaluating past Holiday traditions, including Holiday caroling.

“For the past ten years (of The CENTER’s production), 33 of the world’s most beloved Christmas carols have been sung by the various characters – appropriate to their character and the drama of the scene. This year’s script and carols remain the same. Musical directors Paul and JoAnne Schubert faithfully accompany 33 traditional Christmas carols, which were researched and chosen by myself and Barbara Rankin,” says Trapani.

We’re all aware of the many ways in which 2020 defied norms. Due to an ongoing pandemic, all 28 roles in this year’s production are being played by eight actors. Rather than being played live, the accompanying music has been pre-recorded for the 2020 show.

The CENTER’s outdoor venue is just one example of the ways in which 2020’s performance deviates from seasons past. “As indoor productions are currently not allowed, the only way to perform is to perform outdoors,” adds Trapani. The cast will entertain audiences from The CENTER’s rear loading deck, which has been converted into a stage.

Creativity certainly isn’t limited to the stage or the myriad ways in which the talents behind The CENTER build sets, select costumes, act, sing, or play music. When they apply their creativity to problem solving, creative types often come up with innovation solutions, which include finding ways to perform during a pandemic.

During the summer, actors performed in the open air as the audiences watched from their seats on the lawn. “We began outdoor performances with A Midsummer Night’s Dream in July and followed with A Chorus Line in August. We then followed up with Songs for a New World and American Son in September,” says Trapani. In October, The CENTER featured five weekends of classic Universal horror films – from Dracula to Frankenstein, The Mummy, and beyond.

Between the major shows, students from The CENTER’s Kids on Stage program took the spotlight to entertain spectators and lift spirits. Dancers from The CENTER’s in-house school also dazzled audiences. In addition, several music concerts were held and other workshop presentations also helped to keep the community engaged.

“We are very, very mindful of COVID-19 and have been complimented by the county as being an exemplary model of how to obey all the rules – and then some – while conducting business,” says Trapani.

Since outdoor seating on the lawn isn’t possible during the colder days of November and December, The CENTER planned a clever “drive in” concept. “We installed a sound system that sends the sound from The CENTER’s show to an FM radio station, which audiences can tune into from their cars,” reveals Trapani.

Beyond Trapani as Ebenezer Scrooge, this year’s cast includes Andy Crispell who plays Bob Cratchit; Ellie deMann as Young and Old Alice, and Fred’s Wife; Emily DePew as Mrs. Cratchit and the Lady Bountiful; and Joe Felece who plays Marley’s Ghost and other supporting roles.

Eight-year-old Harriet Luongo will star as Tiny Tim, Boy Scrooge, and an urchin, while Lisa Lynds will play – as she has for the past 15 years – the Ghosts of Christmas Past, Present, and Yet To Come. Duane Olson will play Young Scrooge, Nephew Fred, and several other roles. Tickets are $20 per person and can be purchased via the box office or online via www.centerforperformingarts.org/whats-playing.

The CENTER, which was incorporated in 1987, operated as a summer tent theatre from 1994 to 1997. The barn-style building that houses The CENTER was completed in 1998 and began offering year-round operations in July of that year. To date, well over 300,000 guests have attended more than 1,500 productions and approximately 5,000 students have honed their skills by participating in The CENTER’s education programs. •