“To the artist, from Santa.” KK Kozik has fond memories of a childhood  punctuated by that Christmas morning when none other than venerable Saint Nick validated the sensitivity she had to form, color, and things beautiful. She had been recognized as an artist. The package contained supplies that have informed her remarkable career.

Born to parents who were both academics, KK Kozik (she’s always been called by her initials) grew up in Chester County, PA – Andrew Wyeth country with its sweeping landscapes. By the time she was in fifth grade, an interview for the Philadelphia Inquirer allowed her to establish architecture as a career goal, so when it came time for college, she enrolled at the University of Virginia, only to take an art class and have her direction become more narrowly defined.

Art. Art history. Working in the studio. Diving deep into the movements and influences that challenged and encouraged her, KK became enthralled with 19th-century painters – those who blended realism with impressionism and post-impressionism. In Degas she found rhythm and the unusual application of color. In the American landscape painters, Winslow Homer, Grant Wood, and Fairfield Porter she celebrated the fact that “modernism” had emerged.

Armed with a graduate degree from Syracuse University, it was time for KK Kozik to experience New York and its magnetic force on American art. There was but one problem. KK was not part of the “in crowd” that populated the ateliers and studios in “the City.” As inventive as she is creative, KK took matters into her own hands and realized that, temporarily shut out of the inside tracks of known galleries, she had to find her own “road less traveled.”

“I didn’t have the connections,” she recalls. “In order to get my work seen, I explored showings in alternative spaces.” These “pop-up galleries” were the rungs on the ladder that KK used to achieve awareness, recognition and, eventually, a following. “I spent 20 years moving toward acceptance and inclusion in New York galleries,” she recalls with an undercurrent of the tenacity that has moved her from unwrapping Santa’s gift under the Christmas tree to being collected, represented and recognized across the country.

The broader audience of public art

As her art evolved, KK Kozik found opportunities to make public, lasting impressions with her work. Light boxes of laminated stained glass bringing character and whimsy to New York’s Rockaway Beach subway station commissioned by the MTA’s Art for Transit program and a four floor mural in a circular stairway in the Amelio Cirio Library at Fitchburg (MA) State University are two enduring examples of her imaginative use of color and form to entertain and delight. 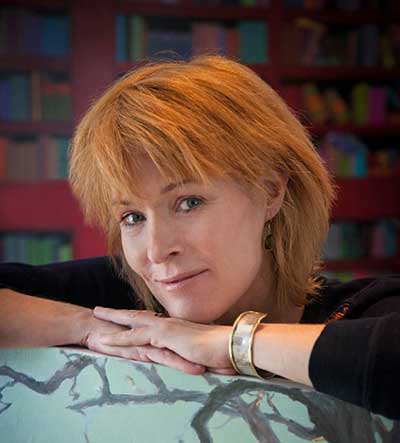 When KK is presented in solo shows at noted galleries, the commentary and reviews paint a portrait of the artist that both applauds the complexity of her work and informs the reader as to the importance of what they are experiencing. In a review published in ARTFORUM, critic Barry Schwabsky commented “…that her works stem from a mental image rather than a pictorial concept does not prevent them from finding their fulfilment in painting.” The images on linen or exotic, handmade papers reflect fantasies and recollections from KK Kozik’s mind, allowing those impressions to become painted reality. 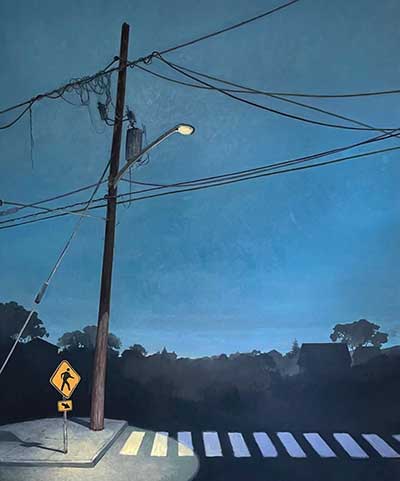 On view at the Warren Family Gallery at Berkshire School in Sheffield, MA, until March 5 is a collection of 14 of KK Kozik’s paintings presented under the banner of Time and Place. With pandemic cautions in place, access to the gallery is best made by calling (413) 229-1265 … but the call and the journey are well worth the minimal inconvenience. The landscapes created by KK are reflective of her continued artistic evolution. “I’m always pushing things in my paintings,” she reflects. “I want to discover things we haven’t seen before … to explore the dynamic between being the artist I am and accepting the challenge to change. I’m not happy doing the same old thing.”

That dedication to constantly stretching and growing has garnered attention to KK Kozik’s work throughout her career. Her paintings have been reviewed in such notable publications as Art in America, ArtNews, The New Yorker, and The New York Times.

Artist as athlete as writer

Throughout her life, KK Kozik has paralleled her prolific art career with a passion and dedication for sports. An avid skier, she’s been the president of the Northwest United Soccer Club, is a USSA certified race coach, and competed in the Ultimate Disc Co-Ed National Championships. The passion for sport runs in the family as her son is currently enrolled in a ski racing program in Vermont, even though his stated life goal is to work in biomedical engineering.

KK has served as assistant coach for the Berkshire School Ski Team and been a coach/instructor at Butternut Ski Area in Great Barrington, MA.

With her formal training in art history as well as studio art, KK has contributed articles to several publications, including COCOA, Brooklyn Rail, and this very publication – Main Street Magazine. With a profound interest in music, she’s been able to engage with and profile bands and solo performers.

Her wide experience and intellectual engagement have also led KK Kozik into the classroom at Penn State University, Hofstra University, and University of Connecticut.

Bringing it all back home

KK Kozik and her family moved to Sharon, CT, some years ago and discovered on their property an old ice house – a small building used for generations to keep ice available throughout warmer months. Often these small buildings end up a collector for garden tools and abandoned boxes of post-move curios that didn’t find a place in the main house. For KK Kozik, the space became a challenge … and an opportunity. “It’s 12 by 12 and lends itself perfectly to being a project space – a building that houses work that can only be done there … work that is conceptual and transient.” And with that revelation, ICEHOUSE Project Space became a reality.

“Artists, especially regional artists don’t have a huge art-going public to support them,” she establishes as the premise for the project. “We want these artists to have a space they can inhabit with their work and, then, invite people to come for the experience.” To date, ten projects have been hosted on KK Kozik’s Upper Main street property, ranging from Dan Devine’s Inside Out NASCAR which featured a fully deconstructed, drivable NASCAR racer reconstructed into a piece of sculpture to Fire and Ice by Stephen Maine in which the artist created a huge mural covering the internal walls for the ice house and culminated in cutting up the mural into manageable paintings which were sold.

“The beauty of this unique space and the wildly divergent projects is that we’re getting some interesting press coverage for the artists and their work. I’m not an art dealer, merely an artist with the space and energy to support these wide ranging talents.”

Wide ranging talent. That sums up the life and work of KK Kozik.

“Time and Place” is on display at The Warren Family Gallery at The Berkshire School until March 5. Call (413) 229-1265 to set a viewing appointment. KK Kozik’s work can be further explored on her website, k2kozik.com 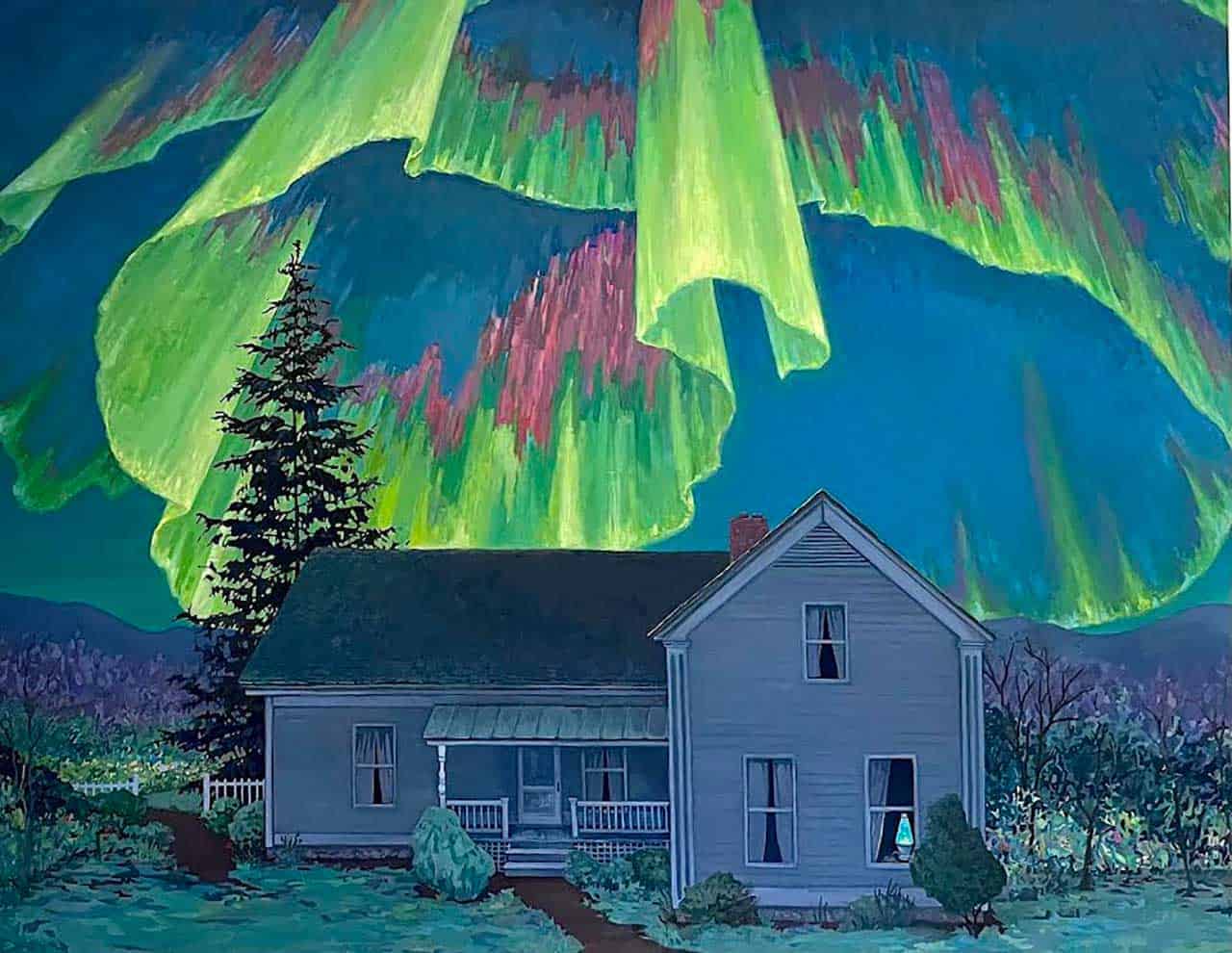