Mention designer Matthew Patrick Smyth and one conjures tasteful rooms, beautiful fabrics, well-curated furniture and antiques and, most of all, comfort. A place to call home. Smyth has had his own business for over 30 years and he is still one of the most sought-after interior designers.

Smyth did not start out to be a decorator. The oldest of five children, he started out as a theater major, switched to business, and still did not feel that he had found his true calling.

“I was frustrated about not being able to settle on a career,” Smyth recalls. “Then one evening I was at a dinner party in Stone Ridge, NY, and at the table was an antique dealer who started talking about a designer he had met recently. He talked about the man’s house and his business and the world of interior design. David Easton was the designer he was talking about. So I did some research, saw some of his work, and decided that perhaps this could be my field of interest.”

Smyth decided he would apply to the Fashion Institute of Technology (FIT) and study interior design. However, to be considered for admission one had to present a portfolio, which he really didn’t have.

“I went home and took some photographs, did a few drawings and pulled together something to bring to FIT,” says Smyth. “Everyone’s portfolios were laid out and when they came to mine they said it was weak but there was something in my photographs they liked, so they gave me a chance. I was finally focused and knew this was what I wanted to do.”

Smyth found work but still dreamed of working for David Easton and one day received a call that there was about to be an opening on his staff. Smyth ran home, changed his clothes, hightailed it to Easton’s office and got the job.

He worked for Easton for five years and credits him for teaching him how to see the intrinsic value of any given piece and to successfully mix furnishings with similar lines, materials, and forms even when they are products of different centuries. Easton also instilled in Smyth a love for travel.

“David traveled extensively and thought it was important to experience a place and not just read about it,” says Smyth.

Stepping out on his own

In 1987 Smyth started his own design firm and has been in demand ever since.

His classic style and impeccable attention to detail are hallmarks of his work. His comfortable, timeless rooms are tailored to fit his clients’ personalities and lifestyles, whether they are dynamic young couples with children or cultured art collectors. He masterfully blends contemporary pieces with antiques to endow each space with a sense of solidity and history while maintaining a completely fresh, modern sensibility.

Recently there have been two major events in Smyth’s life. First, his new book Through a Designer’s Eye: A Focus on Interiors was published by Monacelli Press in September. His previous book Living Traditions: Interiors focused on design tips and approaches to design and featured several of Smyth’s wide range of projects. This new volume presents his more recent work, ranging from a traditional Park Avenue apartment and an edgy Tribeca loft in Manhattan to waterfront houses in Florida, New England, and Long Island. Making this even more special is the fact that Smyth took many of the photographs himself.

“I put the camera down 20 years ago and had not picked it up since,” Smyth says. “With the popularity and importance of Instagram, I started shooting again and became inspired to include some of my own pictures in this new book.”

Another special component of Through a Designer’s Eye is that it includes Smyth’s own house, which he bought less than a year ago and completed renovated.

“I had an 1890s house in Sharon, CT, and was very happy there,” he explains. “But I was always looking at real estate ads and there was one house in Salisbury, CT, I was attracted to, but thought the asking price was more than it was worth. It was a 70s ranch house and I thought I could turn it into something I would like. One Saturday I saw that the price had dropped significantly and learned that it was now an estate sale. So I went over that morning and bought it that afternoon. I wasn’t sure I was going to live there once I did the renovations. I just thought it would be a fun project. I took down all the walls and sheetrock to see exactly what needed to be done.”

Smyth started designing the house on the fly and by March he had made a decision – he wanted to live there. By August the house was ready for him.

Quite a drastic change. And he couldn’t be happier. During the pandemic he has been able to spend more time in his new home.

“I love the location. I’ve always lived in villages, so this has been a very different experience. I had an old house and I loved it, but life is easier in this newer one. Being here during the spring and summer I’ve been able to fully enjoy country life.”

Smyth’s new home is featured in Through the Designer’s Eye and it is easy to see why Smyth loves living there. He writes in the chapter called Changing Scenery:

“Someone asked if I was going to do the rooms entirely in mid-century modern or maybe use only pieces from the 1970s. That would have been too obvious a solution.”

Instead he employed his genius of combining pieces from other periods and places, collected over a number of years. The juxtaposition of furniture and objects is stunning and a tribute to Smyth’s keen eye and brilliance. He is a very happy man in his new home and hopefully will be there for a long time. 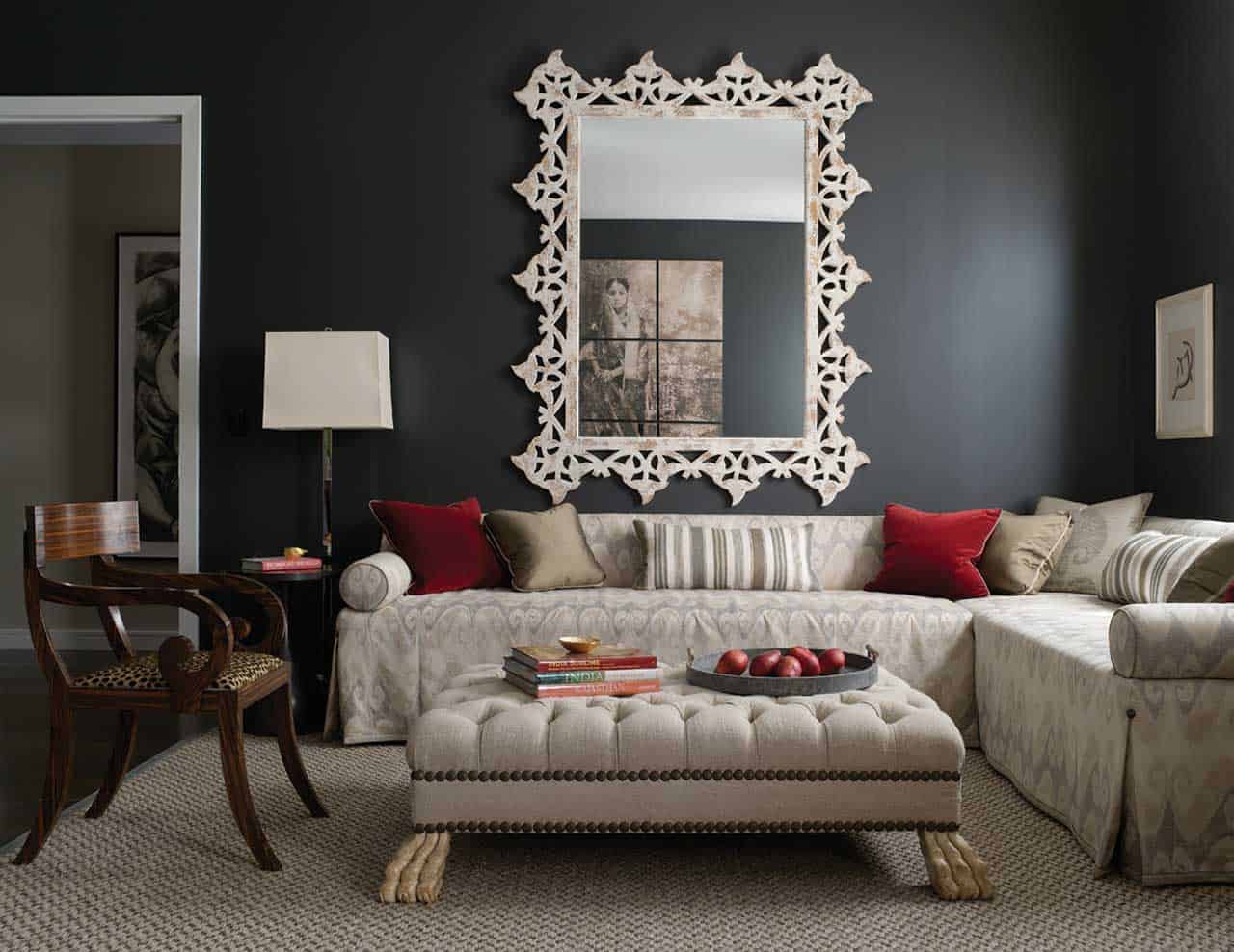 To learn more about Matthew Smyth and his designs, you can visit him online at www.matthewsmyth.com.