Is this the best chocolate cake you’ll ever have?

Today is my birthday. Yes, yes, it is. The sun is out, it’s a glorious day, and it feels like Sunday. But it’s Monday. But now a days what day of the week it is doesn’t really matter. Instead we now count what quarantine day it is. Well, this quarantine day is also my birth-day and my family and I had a little dinner last night in honor of it. We decided to have a birthday dinner around lunchtime and the one big problem was, “We don’t have a cake!” There was no last minute-save our butts with cake mix from the pantry – even! So I said to my husband that I’d just find a recipe and make a cake from scratch. No big deal!

My husband didn’t want me having to make my own birthday cake, aww thanks! But I don’t really care and I didn’t mind. He took the kids outside to play and I spent the next hour (or two) making a chocolate cake that hails the title “The Best Chocolate Cake” on Pinterest – well that’s a proclamation if I’ve ever seen one. This thing better be good!

So after reading the recipe a time or two and making sure I had everything I’d need, I began. The first step was to mix the sugar, brown sugar, cocoa powder, baking soda, and salt. After that I added boiling water to the mixture, mixed it, and let it sit for five minutes. Apparently the heat from the water brings out a more intense chocolate flavor from the cocoa. Alright, I was willing to try.

While the five minutes were underway, I greased my two pans and preheated the oven. Then I moved onto the next step, which was to blend in the vegetable oil and butter. I was then supposed to add the eggs and egg yolks and vanilla extract after the oil and butter – but I forgot that part and just added the oil, butter, eggs, and vanilla all at once. Whoops. But I have to take a step back for a minute. So the recipe called for 2 whole eggs and 3 egg yolks. I’m not the best egg-cracker, but lucky for me, I remembered that I have one of those egg-separator tools … you know, the one that people like me use once every three years. So I got two bowls out, one to collect the egg whites and then one for all of the eggs for the cake. I carefully cracked my first egg, put it in the separator gadget and voila! I separated the yolk from the egg white. Wow, look at me – I’m semi-pro now.

Alright, so moving on. The next step was to: add the flour, mix, add the milk, mix, add the sour cream, and mix. I then poured the liquid-y chocolate into my two pans and put them in the oven. Within 20 minutes the whole house smelled like delicious chocolate. Yummy! The recipe says to bake it for 28-33 minutes, I baked mine for closer to 40 – I think it’s just my oven. I let the cake bottoms stand for five minutes before taking them out of the pans and letting cool on the wire rack.

I then began to make my chocolate buttercream frosting. This was a first for me, and holy butter! No wonder it’s called buttercream frosting – it’s essentially just butter and sugar. You need to whip the butter until it’s nice and fluffy, then I sifted in the powdered sugar and cocoa powder and mixed it a little. I then added the heavy cream and vanilla extract, although I kind of eyeballed those two.

I got my fancy frosting tool out, as well as my glass pedestal cake dish – oh yes, I was feeling fancy. I should have let the cake bottoms cool a little more because my icing started melting a little in spots, but in the end that helped to spread the buttercream icing better. I just had to be careful not to have the icing rip the cake. But boy did the cake smelled great. It looked pretty good too – even if I do say so myself. It would have been ideal to serve it with some whipped cream, but considering the butter in the cake and icing, I thought I’d skip it… this time. After the “Happy Birthday” song ended, I cut into the cake and it really looked so good. I was pretty proud.

But how did it taste?

Incredible! It’s definitely the top three chocolate cakes that I’ve ever had. Not just that I’ve made, but that I’ve tried. So perhaps it does live up to the title! But start to finish, it was about a 2 hour adventure and it was well-worth the work.

To see the full recipe you can click here 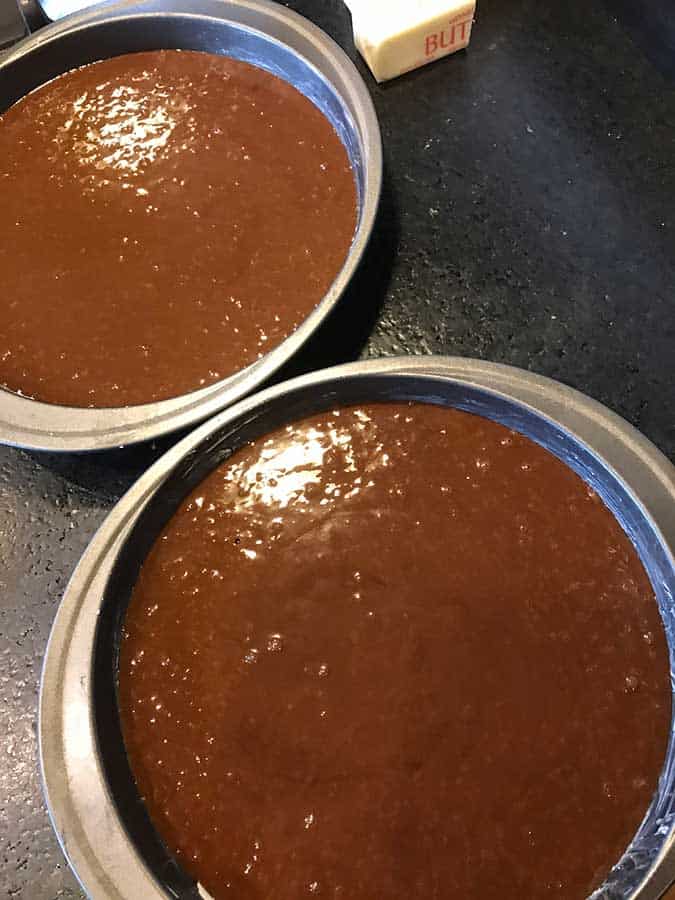 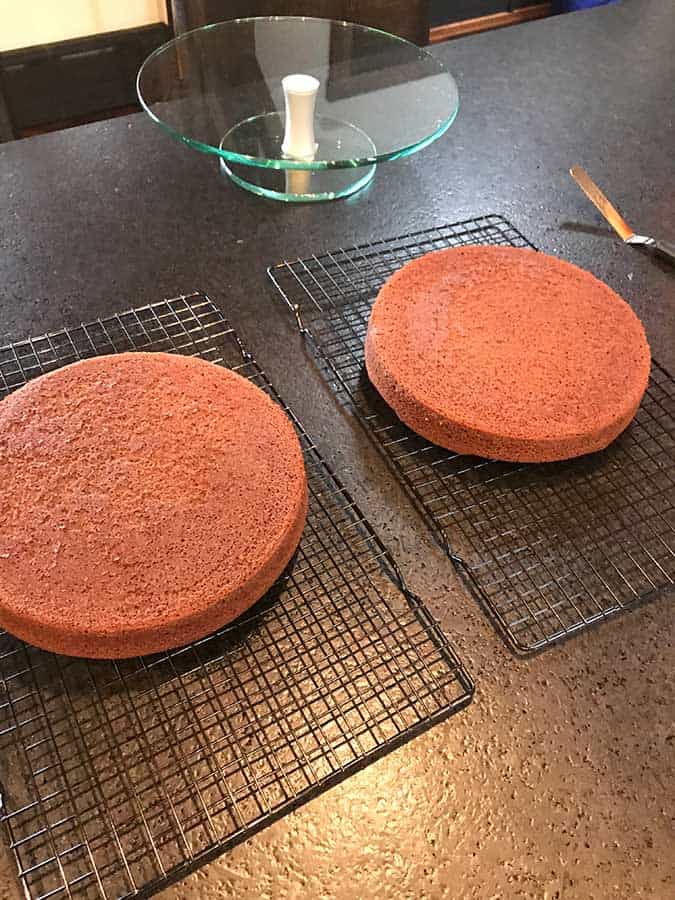 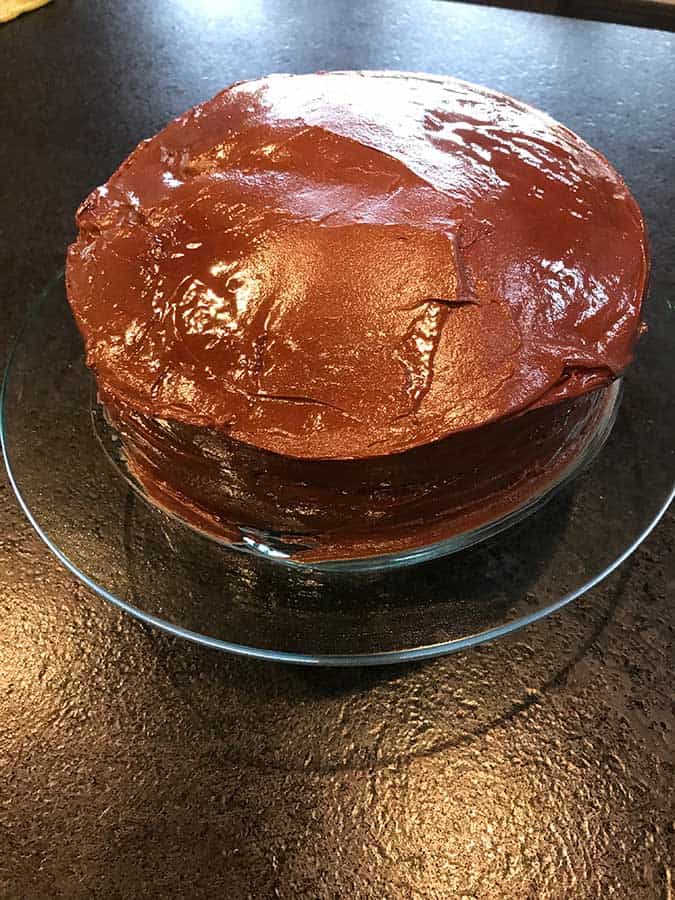 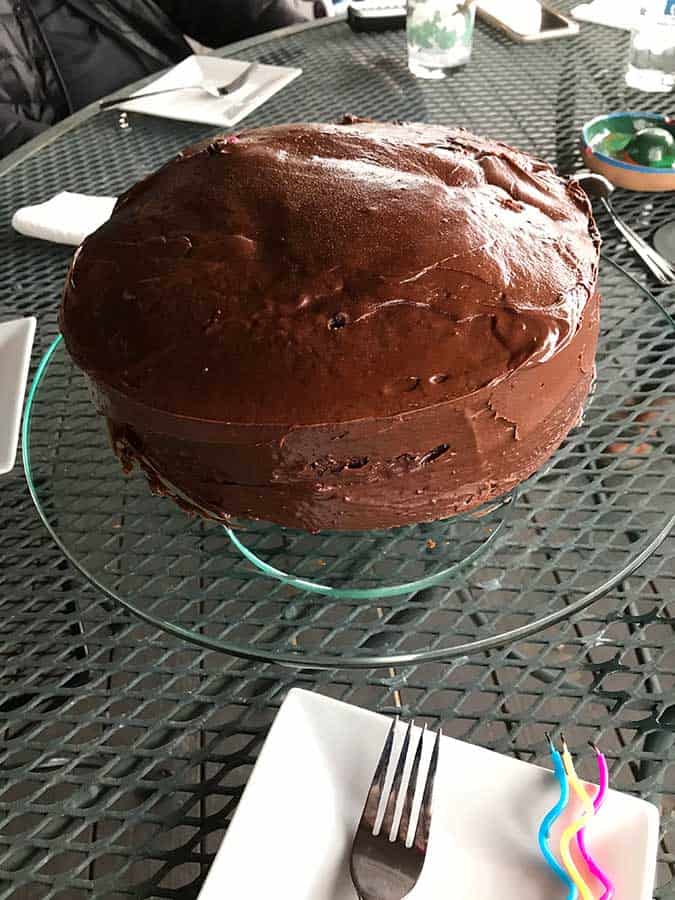