Jackson’s: The finest BBQ in the Hudson Valley?

There’s a new BBQ joint in the Hudson Valley. Claverack, NY, to be more precise. For those of us who grew up with the Eskimo Bar at the intersection of Route 23 and 9H, the day that the Eskimo Bar closed down was a sad one. It was to my great surprise that I learned just last week that it is under new ownership – it has been brought back to life as a BBQ spot – WITH ice cream. They call themselves Jackson’s, BBQ, Burgers, Beer and Ice Cream, – not a bad combo of offerings if you ask me.

My parents were the ones who told me that it was open, and that they had checked it out on a Friday night. I opted to give it a try, the following day, on Saturday evening. I promptly checked out their menu online, which showed a pretty decent offering with the BBQ staples that one would expect and want to see. What took me by surprise (in a great way) was to see that they source their ingredients locally. Their meats are from local farms, as are their cheeses, and a few other items. I’m all for the “shop local / eat local” ideology so I loved seeing this.

After I checked out their online menu, I proceeded to try to order through it, which unfortunately didn’t go as I had hoped (maybe it was my phone or bad service?). But that wasn’t a biggy – I just picked up the phone and called in the order.

I ordered the House-Made Beef and Pork Sausage which consisted of grass-fed sausage from Dirty Dog Farm; Pasture-Raised BBQ Pulled Pork with the St. Louis sauce (I ordered a half pound but you can also get a full pound); the chicken which is smoked and pasture-raised (I got a half chicken but you can get a whole chicken); and for my sides I ordered the mac and cheese with some sort of “ends,” potato salad, and coleslaw. And of course I had to make sure that the ice cream was OK, so a small soft-serve vanilla in a cup with rainbow sprinkles for the 3-year-old and me to share on the drive home.

They told me once I finished placing my order that it would take about 15-20 minutes, but within 5 minutes I got a text message letting me know that my order was ready. Talk about quick!

As I rounded the corner and approached Jackson’s, the parking lot was full. But it wasn’t a big deal, I just did a U-ie and promptly found a parking spot. The building has been painted and the place has been spruced up, and it looks really nice. As you approach, there is a clear line for ordering and for pickup. I had barely gotten to the socially-distanced pickup line when they called me order number, I approached and got my order. I was in and out of there in less than 2 minutes. As soon as I placed the BBQ in my car, the smell – OMG! A crazy-good BBQ aroma filled the car, and I had to smell it for the 25-minute drive home.

Curbside pickup and “dining out at home” is now the new norm, so of course my BBQ was in take-away boxes, it traveled well and looked pretty good after the 25-minute drive, and definitely smelled incredible. I tried a bite of everything but the sausages, and it was really great BBQ. It was tremendously fresh and tasty. And I have to tell you that I was happily surprised to see their price point based on the fact that they source so many of their ingredients locally and under the umbrella of grass-fed. Their portions are very generous, and you’ve got choices when it comes to quantity, sauces, and sides. I’m excited to go back and try their brisket and more of their sides, and get another ice cream! 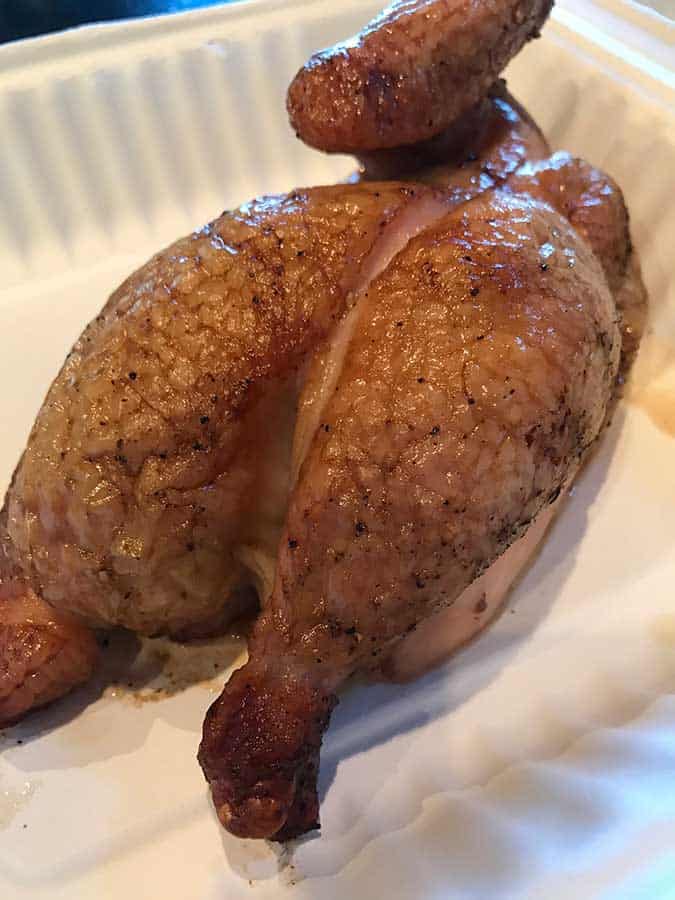 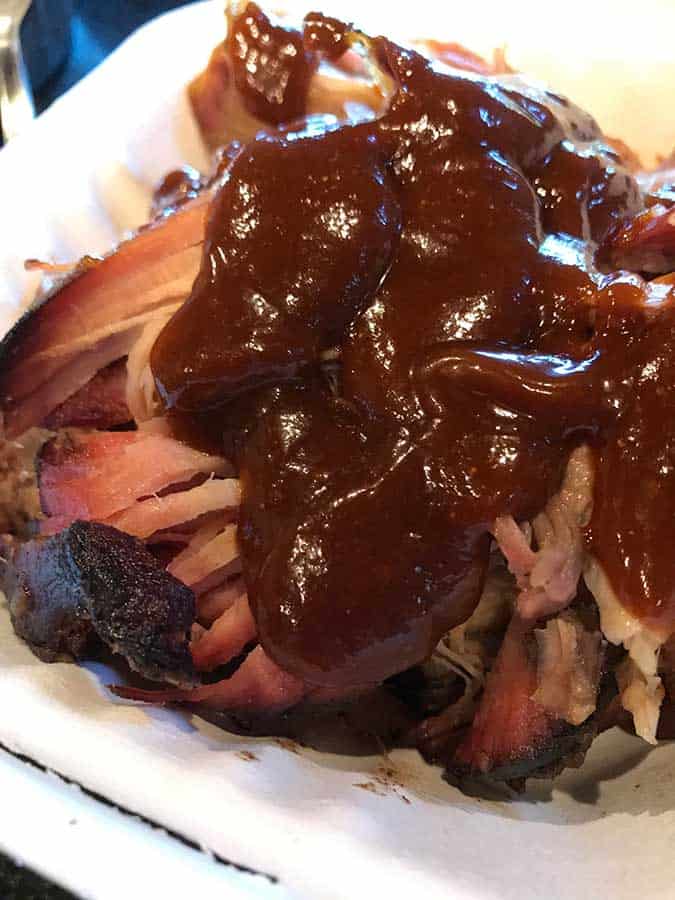 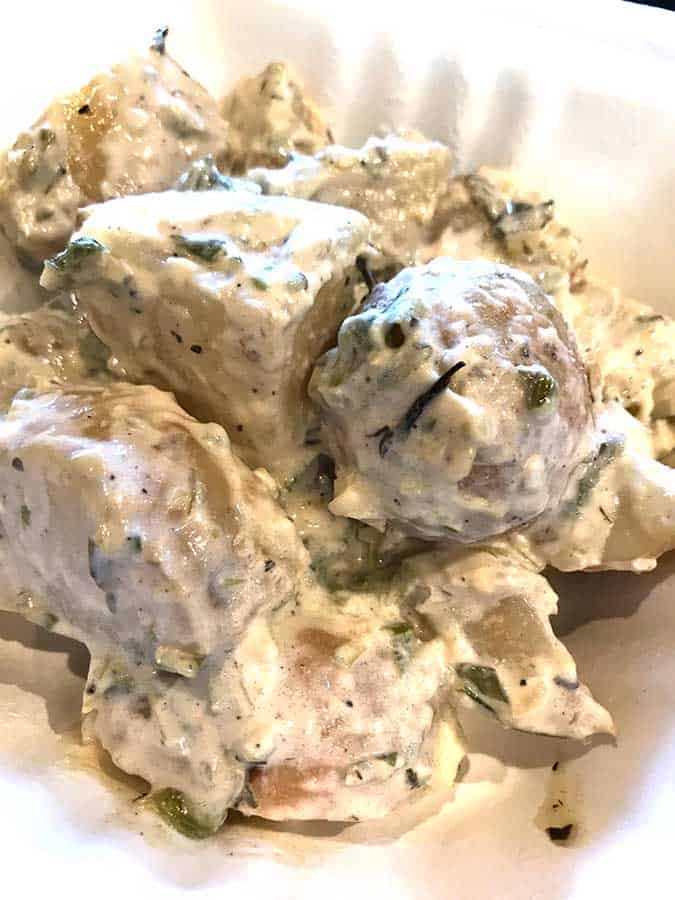 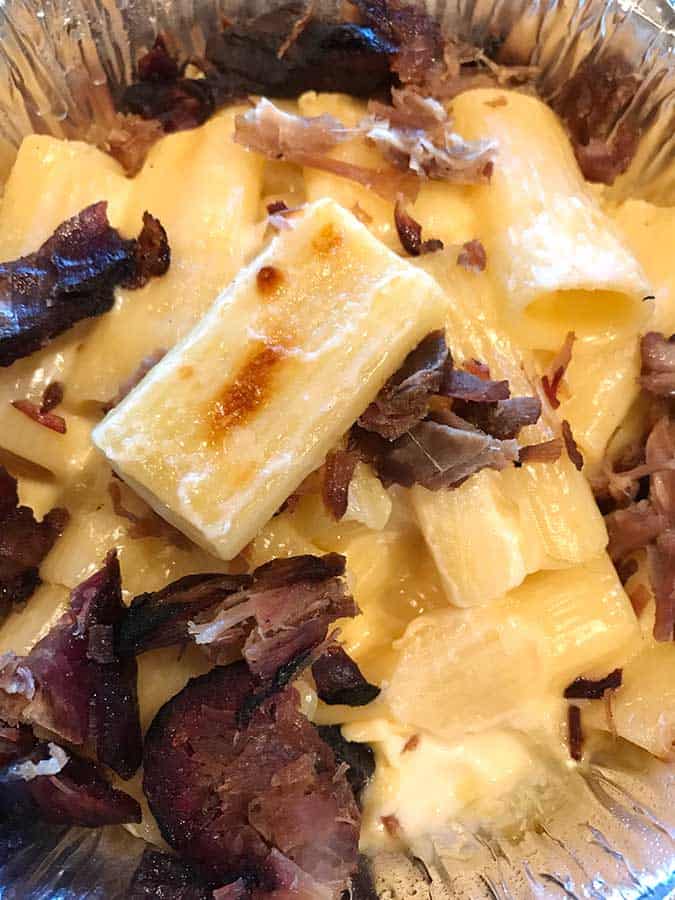