After spending over a decade in various culinary roles in the Hudson Valley and beyond, Mark Fredette unveiled Iron & Grass – a family-owned “chophouse” in Hudson, NY. The local farm-to-table restaurant and bar opened its doors in August 2021.

“We call it a ‘chophouse’ because ‘steakhouses’ focus on beef,” says Fredette, chef and owner of Iron & Grass. His new chophouse focuses on sustainable agriculture and regenerative farming. Most of its meat is locally sourced from animals that are pasture-raised and grass fed. Beyond its menu of steak, pork chops, and vegetables, Iron & Grass also offers seafood that is sustainably harvested.

For as long as Fredette can recall, he’s yearned to be a chef. “I’ve always wanted to be a chef – I’ve only pursued the culinary arts as a field,” says the graduate of The Culinary Institute of America in Hyde Park.

After graduation, this shining star went to work at The Artist‘s Palate in Poughkeepsie, NY, (the restaurant closed its doors in 2020 and is in the process of being sold). “At the time, the Fells (proprietors) were pioneers in the region. The Artist’s Palate became known as a culinary destination. They were the first farm-to-table fine dining spot in the Poughkeepsie area,” he adds.

A former job in the now defunct non-profit dairy farm, Sprout Creek Farm also shaped Fredette’s perspective. “When I took the position at Sprout Creek Farm, I began to understand the effect farming has on land stewardship and I learned about regenerative farming. What I learned there really cemented my principles,” says Fredette.

Beyond working locally, Fredette worked in Boston, New Orleans, and Alaska. While at Bricco in Boston, he trained under Italian chef Marisa Iocco. “She is a respected chef and is ahead of her time,” says Fredette.

In New Orleans, the culinary enthusiast worked at Red Fish Grill – a 500-seat restaurant on Bourbon Street. Fredette also served as assistant chef on CruiseWest, a small cruise line that is no longer in operation.

“It had a maximum of 85 passengers. Being on a small cruise line was a very different experience than being on a mega boat. It was very intimate and so was my experience in Alaska,” said Fredette. He explained that since the boat didn’t have much storage space, a barge delivered the food a few weeks ahead of time.

Prior to opening Iron & Grass, Fredette was the chef/owner at Clermont Café, which was located next to Tousey Winery in Germantown, NY. It grew quickly and Fredette soon needed a larger space. That’s when he and his wife Gabrielle decided to open Iron & Grass. “I’ve lived the in Hudson Valley for 13 years. We love the area and are happy to be raising our two sons here. We like being part of the community,” says Fredette.

Before the farm-to-table movement even began, Fredette thought it made sense to purchase produce from neighboring farms. “It just made sense to me to shop local and support my neighbors. I remember trying to buy directly from local farmers and they would tell me to order from their distributors,” admits Fredette.

As a result, he shopped local farmstands.

Fredette channeled that philosophy into the way he manages and makes decisions for Iron & Grass – a 99-seat restaurant located on 12 acres of flatland. A family affair, Gabrielle manages the finances and accounting.

A chophouse was certainly on Fredette’s wish list. “I really enjoy the craftsmanship of butchery,” he shared. With sustainability in mind, he explains that between 400 and 500 pounds of meat can be sourced from one cow, but generally only 50 to 100 pounds are used for rib eye and porterhouse steaks. Farms can’t keep up with the demand for these popular cuts.

Most of the remaining meat on the cow is sold as chuck, sirloin, and ground beef, but the farmers can’t make a living selling that inexpen- sively in retail markets. They have to feed their families too,” explained Fredette. An experienced butcher can extract quality steaks from these same primals.

Beyond offering rib eye and porterhouse, Fredette offers other cuts. He strives to purchase as much of this meat as he can from local farms. “We take time to remove the connective tissue and I use my craftsmanship to extricate these cuts,” explained Fredette who also mentioned other cuts of steak such as the Denver Steak (a well-marbled tender shoulder steak that is gaining popularity); Tri-Tip (a flavor-packed triangular steak from the bottom sirloin); and Coulotte (a tender, fatty meat).

“Our steaks are generally between $28 and $145 for a 28-ounce Bison Tomahawk from Fossil Farms in Boonton, NJ. We try to offer a range of prices and strive to be an every day restaurant that supports local farmers,” says Fredette. 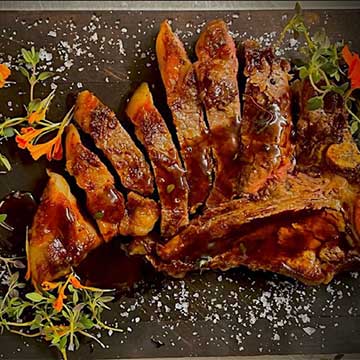 Iron & Grass offers entrées as well as an à la carte menu, which means that each steak is sold separately from the side dishes. Every steak on the menu includes the name of the farm that the meat came from. Some of the suppliers include Letterbox Farm Collective and Meisner’s Heritage Farm, both in Columbia County as well as Common Hands Farm in Hillsdale and MX Morningstar Farm in Hudson.

The menu’s steak and chops include a 12-ounce Denver Steak from Hardwick Beef in Vermont and a 12-ounce Boneless New York Striploin from Grimaldi Farm Store in Ghent. It is certified organic. Fredette also purchases steaks from Gulden Farm and Dirty Dog Farm, both in Germantown. The pork hails from Raven & Boar Farm in East Chatham.

Fredette mentions the Local Burger as a great option. The meat comes from Dirty Dog Farm. The burger is made with grass-finished beef and is served on a house-made roll. It contains cheese from McGrath Cheese Company as well as house made onion jam and ketchup served with crispy smashed potatoes. A meatless option is available.

Iron & Grass also offers seafood and gluten-free options. Among the entrées is the Marrow Shrimp Risotto. It boasts shrimp from the Alabama Gulf, arborio rice, and cheese from McGrath.

As for appetizers, one of Iron & Grass’s standouts is Buffalo Cheese Curds, which are made from cheese that hails from McGrath Cheese Company. This snack is also made with buffalo powder and crispy broccoli leaf. “This is my favorite nostalgia piece,” admits Fredette, who worked with Colin McGrath at Sprout Creek.

For starters, Iron & Grass also offers Strawberries & Cheese, which is made with mint from Greig Farm, McGrath Victoria cheese, and Harvest Spirits double balsamic. Other appetizers may include charred broccoli with lemon salt and olive oil – or asparagus sourced from Greig Farm. These are drizzled with extra virgin olive oil and sprinkled with salt, pepper, and a splash of lemon. There’s also the Forbidden Black Rice, which is prepared with extra virgin olive oil, shallots, and a sprinkle of sea salt.

“I’m a scotch and bourbon guy, so I make an Old Fashioned that changes with the seasons,” says Fredette. Iron & Grass recently offered an apricot-flavored variety, thanks to a great crop out of California. During the summer, Fredette usually purchases small batch rum from the Caribbean. A menu of summery Mojitos follows.

Beyond the scotch, tequila, and rums, which come from the regions of the world that authentically produce these spirits, Fredette brings in local spirits such as Black Dirt Distillery in Warwick, Taconic Distillery in Stanfordville, Albany Distilling Company in Albany, Arrowood Farms in Accord, and Harvest Spirits in Valatie, to name a few.

Since summer is blueberry season, Iron & Grass offers a Mojito made with simple syrup and blueberry mint. They also make a mango jalapeño margarita with a smoky mezcal flavor.

“I’m passionate about it. I don’t think chefs should buy processed food and products. People can go to the store and get the bottled stuff. At times there are reasons to, but I try to make it all here. In my opinion, everything should be crafted – it’s part of being a chef,” says Fredette.

Iron & Grass’s cocktails are crafted with local ingredients and Boylan soda. When they whip up margaritas, everything is made in-house. Finally, Iron & Grass has a full wine list, and has local wine from Tousey Winery.

The ambience at Iron & Grass is described as minimalist and a bit modern. There’s an exposed ceiling and exposed rafters as well as touches of corrugated steel. A pleasant outdoor patio offers views of the Catskills. It’s a perfect place to catch a sunset with a spirit in hand.

Vegans, vegetarians, and those who are gluten-free will also feel comfortable dining at Iron & Grass. “If a group comes in, we don’t want someone who is gluten-free, vegan, or vegetarian to feel like they’re inconveniencing us. We’re in the hospitality industry and we’re here to serve people,” concludes Fredette. The restaurant has many vegetarian, vegan options, and gluten-free items.

A party space and private dining area are available for tastings. At press time, Fredette was planning tastings and Meet the Grower events. Stay tuned.

Another perk to Iron & Grass is The Conery – a seasonal ice cream shop on the premises. It sells Jane’s Ice Cream, which is also locally made. House-made waffle cones are made daily and The Conery also sell milkshakes and sundaes made with local fresh ingredients. A large playground is another hot destination on the property for families to enjoy some time together. •

To learn more about Iron & Grass, they are located at 3521 US 9, Hudson, NY. You can call them at (518) 751-9908, or visit them online at www.ironandgrass.com. All images with this article depict the food of Iron & Grass and are courtesy of Mark Fredette. 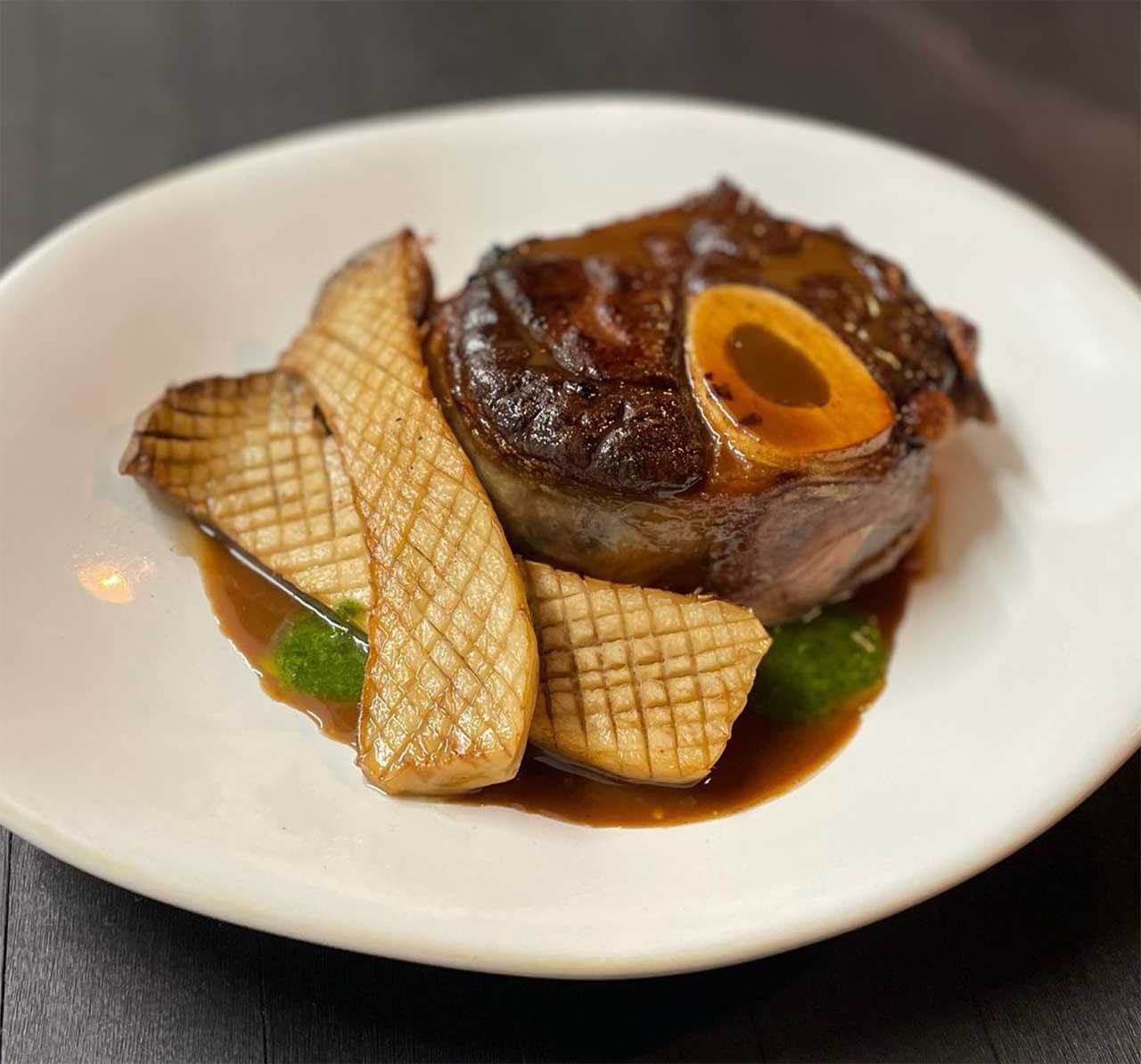