Keeps Me Out of Jail 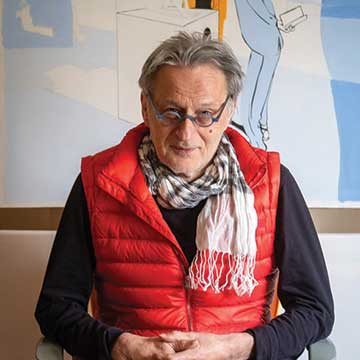 First impressions often do not lie. Meeting Istvan Banyai, a celebrated artist, animator, and designer who has chosen to live in the bucolic setting of Lakeville, CT, one is immediately impressed with the fact that in a very elegant “European” way, Istvan is a gentleman.

There is a grace about his movement, a softness in his voice when he speaks, and a spark in his eye that is hypnotic. When he makes a comment, answers a question, overlays a studied opinion on a conversation, there is not even a wisp of anything less than an engaging courtliness that underscores the sense that what he is saying … what he is doing … is important.

And, so it should be. From childhood in Hungary and his graduation from Moholy-Nagy University of Art and Design through a transit that took him to Paris and the influences of the French modernist illustrators and artists to Hollywood, where his illustration style caught the imagination of the film industry and solidified a significant career, Istvan Banyai has neatly blended an incisive world view with artistic brilliance.

The list of credits and global awards stretches across his website (www.Ist-One.com) punctuated with opportunities to move tangentially into the worlds of The Atlantic Monthly, The Los Angeles Times, The Boston Globe, Rolling Stone, Fortune, The Wall Street Journal, Playboy, Mother Jones, The New York Times, The Washington Post, and The New Yorker.

Banyai’s The New Yorker covers present an elegance, a subtlety, and an unrelenting focus that cannot be ignored. “Tis The Season,” the cover of the December 9, 2013 magazine pulls us onto the streets of New York and the sidewalk in front of McSorley’s Old Ale House where a lone figure huddles in the corner, playing his muted trumpet. From the presumed warmth of the ale house, a young lady looks out onto the street. A string of lights and a draped “Merry Christmas” sign adorn the front of the building, a fixture on 7th Street for over 150 years.

But there – next to the trash can on the street – is a present wrapped in white with a red bow intact. For whom? Why? Was it lost, dropped by mistake, or left by design? Will the trumpeter finish his song, step inside, and offer the present to the young lady? Banyai requires that the viewer decide while, as the artist, he moves away from the scene, letting it stare back from newsstands and the collected daily mail to engage and haunt.

Humor, with an edge

It is the sense of humor, wrapped in such startling talent that makes Banyai’s work both timeless and timely. A Banyai illustration for The Atlantic in June of 2009 presents “Mother Earth,” not as a remote object but as the silhouette of a young woman, pregnant with the globe. Elegance and an edge – that is a Banyai signature view.

Delayering the personality and the perspective of the artist is not a simple task. Nestled on his website is a description of his work, which should carry a warning that it is not for the faint of heart. “My work is an organic combination of turn-of-the-century Viennese Retro, inter absurdity added for flavor, served on a cartoon-style color palette … But absolutely no social realism added.”

A second or third reading will do little to untangle the Gordian Knot he has presented. It is only when viewing his body of work that one can appreciate the complexity of the creative spirit and the razor-sharp insight and wit that permeates most every piece. “Inflation,” another piece done for The Atlantic in 2005 ties all of the disparate components together in one succinct view of how the simple postage stamp reflects culture and commerce.

Not always what they seem

When, in 2013, The Norman Rockwell Museum invited Banyai to participate in their “Distinguished Illustrator Series,” chief curator for the museum, Stephanie Plunkett summed up the invitation asserting that Istvan’s work “conveys an air of quiet mystery, and his absorbing illustrations inspire more questions than answers, a reminder that things are not always what they seem.”

In what may be its most consumable iteration of Istvan’s assertion that things are not always what they seem, four children’s books have come from the imagination and skill of the storyteller/illustrator. Beginning in 1995 with Zoom, which begins with a detailed image and continues, page on page, to move further and further back until the viewer stands at the edge of the universe with a view of the world, Banyai has created four books that entertain, inform, challenge, amuse, and cry out for frequent visits. Re-Zoom followed, as did The Other Side, and R.E.M.

So visually intriguing are these books and so richly illustrated that animating them, which played so beautifully into Banyai’s career as an animator, became imperative. The cable outlet Nickelodeon, long a favorite of children and their parents who have enjoyed the challenges and stimulation of the programming, incorporated the animations of Banyai’s work in their regular broadcast rotation.

Again the notes from his appearance at The Norman Rockwell Museum captured the importance and impact of his books, by affirming their “unexpected perspectives have made him one of the most original and iconoclastic illustrators today.”

The vision goes on

Although his career has stretched over continents and decades, Istvan Banyai is far from finished in his artistic pursuits. Things catch his eye. Human moments pique his interest and he responds in the way a true artist mirrors life – in a drawing, a sketch, a graphic moment that captures the truth, and the irony of life. In his own self-evaluation, Banyai affirms that his curiosity and imaginative response “works as therapy and keeps me out of jail!”
Incarceration is a highly unlikely response to Banyai’s work, which can be acquired in many forms, not the least of which is through high quality reprints of his The New Yorker covers. His children’s books are easily available on the ever-present Amazon website and viewing the animations of his books on YouTube is a fine way of engaging with each piece and understanding the delicate illustrative presentations that take the viewer on flights of fantasy.

In reflection, Istvan Banzai has been rightfully called many things based on his capacity to express in spare, but engaging work the world around him. One term that stands out, however, appears in the author description for one of his children’s books. He is identified as artist and illustrator, but also “provocateur.”

Too simple a definition of the term is “one who provokes.” It is only digging deeper into the expansion of the Merriam-Webster definition that more insightful words appear, each of which could be comfortably applied to the rich body of work already created by Istvan Banyai. “Agitator … exciter … firebrand … kindler … instigator.”

It was the end of summer edition of The New Yorker – August 31, 2009. The image on the cover, was, at first glance, a romantic farewell to the season.

An athletic male carries his wiling partner into the water toward a perfect moon. A midnight swim? Impending laughter, splashing, and bidding farewell to the beach as vacation is about to end?

All conjectures seem so logical until Banyai draws our attention to the hastily prepared sign, stuck into the sand near a grassy dune. “No Trespassing!” And, suddenly, there is much more than meets the eye.

Exploring Istvan Banyai’s website will open up several windows and doors that lead down hallways and alleys that each is worth exploring. www.ist-one.com.

Are you an artist and interested in being featured in Main Street Magazine? Send a brief bio, artist’s statement, and a link to your work to info@mainstreetmag.com.