Let me roast your chicken and scallop those ‘tatos

I’ve had a busy couple of weeks in the kitchen … I never thought I’d be saying those words! But it even got to the point that I said to my husband, “Maybe I should write a cookbook called ‘My Quarantine Cookbook’?” Perhaps not a horrible idea, since I think I’ve stumbled upon some great tips as well as some fun and tasty recipes.

On Easter Sunday I decided to keep it simple and healthy and roast a whole chicken and scallop some potatoes. I had attempted au gratin potatoes some weeks back, and they were really delicious – but they were a bit oily and heavy due to the cheese and sour cream and and and… This time I found a much simpler recipe for scalloped potatoes that I was excited to try.

I mastered the chicken roasting some years ago, and for me it is about four things: a great chicken (organic preferably), plenty of herbs (I don’t use salt-based spices) to cover the chicken in, putting about ¼-1/3 stick of butter atop the chicken when it first goes in the oven, and then spooning the juice over the whole chicken about every 15-20 mins to keep it moist (which I usually begin doing after I lower the temp to 350). When I first put the chicken in, I had the temp a little high, around 400, but about half hour in I lowered it to 350. I recommend you check the cooking instructions on your chicken, but the general chicken roasting rule of thumb is to preheat oven at 450 and put chicken in for 10-15 mins, then lower temp to  350 and roast 20 mins per pound.

I roasted my chicken a bit longer than the recommended time (because I screwed my timing up with the potatoes), but I just made sure to keep spooning that juice over it to keep it moist. Due to staying in the oven a bit longer, my spices turned darker atop the chicken, but honestly it just adds flavor. It may not be the prettiest thing to look at, but it just makes the chicken more flavorful.

As for my scalloped potatoes, I turned to Pinterest. I found “Mom’s Homemade Scalloped Potatoes” by The Life Jolie (link below) and they looked great and also seemed to be fairly healthy. I got my potatoes out and peeled them with the peeler, and then I began to peel the actual potatoes instead of thinly cutting them. The recipe does instruct you to cut them pretty thin, but I was getting carried away with the peeler. Maybe there’s such a thing as too thin? About six potatoes in I reconsidered this, and began to thinly cut them.

The tips that The Life Jolie give you at the start of the article were really helpful: cut the potatoes as thin as possible, slice the onions thin as well because that way they’ll melt right into the dish, bake uncovered so that they get nice and golden brown on top, etc. These tips helped to explain the reasoning for doing certain things, which I always appreciate, but furthermore, that is how I’m able to learn and grow as a chef/baker – by understanding the “why” of why I need to do things a certain way.

When I had all of my potatoes cut, I lined the bottom of my sprayed dish with them and yes I had some overlap. I then sprinkled my onions and spices, I then added another layer of potatoes and sprinkled more onions and spices – and I repeated this until the top layer where I poured the milk/flour mixture on top. I then topped the potatoes with a light sprinkling of cheese. In the oven it went and cooked for just over an hour.

While I was waiting for the potatoes to finish, I realized I needed gravy. I turned to my friend Google and found a simple chicken gravy recipe that went something like this: melt butter; whisk flour in with it; add chicken broth and whisk and repeat a few timesto thicken the gravy; add a little spice/herbs; whisk frequently until it’s gravy. Honesty moment: chicken gravy always looks weird to me. It’s that light brown color and it just never feels like gravy to me. I feel that gravy needs to be either dark brown or light colored. This light brown gravy thing is always weird for me – however, although it wasn’t much to look at (in my opinion) it was delicious!

The results were pretty delicious – all around. My only objection was in the scalloped potatoes; the amount of pepper they advise in the recipe was a tad too much. We’re not a big pepper household, so next time I’ll be sure to be careful with the pepper. All-in-all we had a lovely, tasty, and healthy dinner. 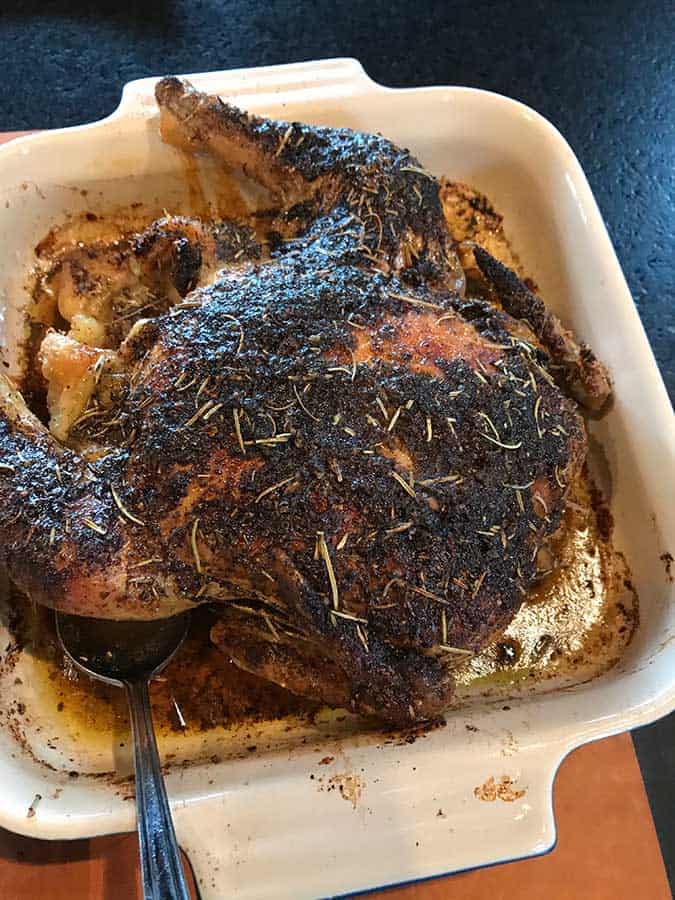 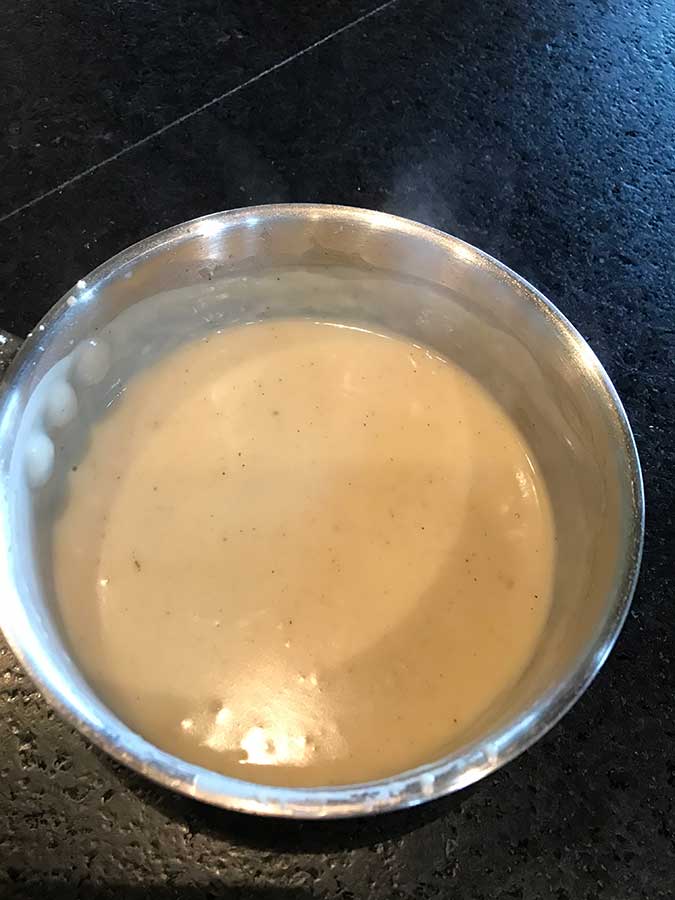 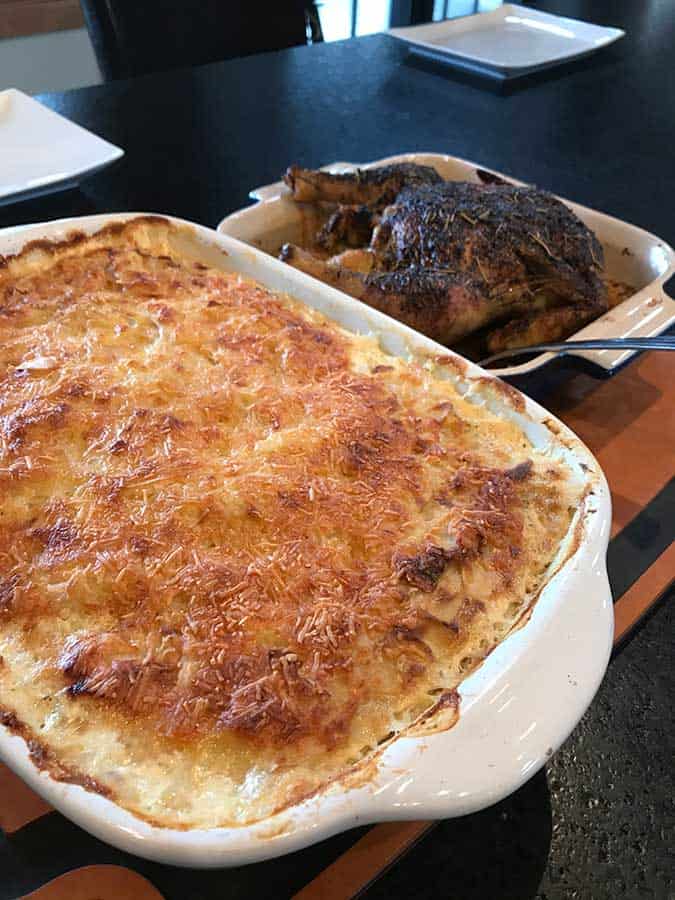 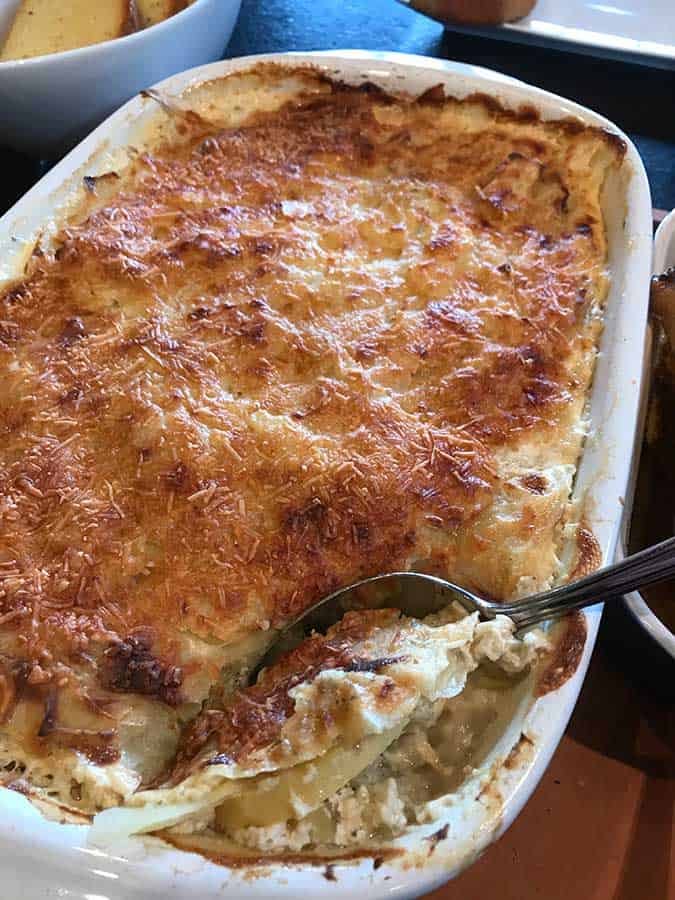