Life on the Rail Roads 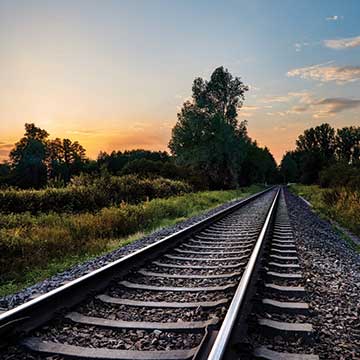 Railroads were once vital links from agrarian Dutchess County to New York City and beyond, hauling produce and products from the many farms that once dotted the landscape. The rail lines that ran across the local landscape like metal spider webs also carried passengers to and from the small towns of the area to near and far away places.

Gone are most of those man-made beats that regularly rumbled across the countryside, but remnants of a magical and important past can be found everywhere. From former train stations that now house businesses to abandoned rail lines transformed into trails that now take residents on much shorter excursions to enjoy nature and work up a sweat.

The effort to turn abandoned rail lines into a paved route for bicyclists, joggers, walkers, and anyone else who wishes to move the old fashioned way from one place to another was begun in the mid-1980s when local citizens began to work towards federal, county, and private funding for their dream. As of last year, over half of the proposed 46-plus mile trail has been built or funded. Recently, an ambitious project to link Millerton to Under Mountain Road, where a section of trail between Orphan Farm Meadow to the south ends, began in earnest. The trail also has a completed section running from Black Grocery Road north to Hillsdale. There are plans to eventually link all the various unfinished sections.

The Millerton to Under Mountain Road section is due for completion in the fall of 2020. It’s projected cost, $14.7 million, which is being funded through federal agencies as well as Dutchess and Columbia counties. The costly price tag is mainly due to the exacting work and long stretches of boardwalk that must be built through protected wetlands and the care that must be taken by the builders so as to not disturb the fragile environment. A ground-breaking for the section of the trail was held in April.

“This is a very difficult project,” explained Dick Hermans, chairman of the Harlem Valley Rail Trail Association. “The trail is going through Class 1, 2 and 3 wetlands and they are heavily protected. In some stretches trucks will actually have to back into the work areas, and we have some clearance from nearby property owners because we don’t want to build a construction access road and disturb the wetlands. The workers have to very careful go about what trees they take down and building the boardwalks is no easy feat. But we are all very excited about the extension, it first was said to be ‘imminent’ in 2005. So it has taken a lot of time and meetings.” The extension will connect the trail from Wassaic to Copake Falls, about 25 miles.

From the southern Trail Head at the Wassaic Metro North Station through the eastern side of Dutchess County the Trail heads north into Columbia County then west and north, there are currently 10.7 miles of completed, paved trail. There is an additional 5 miles of completed trail from Under Mountain Road in Ancram to Orphan Farm Road in Copake.

Hermans believes the rail trail has been a boon to Millerton and other communities it runs through or past. “We estimate that some 50,000 people a year use the trail. I know some people come up on the Metro North Train, get off with their bicycles in Wassaic and come north. Adding the new stretch will make that an even more attractive activity for bicyclists.”

And those bicyclists can only mean positive things for the local economy, as they may stop for a meal or do a little shopping on their way back to Wassaic or elsewhere. Hermans said, “I don’t think there is any doubt the rail trail has opened a lot of people’s eyes to what a charming little town we have in Millerton. People may bike here and then say they want to come back by car to shop and eat. And it’s a quality of life thing for our residents and a recreational venue for all ages.”

The New York & Harlem Railroad
According to the HVRTA’s website and with due deference to historians Heyward Cohen, Jack Shufelt, and Lou Grogan (The Coming of the New York and Harlem Railroad, Pawling, NY: Louis V. Grogan, 1989), in 1852, the New York & Harlem Railroad was built north to Chatham. This completed an extension of the railroad more than 125 miles northward from its origins in Manhattan. Products were transported by rail directly to New York City rather than depending on river transport via Poughkeepsie. The extended line also provided a rail route for people and commerce northward to Albany, Boston, and towns in Vermont and Canada.

The historians said the New York & Harlem Railroad originated in the 1830s as an early commuter railroad linking lower Manhattan (New York City) with the affluent new “suburb” of Harlem in northern Manhattan. In the early 1840s, businessmen pushed for an extension of the railroad much farther north after Boston was connected to Albany via the new Western Railroad of Massachusetts. Albany was the terminus for both the Erie Canal to the west and the newly constructed Buffalo-to-Albany New York Central Railroad. New York City businessmen worried that Boston would have a competitive advantage over New York City for the expanding “western trade.”

“By the early 1840s, the New York & Harlem Railroad had been extended northward into Westchester County,” according to the website report. “In 1845, the New York State Legislature authorized a further extension northward to create a connection with Albany. An inland route up what later became known as the Harlem Valley was chosen. The valley route was easier and less costly to construct than a route following the Hudson River. However, business interests in important cities along the Hudson River such as Poughkeepsie soon raised the capital to construct a second railroad line, the Hudson River Railroad. This competing project was completed to Albany at almost the same time as the New York & Harlem Railroad and wound up becoming a rail primary route.

According to the report, the upper portion of the New York & Harlem Railroad became a secondary line (the Harlem Division) in the Vanderbilt New York Central Railroad empire. “Nonetheless, it remained important to the transportation needs and commercial activity of eastern New York State and western New England for over 100 years.”

According to the report, the 1960s, new highways, turnpikes, interstates, a changing economy, and new lifestyles caused a decline in traffic and revenues on the Harlem Division. This led to service cutbacks and deferred maintenance, which then caused further loss of business, both freight and passenger.

In 1968, the New York Central Railroad merged with its former archrival, the Pennsylvania Railroad, to form a “mega-railroad,” the Penn Central Corporation. The historians said, “This new railroad was an operational and financial disaster and was soon bankrupt. Its management then embarked on drastic cost-cutting measures and sought to abandon thousands of miles of low-profit branch and secondary lines including the Upper Harlem Line (Penn Central’s term for the Harlem Division) between Millerton and Chatham.”

The report stated that this was vigorously opposed by Millerton’s Lettie G. Carson and a citizens group known as the Harlem Valley Transportation Association. Despite some successful court victories, a new federal plan to re-organize the Penn Central into a ‘down-sized’ Conrail System eliminated the Harlem Line north of Millerton in 1976. Subsequent ‘downsizing’ cut it back even further south, to Wassaic, in 1980. Eventually, service was cut back farther to Dover Plains. New York State’s Metropolitan Transpiration Authority (MTA) assumed responsibility for commuter services in 1972.
The service district was extended in 2000 back to Wassaic from Dover Plains. MTA’s Metro-North has upgraded the Upper Harlem Line and constructed new facilities located just north and outside of the hamlet of Wassaic. Although the Upper Harlem Line was abandoned and the track removed between Wassaic and Millerton and on northward to Chatham by 1981, the Harlem Valley Rail Trail began preservation of a linear corridor for alternative public use.

Beyond the ever-expanding rail trail, the railroad’s legacy in Dutchess County and beyond can still be seen everywhere. Two former train stations in Millerton are now occupied by business, Steed Real Estate and Country Gardeners Florist, the buildings’ charming exteriors and interiors preserved for all to enjoy.

A number of Dutchess County individuals took it upon themselves to save an area station from the wrecking ball, one that once served travelers in Pleasant Valley. After several moves from its original location near a present-day CVS store in Pleasant Valley, the station now resides at the Dutchess County Fairgrounds off Spring Brook Avenue in Rhinebeck. It serves as an educational venue, informing young and old alike of the powerful hold trains once held on the region and country.

The Coleman Station National Historic District is located around the former New York Central Railroad’s Coleman station in the Town of North East, a short distance south of Millerton. It is a rural area including several large farms in the southeastern corner of the town. At almost three square miles, it is the largest historic district entirely within Dutchess County and the second largest in the county.

The Canaan Union Depot, also known as the Union Depot, in North Canaan, CT, underwent a million and a half dollar restoration that brought the historic landmark a new luster and purpose. In addition to Great Falls Brewing Company, which occupies a significant portion of the building, there is meeting and office space and a railroad museum.

The station was built in 1872 and includes a three-story tower, at the top of which at one time worked a telegraph operator. In its heyday, the building housed two railroad operations, as well as a large restaurant. Regular service to the station ended in 1974, and it eventually became a retail location with the restaurant. The station was added to the National Register of Historic Places in 1972. More than half of the station was lost to arson in October of 2001.

The Connecticut Railroad Historical Association purchased what was left of the building in 2003, and the organization began to restore it. Part of the building’s shell and the tower were restored, but work then stalled for more than a decade due to lengthy negotiations to obtain grant money and other issues. The project finally picked up steam in 2014. The restored Depot’s exterior features interesting architecture, and the work has brought the Depot back to as close to its original design and appearance as possible.

While the rumble of train wheels over metal rail lines may be gone from the small towns along the tracks, the railroad and the land it crossed and stations where it picked up and dropped off passengers has transitioned into new uses and continues to have a lasting legacy that will hopefully carry well into future generations.