Litchfield County And The Great Influenza Of 1918 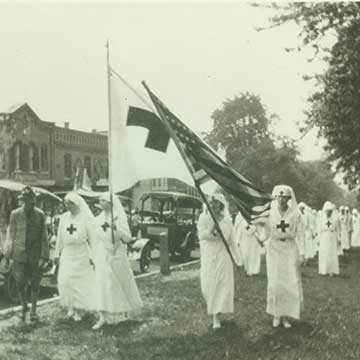 Residents of Litchfield County opened their newspapers in the early fall of 1918 to find stories about a French army band playing concerts across the region to celebrate the alliance of the two nations in the Great War, and about efforts in North Canaan to construct a wall of honor to commemorate those serving in the war, and lists of the newest draftees.

They did not read about a silent killer spreading across the state.

Wartime censors would not risk lowering morale with reports of influenza.

Still, many readers of the September 26, 1918 edition of the Connecticut Western News were saddened to learn of the passing of Private Arthur Caldwell of North Canaan at Camp Devens, fifty miles west of Boston. Corporal Howard B. Egleston of Falls Village died soon after, also at Devens. On Friday, September 27, Private William J. O’Donnell of Cornwall died at the camp, only three weeks after enlisting. The newspaper ascribed the cause of these deaths to pneumonia.

Pneumonia, however, is commonly caused by influenza, and Caldwell, Egleston, and O’Donnell were among the first residents of the northwest corner to die from the Great Influenza of 1918. Common symptoms included the rapid onset of chills, fever, and body aches. A gray tinge to the body was a sign the case was getting worse; a purple color in the lips or face meant a lack of oxygen and imminent death. It was not uncommon to cough up blood, nor to have a fever of 104. This pandemic has been much in the news since the onset of coronavirus (or COVID-19) in the United States in 2020, and an examination of the 1918 influenza provides both interesting parallels and significant differences from our own experiences in the past few months.

The pandemic likely began in Kansas in March 1918 and was carried overseas by American soldiers. Connecticut’s first cases of influenza were reported around September 1 at the naval base in New London, likely brought from sailors returning from abroad. By September 10 there were over 100 cases, and the disease had crossed over to the civilian population. At the same time, Connecticut soldiers returning home from Camp Devens on leave brought the disease with them to cities such as Wallingford, Willimantic, Hartford, Rockville, and Danbury. Epidemiologists have traced the peak of infections of the 1918 influenza across the state from east to west over successive weeks of October 1918. Despite blips in December 1918 and February 1919, the virus was essentially gone by the end of November.

“How to Avoid Influenza”

A week after reporting on the death of Caldwell, the Connecticut Western News announced the arrival of influenza in the area, not with a story detailing the disease and its spread, but with a sidebar outlining “How to Avoid Influenza” and “How Not to Give Influenza.” Among these were pieces of advice that would be familiar to Americans in 2020: “Don’t allow anyone to breathe, cough or sneeze in your face.” “Keep away from public gatherings.” “Upon the first indications of cold or fever retire immediately to your home and send for the doctor.” Others, such as “Avoid overwork and excesses,” seem antiquated. The Bridgeport Telegram warned its readers about dangerous behaviors in rhyme: “You mustn’t cough, you mustn’t sneeze/You must keep out of draft or breeze/You mustn’t laugh, you mustn’t cry/And you must guard both mouth and eye.”

Influenza was nothing new, which also helps explains the relative silence of the newspapers as the number of cases grew. Certainly, many Connecticut residents in 1918 remembered the very bad 1892 outbreak. What made 1918 different, however, was that it was a far deadlier strain of the disease, with a mortality rate of more than twice that of 1892. To that point, a typical flu season in Connecticut saw a death rate of 11 per 1,000. At the peak of the Great Influenza, the Nutmeg State experienced a death rate of 79 per 1,000.

The severity of the flu eventually got people’s attention. By October 10, news regarding influenza shared top billing with reports from the battlefront. The Connecticut Western News reported 150 cases in North Canaan. Ten members from a single family in Norfolk were ill. Twelve guests at the Falls Village hotel were sick. Telephone and railroad service to many towns in the area ceased as operators and railroad men fell ill. Businesses shut down across Litchfield County and most towns closed their schools for several weeks. Residents were cautioned to stay in their homes whenever they could. If they had to venture out, they were urged to wear cotton masks and to avoid crowds. The next week the newspaper started reporting on individual cases. Several pages were filled with lists of those suffering from the flu, those who had recovered, or those who had succumbed. Five residents of Falls Village and another five from North Canaan died that week alone.

Number of cases – and deaths

It quickly became clear that those in more densely populated areas were especially susceptible to the disease. This was confirmed by Charles-Edward Amory Winslow and J.F. Rogers, professors at the Yale Medical School, who found that death rates in large towns were as much as four times higher than in farming communities. In Litchfield County, Winslow and Rogers found that the death rate in towns like Winsted and Torrington was 25.4 per 1,000 while in towns like Harwinton, Kent, and Woodbury the death rate due to influenza or pneumonia was 6.4 per 1,000.

Close working conditions in factories helped spread the disease. This is underscored by the fact that men – far more likely in 1918 to work outside the home than women – accounted for nearly 60% of all flu deaths. Similarly, there were significantly fewer cases – and deaths – in towns without railroad service as the movement of people from town to town also moved the disease. For example, Bethlehem, Goshen, Sharon, and Warren – all towns without a railroad – had a combined population of 6,000 but saw only eight deaths.

Connecticut had a very high number of cases and deaths compared to other states, and obtaining the medical care needed for patients was made worse by the concentration of the disease in certain geographic areas, like large cities. If influenza reached a town, that locale would likely quickly exhaust what resources it had to care for patients. Local chapters of the American Red Cross heeded calls put out by their national organization to rapidly train women to serve as nurses, to dispense medications and supplies liberally from its stockpiles, and to dispatch armies of volunteers to homes where the mothers or housekeepers were sick, to, as the Connecticut Western News put it, “assume the management of the household.”

In Litchfield, the effort to care for patients was led by Harriet M. Richards, who in 1910 had founded the District Nursing Association, an organization that by 1914 was an affiliate of the Red Cross. Richards worked quickly to secure permission to use the Litchfield Country Club, then just over one year old, as a hospital. She brought in beds, rounded up nurses, and brought in patients from across town not only to care for them but to isolate them. Mirriam Hubbard led a group of women who worked daily to provide food to the impromptu hospital. Still, in 1918 there was no testing to identify cases, no antiviral medications to treat the flu, no antibiotics to treat associated infections, and certainly no vaccines. The most effective public health measure was to quarantine those who were ill. Individuals who became sick were given fluids; any other treatments that may have been prescribed were ineffective.

The devastation left by the Great Influenza of 1918

The Great Influenza left Connecticut about as quickly and quietly as it came. By the first week of November, there were no stories about the flu in the Connecticut Western News except the listing of those who had recovered in the “News from Nearby Towns” section. Schools reopened in most towns around November 1. The end of the war on November 11 occupied the attention of the editors and their readers. Still, it left devastation in its wake. At a national level, more Americans died of the flu in 1918 than in any of the nation’s wars except the Civil War. Approximately 8,000 residents of Connecticut died, 1,700 on October 19 alone. Waterbury was the state’s hardest-hit city, with 654 deaths in October. In Litchfield County, Torrington recorded 126 deaths, Winchester 53, and Plymouth 43. Across the state, public funerals were banned in an effort to stop the spread of the virus. Mitigation efforts such as this had only limited success; by the end of November, approximately 25% of Connecticut residents had contracted influenza.

Reflecting on these events of just over one hundred years ago while living through another pandemic naturally calls for comparisons. Both outbreaks were marked by rapid spread, with public health officials calling for quarantines, bans on large gatherings, and mandated mask wearing. The differences, however, may be more dramatic. Medical providers could do little to treat those who contracted influenza in 1918; in 2020 several therapeutic drugs and more effective methods of treatment were identified in a relatively short period of time. COVID-19 has hit older Americans especially hard, while the 1918 flu killed more young adults, likely a result of its spread among soldiers. We certainly don’t know when the COVID-19 crisis will abate; what we do know is that it has already lasted far longer than the worst of the 1918 Influenza crisis.

While both viruses deeply impacted the state’s daily life, economy, and public health, 1918 saw a much greater rate of death. In April and May 2020, 3,944 residents of Connecticut died due to COVID-19 or complications from the disease, a tragic rate of 65 per day. However, if the numbers from 1918 are adjusted to take into account that Connecticut’s population in 2020 is 2.5 times larger than it had been a hundred years earlier, the Great Influenza would have been responsible for 331 deaths per day.

History provides us with a clear reminder to continue to follow the CDC guidelines for curbing the spread of COVID-19. •