Lives in the Theater

There is something gracefully disarming about a conversation with Alan  Wager and Robert  Levinstein. They are so fully engaged as the managing director (Robert) and artistic director (Alan) of the Sharon Playhouse, that most every topic turns into a celebration of the theater, the community, the way in which a potentially nightmare summer has turned into a celebration … and what next season can mean.

The two met 25 years ago in Southern California – where both had been born. Alan grew up in Fullerton, had a California State University system education, and had been acting professionally since he was 15. He had rapidly worked his way to the point where he held the treasured “Equity card” – recognition from Actors’ Equity Association that he had performed in a sufficient number of productions to be recognized as professional.

Utilizing his innate talent and linguistics training, Alan not only pursued his acting career, but became a recognized voice teacher. An actor’s life is not always a steady climb, but after appearing in regional theater across the country, he was cast for the Broadway tour of Beauty and the Beast and his career has continued to flourish. 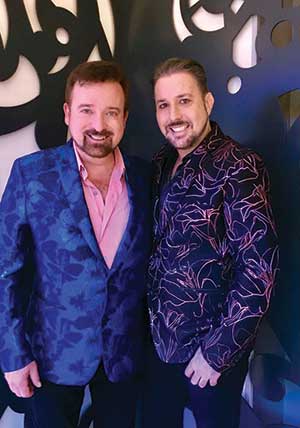 For his part of the partnership, Robert grew up in Whittier, CA, and began his theatrical training in a community college where a perceptive mentor encouraged him to learn all of the stagecraft skills he could. From stage managing to lighting design and carpentry, Robert learned the “bones” of the theater. Along the way, he gained recognition for his capacity to juggle the many tugs and pulls of bringing a production together and emerged as a celebrated production stage manager.

It was at a point of inflection for both Alan and Robert that their view turned to the east and the new possibilities a transcontinental move might bring. They had met during a West Coast production, had begun their long-standing partnership and were at a crossroads. Pooling their hard-won savings, the decision was made. Time to head to New York, the theater capital of the world.

One of the creators of The Sharon Playhouse was a noted fiction writer, Judson Phillips. As a cap to a career of writing over 100 detective novels, most under the pen name “Hugh Pentecost,” Phillips had settled in Lakeville with his wife, Norma Burton, an actress. He could write his mystery novels anywhere, but Norma needed a stage to perform. And so, The Sharon Playhouse emerged.

One of Judson Phillips favorite definitions of the theater was “theater is about people.” It is the absolute truth of that statement that has been the guiding principle for Alan Wager and Robert Levinstein during their three season tenure at the head of the Playhouse. From the selection of plays that will appeal to the local audience (itself a hybrid) to the ways in which they engage in the community, both recognize with equal panache that the success of the Playhouse is and always will be “about people.”

The “long and winding road” that has brought Alan and Robert to Northwest Connecticut and the heart of its regional theatrical/entertainment world has been marked by what management icon W. Edwards Deming would have termed “continuous improvement.” Alan’s shorthand affirmation is “Don’t burn any bridges,” and that operating attitude has done well for both he and Robert as they have built their careers – individually and as a partnership.

Those familiar with the New York theatrical world appreciate with knowing smiles the terms “Off-Off Broadway,” “Off Broadway,” and the crown jewel, “Broadway.” For those who dive into the ebb and flow of New York theater, there is often the requirement to spend time Off-Off Broadway. Theaters set above retail blocks in Brooklyn, church basements set for 50 in the audience, and pop-up venues that serve for a night, a week, a month, then disappear are all part of the mix. Robert spent time working his way up through the production management roles, all the time keeping an income sustained by working in hotel audio-visual departments.

For his part, Alan was working in whatever productions presented themselves, often out of town, but always with an attitude that was supported by the “no burning bridges” philosophy. It is inevitable, as careers find their course, that there are many meetings, many collaborations, many moments that bring talents together for a production, a weekend concert, a summer season.

Once he had crossed the hurdle of getting his own Equity card as a stage manager, Robert found his talent recognized by theater companies that needed his steadying hand. Beginning with a turn at the North Shore Music Theatre and quickly moving on to a resident position at the legendary Ogunquit (ME) Playhouse, Robert rose to become production stage manager to the role of associate producer. Alan was very much a part of the mix in Maine and was also producing and casting the theater’s shows.

A production company of their own

It was on the strength of their resident company experience that Alan and Robert decided that, as a production team, they had the deep experience needed to create and produce their own shows. 22Q Productions has been the result … with the obvious question of what the significance of the name might be. “It’s our apartment number in New York,” offers Alan with the gentle laugh of one who has heard the question asked many times with a variety of well-intended answers offered.

Under the banner of 22Q, the two have been recognized in the Off-Broadway production world for creating new events that continue to draw appreciative audiences. “We seem to have found a home at St. Luke’s,” offers Robert, referring to the Off-Broadway theater at a New York church. “We’ve produced in a number of quirky places,” adds Alan whose experience in musical theater was helpful as the pair produced The Spoon River Project based on The Spoon River Anthology, this time with music added and presented in Green-Wood Cemetery in Brooklyn, “What better place to present a play that brings the dead to life than a cemetery?”

After two profitable seasons heading up The Sharon Playhouse, Levinstein and Wager were heading into the 2020 season with great expectation. “We had brought the audience back,” affirms Wager. “Both the weekenders who have places tucked in the local hills and the full-time residents found a common home at the Playhouse.” An Equity company – which means that productions are under the auspices of the union – the production duo have worked within the guidelines to bring recognized professional actors and directors to the stage while adding local, amateur talent to larger musical productions.

“With both the main theater and the Bok Gallery stage, we were targeting the broader community, the extension of our children’s theater program, our cabaret series, and some new material.” Levinstein reflects on the challenges of keeping the program alive while working within the crippling restrictions of a COVID-19. “We turned to our friends.” The parade of stellar cabaret performers attests to the notion of never losing contact … never burning a bridge.

And, with reference to the enjoinder to never burn bridges and learn from every experience, the Playhouse parking lot has been reconfigured to accommodate 52 cars facing a temporary stage with theatrical lighting and audio provided on a localized FM radio frequency. “We’ve sold out every show,” celebrates Wager. “People have wanted to look forward to a weekly event that gets them out of the house, respects the need for social distancing and provides great entertainment.”

The outdoor programs will continue into September with a significant new theatrical piece being offered on Saturday, September 5. The Perfect Fit will be presented as a staged reading with music. That, in itself, may be simply another event announcement. When the fact that the playwright for The Perfect Fit is 13 years old and the production album is already produced makes this evening quite special. “Joshua Turchin is a child of the theater, and he’s managed to offer a candid, funny, engaging look into what the world of the child actor is,” affirms Alan Wager.

So, for Robert Levinstein and Alan Wager, the show goes on. The 2020 season was not cancelled … just postponed to 2021 when the hope of some pandemic resolution offers the prospect of another chance for The Sharon Playhouse to do what Alan and Robert instinctively know is what is important. “Make people happy.”

After all, as Jud Phillips said so many years ago, “the theater is about people.” •

Keep current on programs and schedules at The Sharon Playhouse at sharon-playhouse.org. 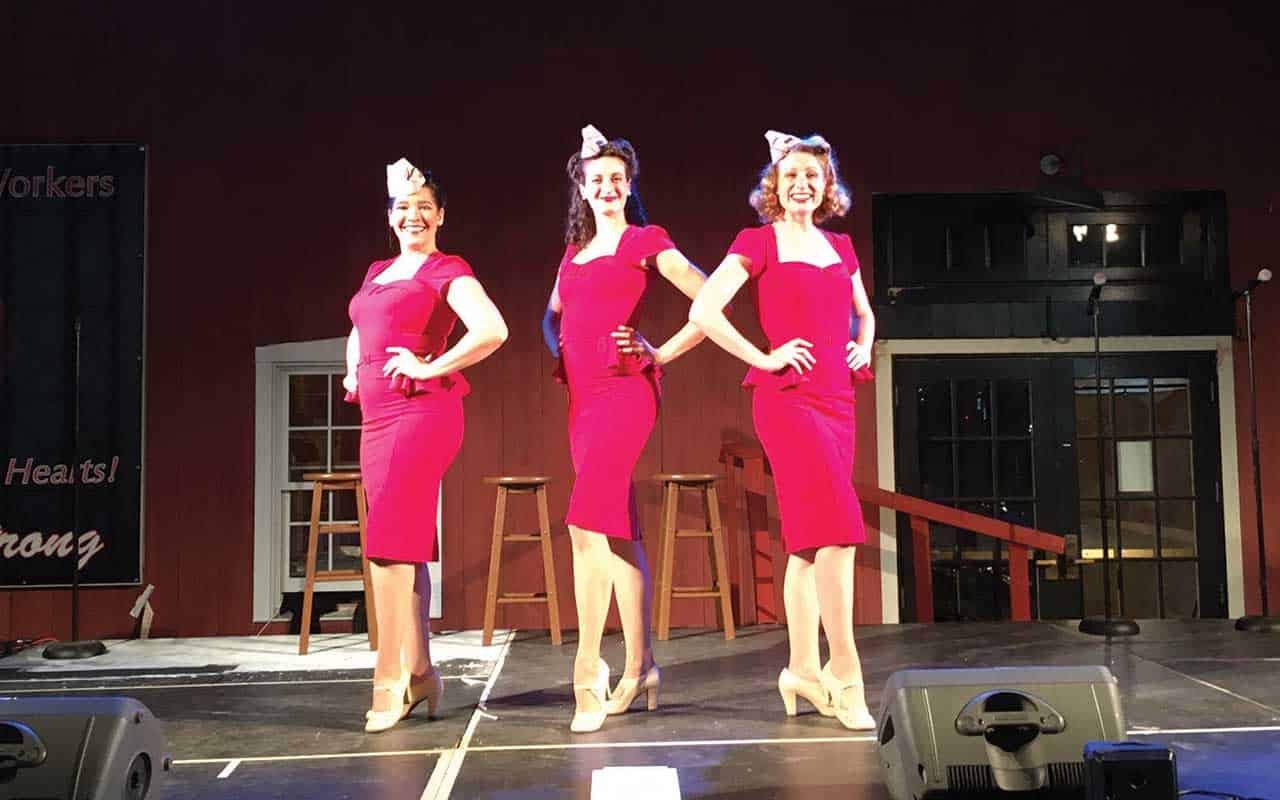