Living at the Edge

“My father was a blacksmith and a carpenter. I learned at his side.”

Chelsea Miller is looking at an elegant carving knife of her own creation, remembering how she moved from New York actor to celebrated creator of highly sought after knives all within the sphere of family influences and support. As she so succinctly sets the stage, “I was home schooled by my mother and life-schooled by my carpenter-blacksmith father.”

“I had moved from Vermont to New York City to study acting and pursue it as a career. When my father became sick, I returned to Peacham, VT, to help with his recuperation. He had let me explore the workings of a blacksmith shop as a kid … and coming back home, the magic captured me.”

Well into the back story of Chelsea’s blossoming as a knife maker was the fact that her father, when he and his wife decided to leave the city and forge a life in the country, had used a team of horses to log the forests and construct the post and beam barn on their land. A critical part of the keeping of horses is being a farrier – one who tends their hoofs and refreshes the iron horseshoes. A farrier’s rasp is an imposing tool, and it was working with discarded rasps in her father’s workshop that gave Chelsea Miller her start making knives.

“I went to acting school in New York and struggled like any actor to get both experience and meaningful work. I have always considered myself an artist and the rural existence left me longing for artistic interaction. I was active in theater, film, music, and dance. After several years working in New York City, my father became ill and I chose to leave New York and assist in his complex care the last few years of his life.”

“After aiding in the care for my father, I returned to Brooklyn, but this time, my focus was creating excellent knives … a practice I had developed while in Vermont. I started out selling them at the Brooklyn Flea.”

The “Flea” has, since 2008, become a New York tradition, offering weekend markets that feature artisans, collectors, secondhand furniture purveyors, and a tightly curated group of culinary offerings. The weekend “happenings” are creatively placed in city areas frequented by locals with both inquisitive natures – and means. Most importantly for Chelsea, “the Flea draws an incredible audience of chefs, writers, and restaurateurs. Once established at the Flea, my work got noticed, reviewed, and talked about.”

The notice was effusive. References appeared in local and national magazines of the curiously elegant knives Chelsea had on offer. When New York chefs felt the heft and understood the razor-sharp nature of her creations, they wanted to have them as part of their kitchens. 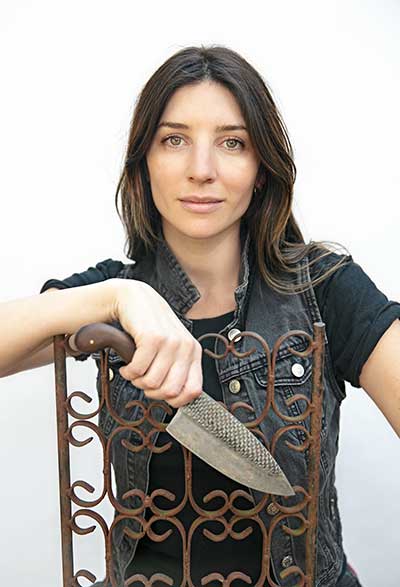 The word spread through publications as far reaching as the NY Times (“If knives can be a work of art the ones Chelsea Grace Miller crafts … certainly qualify.”), the Robb Report, Food & Wine, and Saveur. Videos followed with stalwart sources like Popular Mechanics and one-on-one conversations with celebrity chef Mario Batali. Each told the affirmative story of an artist whose medium is iron, whose passion is creating beautifully designed knives that grace some of the finest restaurants in the world.

The power of reputation

Over the ensuing years, chefs have not only returned to Chelsea to add to their collections, they have schooled an army of sous chefs and kitchen assistants who, once having worked with her knives, had to have some for themselves. “Word-of-mouth has been a continual source of connections and sales,” confides Chelsea.

At a moment of inflection, Chelsea and her partner, fabled rock drummer Bruce Smith, decided that it was time to step away from city life and move to the country. Their searching began in the Hudson Valley and expanded, after a time, to nearby Connecticut. They found their ideal spot in a corner of Falls Village, CT, in a house that, for those of a certain age and memory, had a storied past.

At home on the mountain

Their home sits comfortably on several acres with ample lawn for gardens and seating areas. It sits on a relatively new foundation and basement that serves as Chelsea’s workshop. The fact that the house above the ample basement was not created there was a story of its own. Originally constructed just off Route 63, several decades ago the house was purchased, deconstructed, and moved little more than a mile away from its original setting. The fusion of old and new reflects a parallel in Chelsea’s own work.  The farrier’s rasps are old. Her knives are new. The continuum continues.

Ensconced in her basement studio, Chelsea conducts her own ballet of working with the initially bold, heavy rasps and grinding them with artistic precision to become the knives so sought after. By her own admission, the current waiting list for her work is six months. Those who want to add a Miller knife to their gourmet kitchen must match their passion with patience.

“Knife making is a safe place for me … for self-discovery, creative expression, and a kind of personal freedom.” With a grinding wheel, a small forge and the polishing equipment needed to create the blades, there is the requirement to add handles that match the artistry of her work.

“I use several different woods, mostly pieces of wood gathered by my father and stored in the family barn in Vermont. Maple, cherry, apple, and oak – working the wood into smooth, balanced handles is as much a part of the artistry as grinding the blades. The materials I use have personal significance for me, sharing the significance with others is part of my story.”

Those woods appear in other creations available on Chelsea’s website – elegant cutting boards, wonderful wooden spoons, and wooden sauté forks inspired by her mother. The knives offered cover the gamut from kitchen knives to sets of steak knives to cheese knives that would set off any presentation.

And, a final benediction that is the invisible gift with each new knife – “I hope my knives enrich relationships between family and friends and the food we prepare and share together.”

To learn more about Chelsea Miller and to see her work, you can visit her online at www.chelseamillerknives.com. 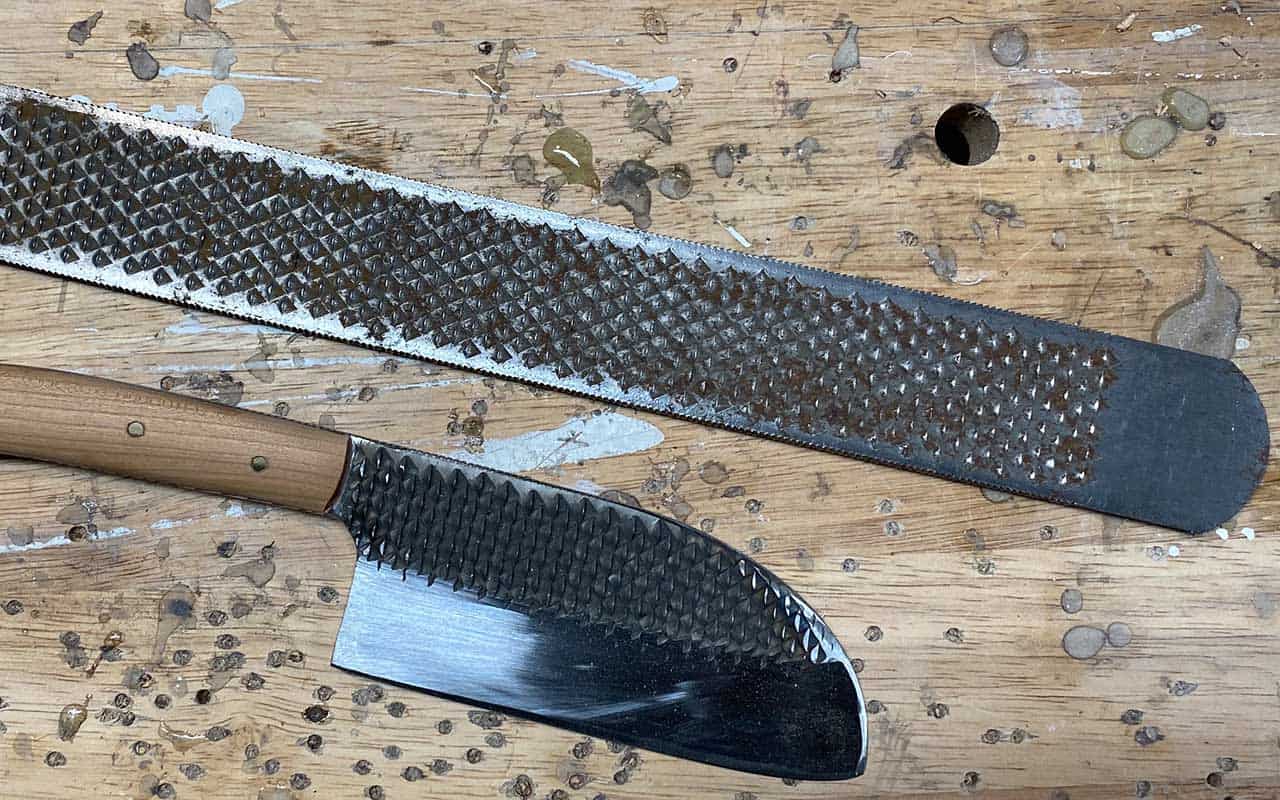