Living in a Symphony 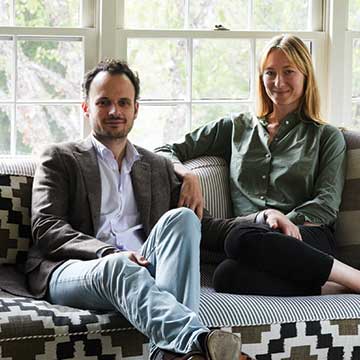 Theirs is a story so magical, it almost cries out for its own musical score. It must be original music, of course, not derivative, but a piece as unique as Anthony and “Charlie” Champalimaud are is individuals and as elegantly lyrical as they are as a couple and proprietors of the Amenia, NY, hospitality gem – Troutbeck.

So replete with historic references, famous visitors, and monumental events that it could deserve a volume all its own, Troutbeck today is the realization of imagination, drive, sensitivity, creativity, and conviction that mirrors the work these two have invested in not only restoring the property to its pristine beauty, but making it a true “go to” destination in the Hudson Valley and nearby Litchfield Hills.

How it all began in Kenya

The opening bars of this orchestration must have the emotional beat of tribal drums. For Anthony and Charlie (her given name is Charlotte, but the energy and brightness of her character make calling her “Charlie” an absolute must) the story began in Kenya. “We met at a wedding,” comments Anthony with a quiet candor that is very much in keeping with his personality. “We were both invited to attend by the owner of the retreat where the wedding was held…,” “…and I decided that when we met, we were going to be completely up front from the beginning,” Charlie completes Anthony’s sentences in a way that bespeaks the incredible bond they have.

That first meeting quickly became days and weeks – and intercontinental travel – and Anthony needing to fly from London to Norway – and invitations to picturesque Scandinavian Christmas celebrations. Theirs is a love story of long flights, tight connections, late nights, early mornings, and a soundtrack punctuated with laughter.

The not-so secret “of course”

The musical score shifts to elegantly played piano, the singing of traditional Christmas carols and an exhilarating conversation with Charlie’s father that beautifully played out the trusted tradition of asking for a daughter’s “hand in marriage.”

The fact that Johan said, “Yes … of course…” was to be kept a secret. Anthony wanted to ask Charlie to marry him where and when he chose. By the end of that December evening, however, her father’s permission had gone viral. Literally around the world, there was an audience eagerly waiting to hear the orchestration of the next movement. When would they would marry?

But Anthony is patient and focused with laser-like precision. The musical score shifts once again to the fully orchestrated horns and strings and percussion of New York City where, marriage proposal accepted, Charlie and Anthony marry on an April day, scurry north to have drinks and oysters at the legendary Oyster Bar at Grand Central Terminal, visit the terrace of Grand Central where Charlie tosses her bridal bouquet, then off to celebrate with a performance of Hamilton.
Primitive. Classical. Orchestral. Rock ‘n Roll. Big Band. Rap. New Age. World Music. And, that’s just the beginning.

Charlie and her travels

International travel was not unusual for Charlie, who had created a career with UNESCO, lived in New York, traveled the world, taken a degree in War Studies at London’s King’s College, worked for Human Rights Watch, and found great fascination with the cultural heritages of Africa. Preserving the heritage of Troutbeck while making it accessible and welcoming for new generations is clearly a focus for her and perfectly meshes with Anthony’s vision for the property.

Anthony had grown up in Canada, where his internationally celebrated mother, Alexandra, had emigrated from Portugal when military coups made life in her native country unbearable for a family with two young sons. Her tenacity and talent merged as she created Champalimaud Design and has proceeded to build a blue ribbon client list that includes design work for hotels around the world: The St. Regis in Beijing, Four Seasons in Jakarta, and the Waldorf Astoria in Chengdu among many others.

Anthony speaks with great affection about his mother who worked with the young couple to create the enchanting design of Troutbeck. Alexandra, who has a home in Litchfield, visits frequently to incorporate time with Anthony and Charlie’s son, Johan Carlos.

“When I first came to the US with Anthony, we came to Troutbeck,” recalls Charlie. “Just the potential for this to be something truly wonderful was evident. I wanted to be very much a part of making Troutbeck what it is … and can be.”

Charlie’s background in cultural heritage and restoration serves her well as she digs deeper into the history, the aura of Troutbeck, and manages to incorporate that sensitivity into a place that is not a museum but a living extension of the rich history that has been part of the property since its initial construction in 1765 by the Benton family.

Anthony studied art in England and pursued a career that intersected with Champalimaud Design, working his way up to upper management and gaining a fully realized knowledge of the hospitality industry, executed with style, elegance and utility. “It took over six years for us to acquire Troutbeck, but through that entire period, we were tightly focused on the notion of creating a welcoming, peaceful place to which people would be drawn to fully experience what we have to offer.”

They make Troutbeck greater than the sum of its parts

The simple facts about Troutbeck as it is offered to patrons include 37 guest rooms, a secluded pool, gardens, trails, a meandering river, an outstanding farm-to-table restaurant presided over by Chef Marcel Agnez, and great meeting spaces.

What Anthony and Charlie have brought to the property are the intangibles that move the physical space into the realm of being an experience. “We want the community to be comfortable here,” offers Anthony, who refers to the menu in the restaurant and a robust hosting of community events ranging from film screenings hosted by the Boondocks Film Society to lectures by internationally renowned authors to appearances by Pilobolus, the adventurous dance company from Washington, CT.

Perhaps the most vivid example of the realization of that wish was the New Year’s Eve Party as 2017 became 2018. The announcements had been made. The menu was set. The music was carefully selected. “But, who was going to show up?” Both Anthony and Charlie smile demurely as they reflect on the “big evening” and the calculated risk they took. “Suddenly, people just started appearing,” remembers Charlie. “And by the end of the evening, the predictable small groups and cliques had given way to one tremendous party,” finished Anthony with a grand smile. “It worked!”

A broad invitation to a perfect home

Weddings, corporate retreats, board meetings are all welcome at Troutbeck, but an equally expansive welcome is offered to entrepreneurs looking for space to think, dream, and “ideate.”

“We have great spaces to reflect – to think – to have quiet conversations – to explore,” suggests Anthony, whose own reflective style finds form and substance in this special place.

In very intoxicating ways, the personalities of both Charlie and Anthony have blended into the historic setting of Troutbeck. They have not allowed it to be a staid, somewhat tedious memorial to the parade of thinkers, artists, writers, political figures, and imposing historical personages who have walked these gardens and paced these halls. They are vibrant, energized, open and truly gracious people … and this unique creation reflects those qualities at every turn.

Getting people to talk about the future can be daunting, amusing, or directionless. With Anthony and Charlie Champalimaud, the discussion is electric: “Nothing stands still,” offers Anthony. “There are plans emerging that we can’t yet discuss, but they are very real and very exciting.” And, Charley picks up the thread and carries it forward. “We’re moving quite near here so that we can be more present, more engaged. There is so much to do – so many things to enjoy and celebrate about the area and the experience, we want to make sure we don’t miss a thing.”

And, the music plays on …

Anthony and Charlie Champalimaud are best found at Troutbeck.

To learn more about Anthony, Charlie, or Troutbeck visit, www.troutbeck.com.