Living in the Real World

Artist John Morra arrived in the Hudson Valley about two decades ago with two pugs in tow. He soon took up residence and set up a studio in an old church in Stuyvesant where he currently lives with his wife Isabelle Bosquet-Morra – a floral designer who initially hails from France.

Knowledge and experience are sources of inspiration for his oil paintings. “Knowledge means ‘thinking about art’ and this happens when I read art history, study old paintings, or abstractly dream about a concept and try to give it form,” said Morra.

“Experience refers to the act of looking at things, people, places – all the things that are right under our noses. I don’t look to movies or digital imagery. I think the real world is far more beautiful and bizarre than anything online. Just studying someone’s face or marveling at the texture of an onion is enough to light the fires for me,” he added.

Like many artists, Morra began creating art as a child. He recalls the first time his teacher’s eyes lit up when she saw his drawings. Although he was only in second grade, he knew he wanted to be an artist. At the time, Morra gravitated towards subjects of monsters, war scenes, and kung-fu fights. Since he wasn’t particularly good at sports, art seemed like a means of being accepted and admired. It provided a source of comfort and validation.

During high school, Morra drew cartoons for his school newspaper. After graduation, he traveled to Europe where he visited many of the world’s most notable museums. “It was as if I were seeing my destiny. Some boys might feel that way upon watching baseball player Mickey Mantle, but for me it was Rubens paintings in the Museo Nacional Del Prado in Madrid,” he said.

Europe was also where Morra discovered ancient history, classical music, romantic castles, and mind-boggling cathedrals. “It was overwhelming and lit a fuse of insatiable curiosity and wonder that still burns today,” added Morra.

Since his father was in the United States military, Morra’s family moved around a lot. Meridian, MS; Troy, NY; South Carolina, and San Diego, CA, were all destinations he called “home” at one time or another.

After earning his bachelor’s degree in English from Westmont College in Santa Barbara, CA, Morra enrolled in drawing classes at Santa Barbara City College. He went on to earn a Bachelor of Fine Arts from University of California, Santa Barbara before he attended Manhattan’s New York Academy of Art, where he earned his Master of Fine Arts degree.

After working as a mural painter for various studios, Jacob Collins – a realist painter based in New York City, became Morra’s “unofficial” post-graduate teacher and mentor. He had a profound influence on Morra’s career.

While Morra was in New York, he established his career as an exhibiting artist. The now defunct John Pence Gallery in San Francisco was the scene of his first solo show. The artist was previously represented by New York’s Hirschl & Adler and Eleanor Ettinger Gallery, which have both closed their doors. Since then, Morra has been selling almost exclusively from his studio in Stuyvesant.

Morra ended up settling in the Hudson Valley after visiting the region and touring the church that was for sale. It was then that he decided to flee New York City. Although Manhattan’s culture and art still excites him, Morra couldn’t pass up the opportunity to create his dream studio, which also had an apartment on its premises. After renovating the church, Morra moved in around 2002.

“The church has a beautiful, gigantic bell from the Meneely bell foundry, which was the most important bell maker in the United States during the 19th and 20th centuries. Whenever I ring it, I’m delighted. Who gets to have their own bell tower?” asked Morra.

His interest in still life painting evolved after his formal training. As a student of the New York Academy of Art, he spent hundreds of hours drawing models and studying anatomy. Under the guidance of his mentor, Jacob Collins, Morra began painting landscapes and still lives, and honing his use of color.

“Once I spent time painting outdoors and setting up elaborate ensembles of fruits and vegetables, I suddenly loved these genres. I was soon painting landscapes and still lives and selling them. What began as refresher course with Collins became a joy and source of income,” revealed Morra.

Still life will always be a favorite for the artist who is drawn to the endless possibilities and established nature of the genre – the conventional subjects that have been done by everyone. “My reason for this is simple. When painting a basket of apples, one must bring something truly fresh to the image that makes it take flight. Regardless of what some say, conventional subjects can have a continuing ability to surprise and delight, simply by their excellence,” he added.

When Morra travels to France, he paints outdoors – plein air. “Every trip makes me see something novel. I enjoy making the unlovely and the unexpected into something beautiful. My approach is governed by this idea, as is my approach to landscape. I love the conventions, but also the departure from them,” said Morra.

Although he hasn’t painted a proper human figure in years, Morra has a keen desire to create a “market picture,” common in 17th century Flemish painting. He explained that it’s typically a booth or display filled with either game (meat) or vegetables and fruits for sale. In these works, there’s often a figure, typically a “farm girl.” Morra has already found a farm worker to pose for him.

When creating portraits, he usually works from photographs. Morra said he learned a lot from working that way. He pointed out that very few people are willing to sit for hours, over a period of weeks or even months, for a portrait painting. Today, almost everyone uses photographs in some form.

“I love all the good ones from all centuries and the okay ones. The horrible ones are sometimes fun, sort of like the pleasure of watching a bad movie,” revealed Morra. His favorites include artists Johannes Vermeer, Jean Siméon Chardin, and Jean-Baptiste-Camille Corot. “There is no one really like Vermeer. He is rare because he’s one of the few artists who was able to make great art out of visual experience alone. He is truthful and yet also, paradoxically, beautifully and deliberately designed,” explained Morra.

He credited Chardin for inventing the still life as we know it and believes the French painter’s way of bringing personal vision and emotional depth to the genre was unprecedented and seemingly ended the entire Dutch tradition. “I love Dutch art, but not as much as Chardin’s art. His closest descendent is painter Walter Tandy Murch, who I see as his only real heir in our time,” shared Morra.

He believes that Corot may be the greatest of all landscape painters. Most of all, Morra appreciates the French landscape painter’s range – from frightfully honest paintings of the lighting in Italy’s vistas to misty, dreamy reveries. His figure inventions were unique. He seems to be anticipating cubism – or something modern,” concluded Morra.

All these painters were relatively untrained. Morra senses that they became distinctive due to their lack of knowledge. It may have encouraged them to try harder. 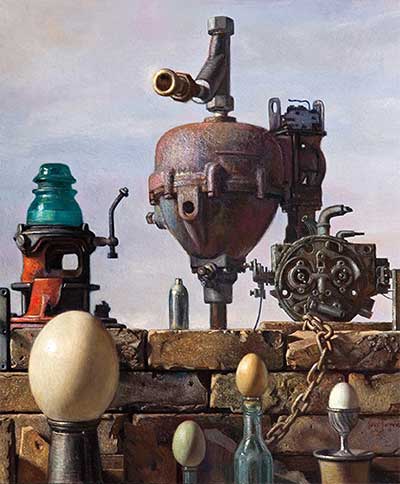 Morra’s Mertz series offers a unique perspective in terms of lighting and outcome of the finished works. A favorite subject, he said that he is continually surprised by this body of work. “I wonder sometimes how I made them at all,” he added.

The Mertz experiment came about by accident. In 2001, Morra took a box of old radio parts, set up a combination of vacuum tubes, diodes, and knobs, and set out to explore a technical problem – how bright can he make a painting and still have room for the highlights?

The vacuum tubes, with their silver interiors and glass skins, afforded the ultimate in gleaming surfaces, so he had a splendid time just getting the metallic colors right. “As I was finishing what seemed like an exercise and felt that I had learned what I could from the junk in front of me, I was surprised to see the little world I had arranged taking on an entirely unintended persona. It looked like something more than a still-life; in fact, it started to look like a little cityscape,” said Morra.

Since he wasn’t sure exactly what it was, Morra searched his memory, so he could provide a title to the work. The chaos of the set-up reminded him of Dadaist collages, and those by Kurt Schwitters. Morra recalled that the German artist invented a kind of collage with machine parts and garbage. It was titled Mertz, so Morra decided to pay homage to this by titling the work Mertz Number 1.

“The problem was, when I went back and checked some books about Schwitters, I found that it was ‘Merz’ not ‘Mertz.’ I decided to stick with my faulty memory and probably made Dada artists happy in their graves,” said Morra.

Chardin and Walter Tandy Murch, who he sees as the modern continuation of Chardin, were also sources of inspiration for this series. He believes that both Chardin and Murch have a special way of seeing very ordinary things.

An entire series of works followed, which Morra plans to continue until he puts down his brushes. Other collections include Kitchen Mixers, which caught Morra’s attention because he thinks these gadgets are “hilarious-looking.” He sees human faces and mechanical insects in what others see as ordinary kitchen tools. The mixers are a continuation of the Chardin spirit – the ordinary that becomes the extraordinary by a mixture of intense inquiry/observation, which is mixed in with love.

There’s also a nostalgic component to these works. Morra believes that mixers look like spaceships and remind him of the cheery optimism of the 1960s. In this sense, there’s a celebration of the space-age optimism and bittersweet lament since it did not turn out as people hoped. In this sense they are part of the Mertz series, which is both a celebration of the machine and a criticism of what used to be called “progress.”

Last month, Morra hosted an open studio party. He may host another event in summer 2023. At press time, the painter was working on his Flemish-inspired market theme. Stay tuned for exhibitions in the new year. To learn more about John Morra and his paintings, visit him online at www.johnmorrapainting.com, or you can call him at (518) 758-8884. 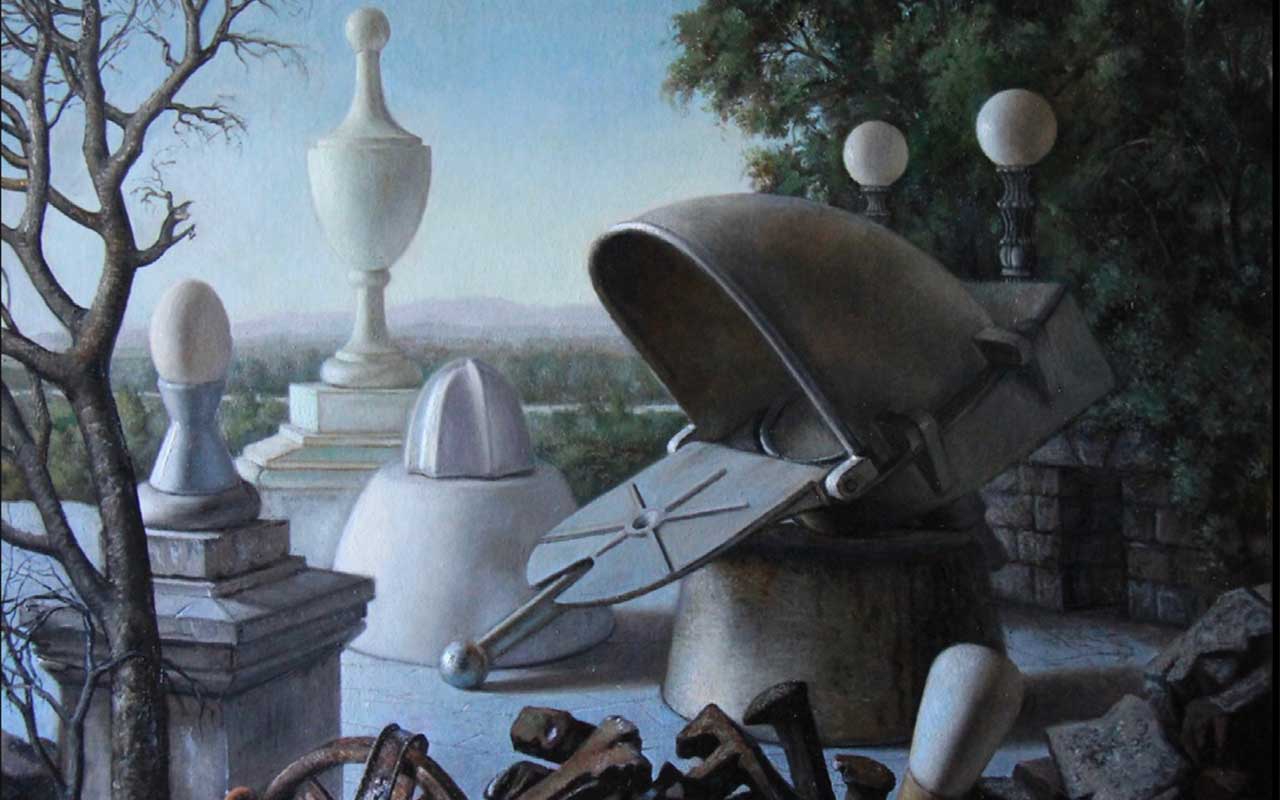