ASAP!, the Washington Depot based non-profit arts organization that reaches over 9,000 children and adults a year throughout Connecticut, is honoring students in grades 6-12, including home-schooled students, throughout the State this year for their artistic prowess. This past week, ASAP!’s 15th annual Celebration of Young Writers invited students to submit poetry and prose. This summer, the organization will do the same for young photographers when it presents its 10th annual Celebration Of Young Photographers. The selection process for Celebration of Young Writers involved a blind panel of judges who selected pieces where names and schools were removed. ASAP! received over 150 submissions from 55 schools and home-schooled students throughout Connecticut.

ASAP! says the annual Celebration of Young Writers was inspired by the organization’s passion to encourage children’s creativity and imagination in the literary arts and was established with the help of Ellen and Frank McCourt, Ann and Denis Leary, and Susanna Salk as a way of supporting a love of writing. The following names are the top thirty-two 2020 Celebration of Young Writers selections from each grade level: 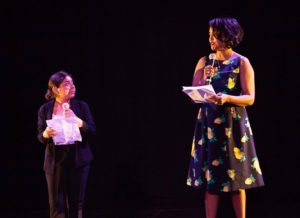 Congresswomen Jahana Hayes and 2018 Celebration of Young Writer Laura Gutaman of Bethel High School reading her selected piece Stones Carved Out Of Bullets at ‘One Night Only’ ASAP! Celebrates 20 Years. 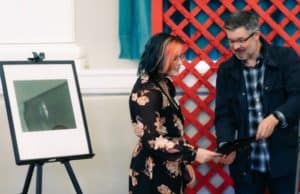 This year, instead of ASAP!’s traditionally live ceremony, they are presenting a pre-recorded event featuring the top 12 young writers of 2020. This event will be presented by guest host, Congresswoman Jahana Hayes, and released in August. All top 32 writing submissions will be published on the ASAP! website following the Celebration of Young Writers event in August.

Late last month, ASAP! presented the Summer Photography Guidelines for its 10th annual Celebration Of Young Photographers with a public exhibition tentatively planned for Sunday, November 15, 2020 at 2 pm at Bryan Memorial Town Hall in Washington Depot. ASAP! says this year’s theme, aptly title Quarantined, was selected to inspire students to focus on images that represent their unique perspective on this unprecedented time in our world, and frame how they feel about the changes that have been forced upon them to experience. A panel of judges made up of professional artists and photographers will once again jury the show. The top four photographers will be given special recognition through the 2020 Dylan’s Wings Photography Award. Named in honor of Dylan Hockley, who was a victim of the mass shooting at Sandy Hook Elementary School on December 14th, 2012.

For details on how to view ASAP!’s virtual Celebration of Young Writers, visit the ASAP! website and social media platforms.

The deadline for submissions is October 1, 2020. More details about submissions, prizes, and opportunities will be announced in the Fall. Guidelines for the event may be found by visiting asap.org/celebration-of-young-photographers.