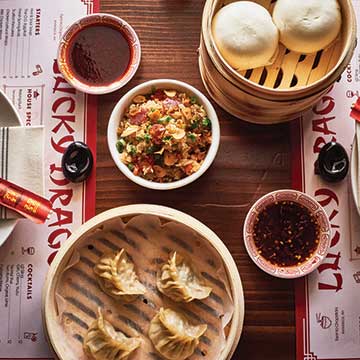 A red door embellished with a fierce gold dragon and shiny nail-heads greets guests at Lucky Dragon – a stylish Chinese restaurant that invites foodies to enjoy a “farm-to-chopsticks” experience in Rhinebeck, NY. The Asian-inspired dining destination, which was unveiled in April 2019, is accented with a kaleidoscope of bold, colorful lanterns, as well as images of Buddha and the ubiquitous “beckoning cat” that is believed to usher good luck to Asian businesses.

Founded by husband-and-wife team Howard and Chris Jacobs, Lucky Dragon is the brainchild of the same duo who launched The Amsterdam in 2017. Just like a cherished recipe brimming with ingredients that mingle harmoniously, the team’s vision, creative energy, and lifetime experiences were well aligned for this culinary debut.

The Jacobs have a vast appreciation for other cities and cultures. Although they trace their roots back to Toronto, Canada – a thriving metropolis with one of the largest Chinese/Asian populations in North America, they’ve also called New York City and San Francisco home. After enjoying a weekend home in the Hudson Valley, the couple decided to make this area their home.

Howard reflects upon his early childhood in Toronto, “Chinese cuisine was a weekly standard in my home. Every Sunday, we either went out for Chinese food or ordered take-out.” Fueled by a lifelong passion for the culture and cuisine, Howard and Chris yearned to bring elevated Chinese fare to Rhinebeck.

When conceiving the plan, the Jacobs tapped the expertise of Alexander Burger, executive chef of The Amsterdam. He now serves as executive chef at Lucky Dragon as well. Prior to joining The Amsterdam, Burger spent more than eight years working with esteemed chef Daniel Boulud of Daniel fame – the Michelin two-star restaurant in Manhattan.

After the stint at Daniel, Burger immersed himself in the cultures, cuisines, and exotic flavors of Thailand, Hong Kong, Kuala Lumpur, and Singapore. He enjoyed cooking and getting acquainted with the cultures and cuisines of these faraway places. He also worked with a host of Michelin star chefs in cities across the globe including Bilbao and Moscow. Later, he returned and became the executive chef of Bar Boulud.

The sprawling farms and local bounty of the Hudson Valley is what inspired Lucky Dragon’s “farm-to-chopsticks” sensibility. When creating the menu, Burger drew from Mandarin, Cantonese, and Sichuan dishes, but utilized fresh, local ingredients. “For us, ‘farm-to-chopsticks’ is a recognition that the ingredients are the real story here,” reveals Howard.

Lucky Dragon’s menu, which has been described as “Chinese comfort food,” features locally sourced ingredients that arrive fresh daily. Its array of classic Chinese dishes are presented with an innovative twist and have varying degrees of spice and a range of aromatics.
The Lucky Dragon team also includes executive sous chefs Angelyne Schofield and Stef Torres. Together, under Burger, they lead the day-to-day operations. Both have previous experience at The Amsterdam.

Schofield and Torres were well suited for their roles at Lucky Dragon. Well before Howard and Chris planned the launch, Schofield and Torres enjoyed taking weekly trips down to New York City to indulge in the exotic flavors of Chinese cuisine, specifically soup dumplings and bao buns.

Its House Special is Peking Duck, which features a local Rohan Duck that is blanched in rice vinegar, Shaoxing wine, and honey. It ages for a week before being slow roasted until crispy. The duck is carved Cantonese style and is served with bao buns, hoisin sauce, scallions, pickled cucumbers, and carrots. The remaining meat is then used for Peking duck fried rice. The process encompasses different techniques and flavors Burger gained through his travels in Asia. The dish must be pre-ordered and cooks on a rotisserie in open view of guests.

Lucky Dragon just introduced a Dim Sum brunch, which is available from 11am to close on Saturdays and Sundays. A full dinner menu is also available all day on weekends.

When sourcing ingredients, the team works with local purveyors with a mission to incorporate quality produce from the Hudson Valley. Some of the fresh vegetables sourced here include snow peas, carrots, onions, and peppers. They also scout out the best bok choy, Chinese broccoli, and water chestnuts from Asian markets in both New York City and Albany.

Some of Lucky Dragon’s signature handcrafted cocktails include the LD Sling (gin, cherry, and yuzu); Tie Mai Thai (boasts two different rums, orgeat, and a splash of lime); and the Five-Spice Margarita (tequila, Chinese Five-Spice, and yuzu). A selection of wine, beer, and cider completes the offerings.

Beyond Lucky Dragon’s delectable cuisine and chic interior is a new after dark scene for summer and autumn. At press time, the Jacobs were preparing for the debut of the backyard space, which is scheduled to open on the weekend of July Fourth. It will feature a Chinese garden along with table- and bar-seating. An outdoor service location will keep wine, beer, and cocktails flowing.

On Fridays, Saturdays, and Sundays, Lucky Dragon will be open until midnight or later. Beyond the drinks, a limited food menu features special appetizers and classic dishes in small portions. Music and fun videos will enhance this hip yet casual al fresco experience.

As for special events, a special sake event will be held in July, and a wine and beer event in August. Experts from the winery and brewery will be on hand, and special dishes will complement the program. Once a month, Lucky Dragon will offer thematic tasting events, which will usher in a host of other chefs who will work alongside Burger, Schofield, and Torres.

Lucky Dragon kicks things up a notch with a drag queen bingo event being offered in July, August, and September. “It’s about the food, but it’s also about being around the table having fun with friends and family,” concludes Howard.

For updates and details on events, visit getluckydragon.com. Reservations are recommended and can be made through the website.