Making Heroes of Us All 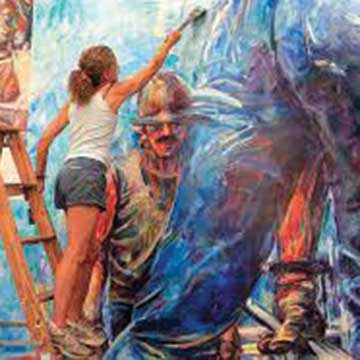 It was an audacious idea from the very first whisper: create the largest indoor collaborative art project in the world that celebrates the life force of America. Sounds simple enough!

The American Mural Project – a collaborative work of art that, when finished, will span 120 feet and be 48 feet high. It will be 10 feet deep in sections, housed in converted mill space in Winsted, CT, and the centerpiece of an educational project that would reach coast-to-coast.

When Ellen Griesedieck, a career sports photographer and artist, was working on a series of portraits of workers including construction workers on the West Side Highway project in New York City, she had the opportunity to fly cross-country to watch the fabrication of one of Boeing’s massive 747 planes.
And, it suddenly clicked.

Why not create a tribute to the men and women who have truly built America through their daily efforts … their jobs … their vocations … their dedication? Dwarfed by the scope of the assembly effort for the massive plane, Ellen allowed the spark of an idea to grow, unabated. What Studs Terkel had done in his columns and landmark book Working, Ellen would reflect in a mural.

Years earlier she had visited the Watts Towers in LA – the amalgam of concrete, steel, ceramics, glass, and many other components contributed by local children that was created by Simon Rodia and grew from a simple project to a commanding statement on the celebration of immigrants’ freedoms. A celebration of the fabric of America needed to be commanding and, like the Towers, it should combine artistic expression with the involvement of children.

And, the work began – massive paintings fashioned in Ellen’s studio on the property she and her husband, artist, race car driver, sports commentator, and architect Sam Posey share in Sharon, CT. The canvases were huge. The concept began with sketches and hours of discussion and became models and outlines of the kinds of individuals and the projects that should be memorialized in this heroic effort.

The subjects are the stalwart workers of America – the taxi driver, the fire fighter, the policeman, the auto worker from Ford’s River Rouge plant in Detroit, and cowboys from a Montana ranch. “It always starts with people,” Ellen reflects. “Just getting to know them opens doors … and the paintings emerge from there. It’s Abstraction meeting Realism.”

Reality has a bold way of intersecting with dreams, however, and it became clear that the ultimate presentation of this audacious concept would need to be purpose-built. After all, where does one find a building with a wall nearly half the size of a football field and four stories high?

Once an active mill town and home to the once world-renown Gilbert Clock Company, two rapidly sequential hurricanes in 1955 had devastated the downtown area and changed the profile of the town. Once vibrant mills stood empty. Two of the available buildings stood on three acres proximate to Route 44, a major highway.

The American Mural Project acquired those two buildings in 2006 and began what was another audacious project – collecting the financial support required to completely re-do the buildings – one to house the massive mural and one to be a visitors’ center and educational facility.

The effort was more than simply cleaning and applying a new coat of paint. To house the mural, the roof of the first mill building needed to be raised 25 feet. Extensive steel work was required to not only support the massive mural panels, but to provide walkways, balconies, and ramps that would accommodate visitors. That’s a massive engineering and construction project, so fired by her commitment to making the American Mural a reality, Ellen set to work.

Contributions from individuals who shared Ellen’s vision and grants from foundations like Newman’s Own, Aetna, Alcoa, The Home Depot, the AG Foundation, The Community Foundation of Northwest Connecticut, and several family foundations were an essential part of the plan, as was a potential matching funds grant from the State of Connecticut. The state grant was to be a match, so the effort to generate the trigger funds was consuming … but ultimately successful.

Scope Construction began the renovations in March of 2017.

Creating the mural was a massive task, not only requiring the seemingly boundless energy of Ellen, but also others – young to old – who wanted to be part of the dream. The educational project that had been part of the effort from the beginning has taken shape with over 15,000 students from across the country engaged in programs relating to and sponsored by The American Mural Project. When it is completed, one project from students in each of the 50 states will be part of the mural.

A locally-based summer camp series blends art and nature in a way that is both educational and entertaining. A “build camp” provides coaching and encouragement as campers actually complete a construction task that blends into the entire concept of celebrating work. An after-school arts program, ASAP!, linked internationally celebrated dance company, Pilobolus from Washington, CT, with the Project and created a unique public fusion at Torrington’s Warner Theatre each year.

It is evident that the project continues to move toward the ultimate goal of inviting the world to see how America works, and that effort has been supported by some very loyal and strong partners. The American Mural Project website lists the foundations, corporations, and individuals who share Ellen Griesedieck’s imaginative vision and want to ensure that the vision becomes reality … and the reality is available to all in a converted Winsted mill building. A recently announced project grant from the Connecticut Office of the Arts will underwrite programs into 2020.

The most obvious question that arises from encountering The American Mural Project is “When can I see it?” Still a work in progress, Ellen is hopeful that beyond the occasional hosted visit, there will be times toward the end of 2019 and well into 2020 when “moments” will be announced when the public can come to look and hear what is happening in the Northwest Corner of Connecticut.

While work continues – portions of the mural have been hoisted into place with the help of cranes and the dedication of volunteers who seemingly would not miss any chance to watch the masterwork take shape – there are projects both local and national that engage young minds and talents. A staff has been assembled of arts educators and administrators who coordinate the educational outreach while Ellen continues to work on the massive task of incorporating heroic sized paintings into the mural. “The George Washington Bridge is huge. It’s going to be comprised of four layers,” Ellen says with the contagious smile that seems to be her constant companion.
A recent fundraising evening held in the shadow of the mural, combined a “recycled runway” – an eclectic assembly of fashion items made of recycled and discarded components – with the opportunity to see just how far the work has come. There was music and dancing and laughter and the underlying sense that from the spark of an idea struck 20 years ago at Boeing in far-off Seattle, WA, a powerful dream is coming to life on Whiting Street in Winsted, CT.

Follow The American Mural Project at www.americanmuralproject.org or call ahead (860) 379-3006 to find out about educational programs or the next opportunity you might have to see the work for yourself.