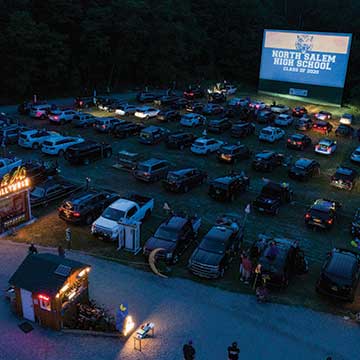 In May of last year, I wrote a story on the forgotten treasure that is the American drive-in movie experience. How this bit of the country’s flawed but authentic mid-twentieth century culture had been quietly capitulated by the easily accessible digital grab-bag of the modern moviegoing experience. Still, the story revolved around the enduring legacy of the drive-in theatre through the decades and how its distinctiveness between movie watching, and movie outing has forged an ineffable bond between cinema, the outdoors, and our desire to seek out what is different and unique. Particularly in the Hudson Valley where what once was, has, and in some ways, always will remain.

It is uncanny how the gears of time turn imperiously to change our perspective. Just one year later, the nature of going to the movies has been fundamentally uprooted from our collective conscience. Not long ago, the prospect of a crowded theater meant a charged evening of anticipation among groups of strangers ready to collectively lose themselves together for 90 minutes of adventure, thrills and drama. In 2020, that same idea would fill many folks with feelings of fear and nervous anxiety, and unfortunately it has nothing to do with any story being told on screen. The human experience, history, and thus fate never fails to carry with it an enduring sense of irony.

In a time when daily life seems to have been immeasurably altered by a persistent sense of uncertainty and small business owners across the area continue to defiantly push the boulder of financial hardship uphill, entertainment has become as critical as it is elusive. The confluence of the summer season – one of the most beautiful and beloved in our area – and the oppressive nature necessitated by our new walled-in existence has many longing to reconnect with the outside world. Add our lingering sense of escapism and a newfound persuasion for socially distancing – and just like that – the drive-in has shaken off its rusty shackles of yesteryear and become the contemporary moviegoing experience once again.

The social media age has attempted to redefine what the American culture has been and could be at the productive behest of some, and to the detriment of others. Yet miraculously, one of most enduring visages of the nation’s popular culture past has regained its strength on the back of classic American enginuity, inventiveness, and its communal sense of commonality.

In Amenia, NY, a band of brothers has brought one local drive-in to prominence as the go-to destination for those longing for that classic cinematic adventure that we accord with one another – while maintaining a safe distance.

A vision of the past

“When my brother and I began this adventure in Amenia, we had no knowledge of the drive-in movie industry – in fact, I had never been to a drive-in in my life,” says owner John Stefanopoulos who, along with his brother Paul, started entertaining the ideas that would eventually become the Four Brothers Drive-In Theatre.

The young Stefanopoulos brothers may have had little knowledge of drive-in culture, but their local lineage gave them the distinct advantage of generations of entrepreneurial ambition. The first iteration of the Stefanopoulos brothers emigrated from Greece in the early 1970s and their strong family unity and unique ambition prompted the opening of their first restaurant in 1972 in Connecticut. By 1974, the brothers owned five restaurants and their soon-to-be famous pizza recipe was founded at the Brothers Pizza location in Lakeville. Today, the elder brothers have expanded to nine Four Brothers Restaurants while adding The Boathouse in Lakeville, CT, and in New York both The Millerton Inn and The Chatham House. The family uses their local farm to supply the restaurants with certain dairy products and their olive orchards in Greece for olive oil.

Backdropped by the incredible success story of their father’s uniquely American immigrant ambition, John and Paul, sons of William, have captured their familial drive to carve out their own niche in a market formed by something distinctly Americana. “My brother and I started an ice cream shack that was essentially a shed on the property juxtaposed to an empty lot outside our family’s restaurant here in Amenia,” says John. “It wasn’t until we were interviewed for an article in the local paper about the ice cream shack itself, where I casually mentioned the idea of a drive-in, that things began to get serious. Our customers simply wouldn’t let us forget about it, they really drove the impetus for what it has become today.”

From long shot to close-up

Fueled by their own market research, the young entrepreneurs began designing the drive-in in 2013. “Everything was very primitive in the beginning,” reflects John. “We had an undersized projector and cables running through the field that customers would occasionally run over with their vehicles and disrupt the signal. Generally speaking we had no idea what we were doing.”

Aside from the technical difficulties of having temporary screens and projectors that only ran second-run films, the brothers were uncertain if the town itself would serve Hudson Valley moviegoers the way they intended. “Honestly, Paul and I had no idea how things would work out in Amenia either,” says John. “We had been lucky enough at that point to have done some traveling around the world and we had acquired a certain aesthetic style that interested us and felt if we could mold the drive-in to fit that aesthetic, it would set us apart.” What has come from that vision is a style that has made the Four Brothers Drive-In Theatre a veritable destination for travelers everywhere.

With a genuine mix of retro decor and a folksy, down-to-earth presentation that coincides with a strong sense of the Main Street bohemian vibe that has surfaced in many small towns across the area, the Four Brothers Drive-In offers a unique boutique-like experience and atmosphere.

“I feel incredibly lucky to have been raised in a family of business owners that have passed down the value of honest customer service,” says John. “Nothing works without a genuine sense of hospitality and the understanding that every customer can teach you something that will help you grow.” Surely that principle has come to life in the wide variety of attractive options the drive-in offers. From camping in the perfectly situated Airstream trailer that nestles in repose on the corner of the treeline facing the screen complete with an outdoor firepit, to car-hop service, creative food options from the former ice cream shack, live music, graduations, weddings, fundraising, and charity events – the drive-in has become an all-inclusive experience.

“In order to survive in our growingly competitive area of the Hudson Valley, you must fully commit to what makes you unique,” says John. “It must become a destination, rather than a pit-stop. Some of the most motivating things to hear is when a customer tells me they feel like they’re on vacation or they feel as though they have been transported to a different time period.”

An unlikely comeback in a changing world

As the winds of change began to blow upstate in early March, driven by an uncertain future and a changing cultural paradigm, like many local businesses, Amenia’s drive-in became nervously anxious. “It was a gut-punch,” says John. “We were open for three weeks, and then the first week of March hit and we had to close down. It was heartbreaking because we have always striven to be the first drive-in to open and the last to close.”

As the impossibly long weeks slowly crept by, John and Paul applied for a waiver from the State and waited nervously for nearly two months through the spring. “The entire time my crew and I held out nervous hope because we knew we could make things work if we were allowed to re-open,” recalls John. “Mostly because the drive-in experience is organically designed for folks to enjoy themselves at a distance.”

Another aspect that undoubtedly buoyed the hopes of the beloved drive-in was the seemingly endless stream of inquiries from locals and travelers alike who all seemed to collectively sense the time had come to return to the sentimental American experience. “We were inundated with emails and social media messages from people throughout the area longing to get outside and as a result, begging us to open – consequences be damned,” says John. “Clearly the demand was there and we understood that when we reopened we would be busy, but the response has been overwhelming.”

Indeed, the cautious re-opening of the drive-in while only featuring second-run movies and only permitting guests to leave their vehicles for the bathroom in the beginning, opened the floodgates to the people of the Hudson Valley, making the Amenia drive-in the surprise smash hit of the summer. “It ended up being one of the most exciting productions I have ever experienced despite our nervous anxiety about ensuring everyone’s safety,” says John. “We were ready to endure this pandemic without even knowing it.”

Perhaps it’s John’s determined optimism that reflects the nature of the drive-in’s cultural comeback nationwide. The patient endurance of an industry and a people to withstand a barrage of growing technology and withering attention spans in favor of remaining simply what it is – a fully engaging experience.

“I’ve felt for awhile that mainstream American commercialization has been coming to the end of its life cycle,” says John. “At this moment, we could fill the drive-in three times over because of the demand, but we like being tucked in by the Hudson Valley landscape. This area is a gateway for everyone searching for unique and interesting finds and the film industry itself represents the desire for people to interact with each other and share something in common. Our foundation here is built by being outdoors. Going to the drive-in is about more than the film, it’s about coming here to feel the experience of an evening together.” To learn more, visit www.playeatdrink.com. 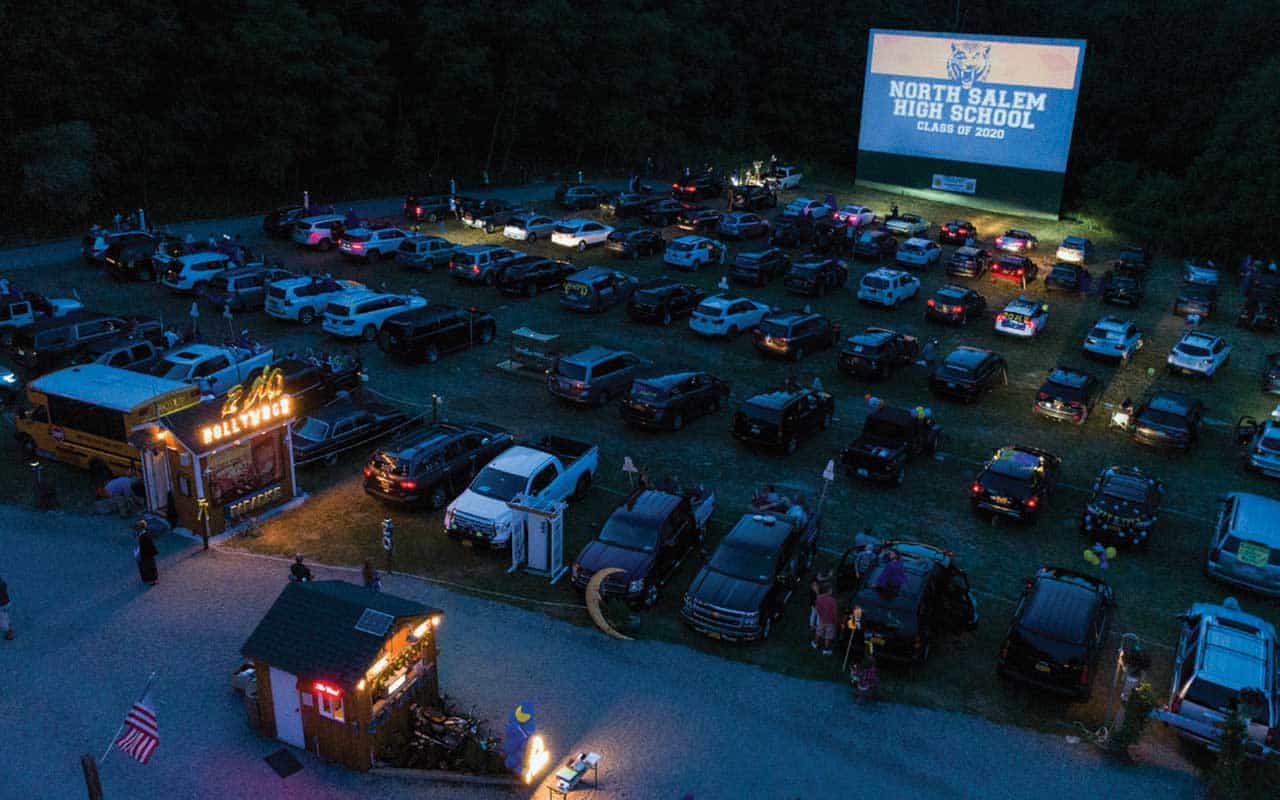