There is an ethereal elegance to Eric Forstmann’s work – an almost hypnotic aura that brings viewers back again, and again. And, each time, they are rewarded with another whisper of an idea … a moment of discovery that may bring a smile or simply be celebrated with a shake of the head.

His iconic painting of dress shirts hung on wood and wire hangers against a blank wall (Five Shirts at 3:17 PM, depicted on the opposite page) is so precise in its folds and wrinkles and pristine light source that casts perfect shadows, the urge to return to discover another nuance is compelling.

Is there a reason that two of the shirts are on wire hangers, one on a plastic hanger, and two on miss-matched wooden ones? Three hangers reach left while two reach right. Symbolism? Coincidence? Or, does the presentation belie the sense of whimsy that seems to appear, without warning, in many of Forstmann’s paintings? 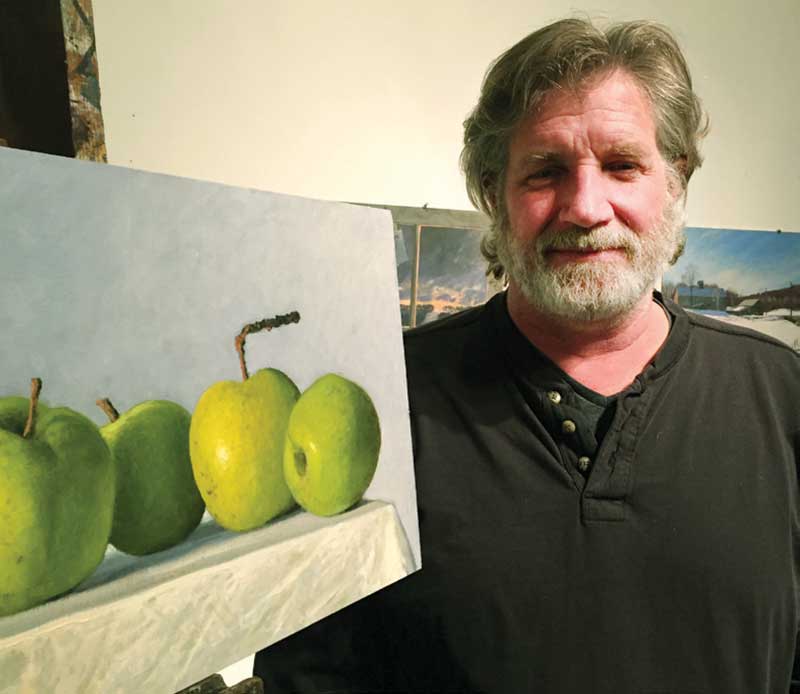 There have been several iterations of the hanging shirts theme, each with its own mystique and attraction. It appears, in looking across a body of his work, that certain images – the hanging dress shirts, crab apples, household utensils – keep drawing him back as subjects. Each piece is different, engaging and somehow reassuring.

Walking through the cornfields, looking down

Reared in Warren, CT, he traveled for school to the School of the Museum of Fine Arts in Boston, MA, the beginnings of a career living in Hoboken, NJ, and approaching the New York City art scene, and has returned to familiar territory, living in Sharon and working out of a second story studio in Torrington, CT.

“As a child, I learned a great deal from my mother,” reflects Forstmann. “When she needed a break or a change of pace, she would walk through neighboring corn fields and search for arrowheads. She had a great eye and an overwhelming sense of curiosity. I was a student of both.”

One of four brothers, Forstmann recalls that there were always art supplies available at home. Encouragement was plentiful to move experience and vision into artistic presentation. “It was going to happen,” he reflects on a career in art. “I don’t think I ever had a clear idea of what the direction would mean … but it was always there.”

Perhaps it was the organic simplicity of those walks in cornfields and the appreciation for the common, the everyday, that had the greatest influence on Forstmann as a young artist. “I learned at an early age that even the most common things have value. It all depends on how you put them together.”

The discipline of the teaching studio

Entering the School of the Museum of Fine Arts in Boston, no small feat for a budding artist, he had the benefit of learning from such luminaries as Barnet “Barney” Rubenstein, a celebrated figurative painter whose style was restrained and very steady; and Henry Schwartz, heralded as the greatest of the second generation of Boston Expressionists. Schwartz’s comment about himself – “my imagination wanders everywhere” might well be linked to Eric Forstmann, as well.

“I think I sold my first painting as a sophomore,” recalls Eric, who moved from Boston to the greater New York area on graduation. “One of the things I’d picked up was trompe l’oeil painting (from the French meaning ‘deceive the eye’), and when we moved to New Jersey, I decided to see if the market could accept my work.”

Trundling off to Mabel’s on Madison Avenue – a gallery that specialized in trompe l’oeil furniture – he dropped off a stool, presuming that in four to six weeks he’d return to pick it up. “By the time I got back to Hoboken, the phone rang. The piece had sold, and so I began the journey.” Forstmann recollects that he sold over 400 of his painted stools and tables, creating a base to support a burgeoning family and solidifying an artistic style that he has continued to evolve in his studio work.

As the Forstmann family grew (he has four children) a move from apartment living to a house in the country became a goal. Having grown up in Warren – “I worked one summer cleaning Philip Roth’s pool while he worked in his ‘writing shed’” – Eric knew and loved the hills and river valleys of the area.

There seemed to be no difficulty in getting gallery showings for his work after his first solo show in Sharon, CT, in 1994, and as the family grew and Eric continued to create whimsical paintings, his audience of appreciative collectors grew.

“Don Gummer had bought one of my paintings as a gift for his wife, Meryl Streep. It was hanging in their home when they entertained Jane and Henry Eckert one evening.” The Eckerts thought so much of the painting that they sought Eric out and invited him to be represented by their gallery. So began a love story that has continued to the present. For those searching for an Eric Forstmann original, the place to look is Eckert Fine Art, both in their Kent gallery and their online presence.

Out of the studio

Though schooled in the disciplines of still life painting and adding the techniques of trompe l’oeil to his mastery, Forstmann has long been fascinated with the wider landscape as a subject for his work. A fascination with the artistic mastery that emulates three dimensions in a two dimensional medium has carried Forstmann into landscape painting.

“I was looking for a location where I could get real 3-D perspective on the hills that border the river valleys.” A chance trip up Kildonan Mountain in New York provided just the perspective he was seeking.

“I’d drive up there almost every day,” he recalls, “to get a sense of the depth of succeeding mountain ranges and the great serenity of the river valley, below.”

There was, however, a cumbersome issue about painting en plein aire. It would not be enough to merely take a photograph and retreat to the studio. The real sense of dimensionality was captured in place … on the mountain looking off in the distance. There, Eric could delineate three to five levels of the landscape – just what his painting style needed to create  real depth and character.

The physical restrictions of standing behind a canvas mounted on an easel and having to step aside every few moments to capture another glimpse of the landscape was frustrating. “So my brother and I designed and built an easel that could handle a four by five foot canvas, but angle it so I could paint and merely look up at the scenery.”

The Hudson Valley became one of Forstmann’s regular subjects and by the late 1990s his work was balanced 50/50 between still life paintings and expansive landscapes that capture the seasons, the light and the majesty of the regional landscape.

As the marketing of art has changed in dynamic and venue, Eric Forstmann’s relationship with Eckert Fine Art has morphed and matured. A major presence at an up-coming art fair will be heralded by an ad in Architectural Digest, the great arbiter of art and design. Each year, Eckert Fine Art hosts a sweeping show of Forstmann’s work, and the eager collectors gather to see how this master has taken the common and turned it into something beautiful. •